Cirrhosis is an irreversible change of the liver architecture, characterised by nodules of regenerated liver cells separated by bands of fibrous scar tissue.

Cirrhosis is an irreversible change of the liver architecture, characterised by nodules of regenerated liver cells separated by bands of fibrous scar tissue.

Cirrhosis results from continued hepatocellular necrosis and chronic inflammation. Fibrous scarring causes disruption of the normal architecture, although regeneration of hepatocytes occurs between the fibrous tracts, their function, which depends on intact architecture, is impaired.

·        Viral hepatitis due to hepatitis B and C is the most common cause worldwide.

All the liver functions are impaired (bilirubin metabolism, bile salt synthesis, specialised protein synthesis, detoxification of hormones, drugs and toxins). Impaired blood flow through sinusoids leads to an exacerbation of the functional deficit and portal hypertension. Feminisation in males and amenorrhea in females are common in alcoholic liver disease and haemochromatosis due to alterations in the hypothalamic–pituitary–gonadal axis. Reduced immune competence and increased susceptibility to infection also occur.

3.     Abdomen: Dilated veins around the umbilicus, striae may result from abdominal distension. The liver is usually enlarged, firm and irregular, but is shrunken in late disease. The spleen may be enlarged due to portal hypertension. Ascites may be present.

The liver is often enlarged and nodular, with a bosselated surface. The cut surface shows nodules of liver tissue, separated by fine or coarse fibrous strands. Micronodular cirrhosis consists of nodules less than 3 mm, if larger nodules are seen it is termed macronodular cirrhosis. 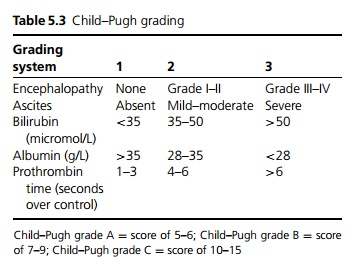 Aimed at diagnosis of underlying cause and assessment of severity/degree of reversible liver injury. The severity of liver disease may be graded A–C by means of a modified Child–Pugh grading system (see Table 5.3). Liver biopsy is often required for assessment.

Treatment is largely supportive. Withdrawal from alcohol is essential in all patients. Malnutrition is common and may require nutritional support. Liver transplantation may be required when end stage liver failure occurs.

Cirrhosis is an irreversible, progressive condition which often continues to end-stage liver failure despite the with-drawal of precipitating factors. The higher the Child– Pugh grade, the worse the prognosis, particularly for death from bleeding varices or following surgery.