Hepatitis B (HBV) is a predominantly sexually or vertically transmitted virus, which causes hepatitis.

Worldwide 300 million people carry the hepatitis B virus, 1 million die annually from HBV-related disease. In the United Kingdom it is uncommon: 0.1–2%.

More common in the developing world with highest levels in Africa and SE Asia.

HBV is a dsDNA virus of the hepadna group.

Vertical transmission is the most common route in high endemic areas. It occurs at or after birth and is most common in babies of e-antigen positive mothers.

Post exposure prophylaxis has reduced this transmission in the developed world.

Horizontally transmission occurs between young children in the developing world possibly through a minor skin break or close bodily contact with affected children.

Sexual intercourse: The virus is most readily transmitted by rectal intercourse. At risk individuals include those with multiple sexual partners. Barrier contraceptive methods prevent transmission.

Blood-borne transmission may occur with transfusions, other blood products or at organ transplantation. All blood and transplant donors are screened in the United Kingdom. Nosocomial infections may occur due to needle stick injuries or contaminated instruments.

The incubation period is approximately 2–3 months. The virus is not cytopathic, the liver damage is immune-mediated by the cytotoxic T lymphocytes response to viral antigen expressed on the surface of liver cells during the period of viral replication. The mechanisms of 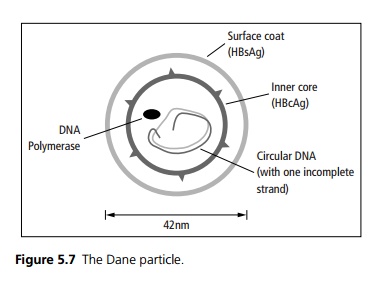 The Dane particle is found in the serum of HBV-infected patients, its presence denoted by HBsAg. This denotes when there is first a viraemia.

·        HBcAg is found in the nuclei of liver cells, where HBV replicates.

·        The e-antigen or HBeAg is related to the core proteins. The presence of the e-antigen denotes active viral replication. It is detectable in acute hepatitis, chronic active hepatitis or in high infectivity carriers (supercarriers). Conversely, anti-HBe antibodies indicate a better prognosis.

·        Carrier status is defined as presence of HbsAg for more than 6 months. Carrier status is associated with chronic hepatitis in people with lowered immunity and with neonatal or childhood infection. It has also been noted that patients who present with jaundice during the acute infection rarely convert to a carrier status, compared to those who have an anicteric acute hepatitis.

Hepatitis B can cause a range of clinical disease, from asymptomatic to fulminating hepatic failure or chronic hepatitis. The likelihood of these conditions depends on the age of the patient:

·        Neonatal infections are normally asymptomatic (98%), but often become chronic with a 40% risk of developing cirrhosis.

Increased risk of cirrhosis and hepatocellular carcinoma. Carriers may develop extra-hepatic disease, such as glomerulonephritis in children and polyarteritis no-dosa following chronic hepatitis. These may be due to immune complex formation.

In carrier states the HBsAg remains high with an absence of anti-HBs indicating continued presence of virus. If the e-antigen (HBeAg) remains present and there is no anti-HBe, there is active viral replication indicating a super-carrier or high-infectivity state. Presence of anti-HBs alone (without other antibodies) indicates a previous successful vaccination.

In patients with chronic high infectivity (HBeAg positive) and the evidence of active hepatitis (elevated ALT) interferon α can be used. If there is no response or relapse following treatment, nucleoside analogues and other antiviral drugs can be tried.

Vaccines are available which are effective:

·        Active immunisation by recombinant protein (HB-sAg made in yeast cells) is given to at risk individuals including health-care workers and in areas of high prevalence. The WHO recommends that hepatitis B vaccine should be included in routine childhood immunisation schedules for all children in all countries.

Up to 40% eventually die from liver disease.