Before we delve into the details of microprocessor instruction sets, it is helpful to develop some basic terminology. We do so by reviewing taxonomy of the basic ways we can organize a computer.

A block diagram for one type of computer is shown in Figure 1.9. The computing system consists of a central processing unit (CPU) and a memory.

The CPU has several internal registers that store values used internally. One of those registers is the program counter (PC), which holds the address in memory of an instruction. The CPU fetches the instruction from memory, decodes the instruction, and executes it.

The program counter does not directly determine what the machine does next, but only indirectly by pointing to an instruction in memory. By changing only the instructions, we can change what the CPU does. It is this separation of the instruction memory from the CPU that distinguishes a stored-program computer from a general finite-state machine.

The program counter points to program memory, not data memory. As a result, it is harder to write self-modifying programs (programs that write data values, and then use those values as instructions) on Harvard machines. 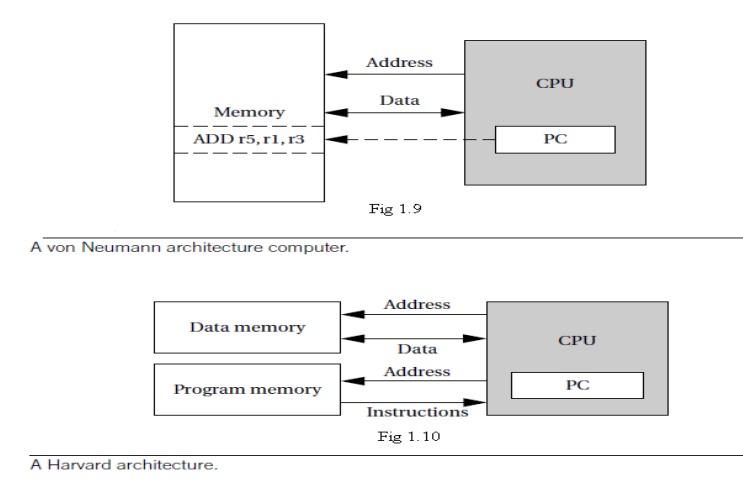 Processing signals in real-time places great strains on the data access system in two ways: First, large amounts of data flow through the CPU; and second, that data must be processed at precise intervals, not just when the CPU gets around to it. Data sets that arrive continuously and periodically are called streaming data.

Having two memories with separate ports provides higher memory bandwidth; not making data and memory compete for the same port also makes it easier to move the data at the proper times. DSPs constitute a large fraction of all microprocessors sold today, and most of them are Harvard architectures.

A single example shows the importance of DSP: Most of the telephone calls in the world go through at least two DSPs, one at each end of the phone call.

One of the advances in the development of high-performance microprocessors was the concept of reduced instruction set computers (RISC).These computers tended to provide somewhat fewer and simpler instructions.

The set of registers available for use by programs is called the programming model, also known as the programmer model. (The CPU has many other registers that are used for internal operations and are unavailable to programmers.)

Different CPUs may offer different clock speeds, different cache configurations, changes to the bus or interrupt lines, and many other changes that can make one model of CPU more attractive than another for any given application.

One instruction appears per line.

Labels, which give names to memory locations, start in the first column.

Instructions must start in the second column or after to distinguish them from labels.

Comments run from some designated comment character (; in the case of ARM) to the end of the line.

Assembly language follows this relatively structured form to make it easy for the assembler to parse the program and to consider most aspects of the program line by line. ( It should be remembered that early assemblers were written in assembly language to fit in a very small amount of memory.

Those early restrictions have carried into modern assembly languages by tradition.) Figure 2.4 shows the format of an ARM data processing instruction such as an ADD.

An example of a pseudo-op is one that allows data values to be loaded into memory locations. These allow constants, for example, to be set into memory.

An example of a memory allocation pseudo-op for ARM is shown in Figure 2.5.TheARM % pseudo-op allocates a block of memory of the size specified by the operand and initializes those locations to zero. 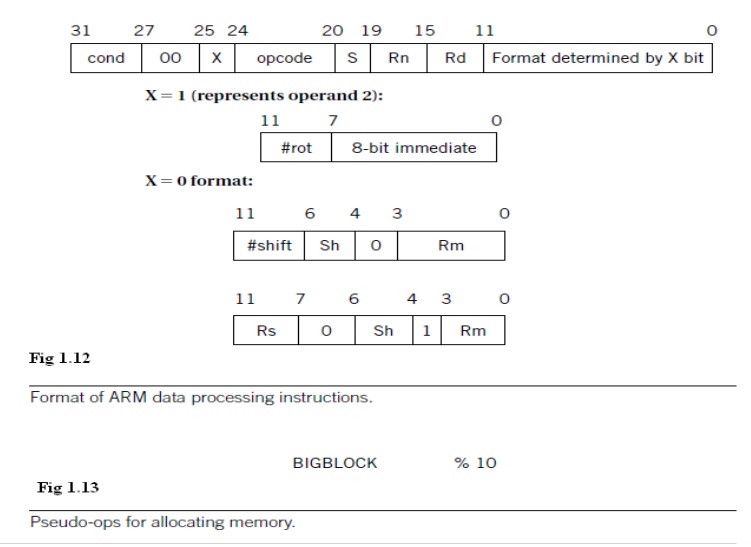