Visual language that can be used to capture all these design tasks: the Unified Modeling Language (UML). UML was designed to be useful at many levels of abstraction in the design process.

Visual language that can be used to capture all these design tasks: the Unified Modeling Language (UML). UML was designed to be useful at many levels of abstraction in the design process. UML is useful because it encourages design by successive refinement and progressively adding detail to the design, rather than rethinking the design at each new level of abstraction.

It encourages the design to be described as a number of interacting objects, rather than a few large monolithic blocks of code.

At least some of those object will correspond to real pieces of software or hardware in the system. We can also use UML to model the outside world that interacts with our system, in which case the objects may correspond to people or other machines. It is sometimes important to implement something we think of at a high level as a single object using several distinct pieces of code or to otherwise break up the object correspondence in the implementation However, thinking of the design in terms of actual objects helps us understand the natural structure of the system. Object-oriented (often abbreviated OO) specification can be seen in two complementary ways:

Object-oriented specification allows a system to be described in a way that closely models real-world objects and their interactions.

Object-oriented specification provides a basic set of primitives that can be used to describe systems with particular attributes, irrespective of the relationships of those systems’ components to real-world objects.

A specification language may not be executable. But both object-oriented specification and programming languages provide similar basic methods for structuring large systems.

Unified Modeling Language (UML)—the acronym is the name is a large language, and covering all of it is beyond the scope of this book. In this section, we introduce only a few basic concepts. In later chapters, as we need a few more UML concepts, we introduce them to the basic modeling elements introduced here.

Because UML is so rich, there are many graphical elements in a UML diagram. It is important to be careful to use the correct drawing to describe something for instance; UML distinguishes between arrows with open and filled-in arrowheads, and solid and broken lines. As you become more familiar with the language, uses of the graphical primitives will become more natural to you.

We also won’t take a strict object-oriented approach. We may not always use objects for certain elements of a design—in some cases, such as when taking particular aspects of the implementation into account, it may make sense to use another design style. However, object-oriented design is widely applicable, and no designer can consider himself or herself design literate without understanding it.

By structural description, we mean the basic components of the system; we will learn how to describe how these components act in the next section. The principal component of an object-oriented design is, naturally enough, the object. An object includes a set of attributes that define its internal state.

When implemented in a programming language, these attributes usually become variables or constants held in a data structure. In some cases, we will add the type of the attribute after the attribute name for clarity, but we do not always have to specify a type for an attribute. An object describing a display (such as a CRT screen) is shown in UML notation in Figure 1.8 a).

The text in the folded-corner page icon is a note; it does not correspond to an object in the system and only serves as a comment. The attribute is, in this case, an array of pixels that holds the contents of the display. The object is identified in two ways: It has a unique name, and it is a member of a class. The name is underlined to show that this is a description of an object and not of a class.

A class is a form of type definition—all objects derived from the same class have the same characteristics, although their attributes may have different values. A class defines the attributes that an object may have. It also defines the operations that determine how the object interacts with the rest of the world. In a programming language, the operations would become pieces of code used to manipulate the object.

The UML description of the Display class is shown in Figure 1.8 b). The class has the name that we saw used in the d1 object since d1 is an instance of class Display.

The Display class defines the pixels attribute seen in the object; remember that when we instantiate the class an object, that object will have its own memory so that different objects of the same class have their own values for the attributes. Other classes can examine and modify class attributes; if we have to do something more complex than use the attribute directly, we define a behavior to perform that function.

A class defines both the interface for a particular type of object and that object’s implementation. When we use an object, we do not directly manipulate its attributes—we can only read or modify the object’s state through the operations that define the interface to the object.

As long as we do not change the behavior of the object seen at the interface, we can change the implementation as much as we want. This lets us improve the system by, for example, speeding up an operation or reducing the amount of memory required without requiring changes to anything else that uses the object. 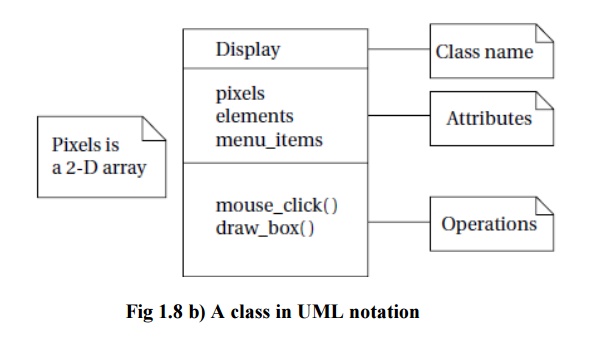 Clearly, the choice of an interface is a very important decision in object-oriented design. The proper interface must provide ways to access the object’s state (since we cannot directly see the attributes) as well as ways to update the state.

We need to make the object’s interface general enough so that we can make full use of its capabilities. However, excessive generality often makes the object large and slow. Big, complex interfaces also make the class definition difficult for designers to understand and use properly.

There are several types of relationships that can exist between objects and classes:

■Association occurs between objects that communicate with each other but have no ownership relationship between them.

■ Aggregation describes a complex object made of smaller objects.

■Composition is a type of aggregation in which the owner does not allow access to the component objects.

■ Generalization allows us to define one class in terms of another.

These state machines will not rely on the operation of a clock, as in hardware; rather, changes from one state to another are triggered by the occurrence of events. 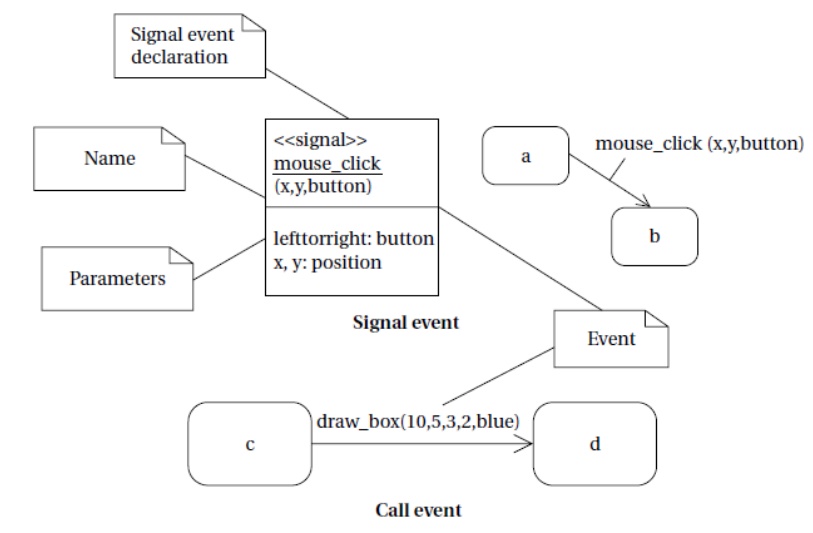 An event is some type of action. The event may originate outside the system, such as a user pressing a button. It may also originate inside, such as when one routine finishes its computation and passes the result on to another routine.We will concentrate on the following three types of events defined by UML, as illustrated in Figure 1.8 c):

A signal is an asynchronous occurrence. It is defined in UML by an object that is labeled as a <<signal>>. The object in the diagram serves as a declaration of the event’s existence. Because it is an object, a signal may have parameters that are passed to the signal’s receiver.

A call event follows the model of a procedure call in a programming language.

■A time-out event causes the machine to leave a state after a certain amount of time. The label tm(time-value) on the edge gives the amount of time after which the transition occurs. A time-out is generally implemented with an external timer. This notation simplifies the specification and allows us to defer implementation details about the time-out mechanism.