In order to learn how to use UML to model systems, we will specify a simple system, a model train controller, which is illustrated in Figure 1.2.The user sends messages to the train with a control box attached to the tracks.

In order to learn how to use UML to model systems, we will specify a simple system, a model train controller, which is illustrated in Figure 1.2.The user sends messages to the train with a control box attached to the tracks.

The train includes analog electronics to sense the bits being transmitted and a control system to set the train motor’s speed and direction based on those commands.

Each packet includes an address so that the console can control several trains on the same track; the packet also includes an error correction code (ECC) to guard against transmission errors. This is a one-way communication system the model train cannot send commands back to the user.

We start by analyzing the requirements for the train control system.We will base our system on a real standard developed for model trains.We then develop two specifications: a simple, high-level specification and then a more detailed specification.

Before we can create a system specification, we have to understand the requirements.

Here is a basic set of requirements for the system:

The console shall be able to control up to eight trains on a single track.

The speed of each train shall be controllable by a throttle to at least 63 different levels in each direction (forward and reverse).

There shall be an inertia control that shall allow the user to adjust the responsiveness of the train to commanded changes in speed. Higher inertia means that the train responds more slowly to a change in the throttle, simulating the inertia of a large train. The inertia control will provide at least eight different levels.

There shall be an emergency stop button.

An error detection scheme will be used to transmit messages. 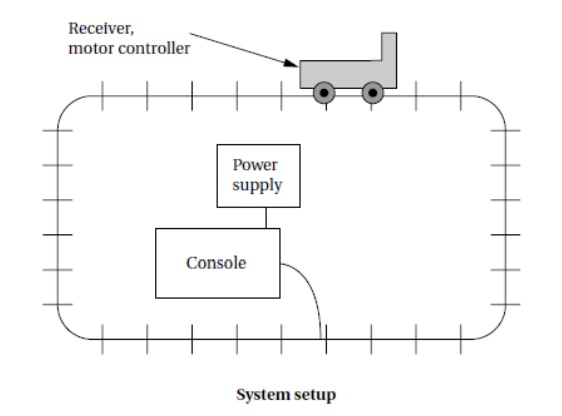 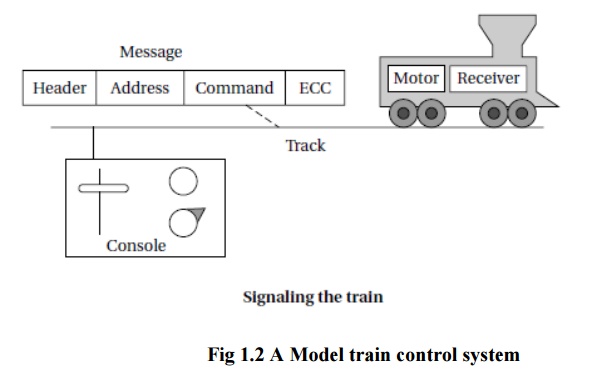 We can put the requirements into chart format:

We will develop our system using a widely used standard for model train control. We could develop our own train control system from scratch, but basing our system upon a standard has several advantages in this case: It reduces the amount of work we have to do and it allows us to use a wide variety of existing trains and other pieces of equipment.

The DCC standard is given in two documents:

Standard S-9.1, the DCC Electrical Standard, defines how bits are encoded on the rails for transmission.

Any DCC-conforming device must meet these specifications. DCC also provides several recommended practices. These are not strictly required but they provide some hints to manufacturers and users as to how to best use DCC.

The DCC standard does not specify many aspects of a DCC train system. It doesn’t define the control panel, the type of microprocessor used, the programming language to be used, or many other aspects of a real model train system.

The standard concentrates on those aspects of system design that are necessary for interoperability. Over standardization, or specifying elements that do not really need to be standardized, only makes the standard less attractive and harder to implement.

The Electrical Standard deals with voltages and currents on the track. While the electrical engineering aspects of this part of the specification are beyond the scope of the book, we will briefly discuss the data encoding here.

The standard must be carefully designed because the main function of the track is to carry power to the locomotives. The signal encoding system should not interfere with power transmission either to DCC or non-DCC locomotives. A key requirement is that the data signal should not change the DC value of the rails.

The data signal swings between two voltages around the power supply voltage. As shown in Figure 1.3, bits are encoded in the time between transitions, not by voltage levels. A 0 is at least 100 ms while a 1 is nominally 58ms.

The durations of the high (above nominal voltage) and low (below nominal voltage) parts of a bit are equal to keep the DC value constant. The specification also gives the allowable variations in bit times that a conforming DCC receiver must be able to tolerate.

The standard also describes other electrical properties of the system, such as allowable transition times for signals.

The DCC Communication Standard describes how bits are combined into packets and the meaning of some important packets.

Some packet types are left undefined in the standard but typical uses are given in Recommended Practices documents. We can write the basic packet format as a regular expression:

In this regular expression:

P is the preamble, which is a sequence of at least 10 1 bits. The command station should send at least 14 of these 1 bits, some of which may be corrupted during transmission.

s is the data byte start bit, which, like the packet start bit, is a 0.

D is the data byte, which includes eight bits. A data byte may contain an address, instruction, data, or error correction information.

A packet includes one or more data byte start bit/data byte combinations. Note that the address data byte is a specific type of data byte.

A baseline packet is the minimum packet that must be accepted by all DCC implementations. More complex packets are given in a Recommended Practice document.

A baseline packet has three data bytes: an address data byte that gives the intended receiver of the packet; the instruction data byte provides a basic instruction; and an error correction data byte is used to detect and correct transmission errors.

The instruction data byte carries several pieces of information. Bits 0–3 provide a 4-bit speed value. Bit 4 has an additional speed bit, which is interpreted as the least significant speed bit. Bit 5 gives direction, with 1 for forward and 0 for reverse. Bits 7–8 are set at 01 to indicate that this instruction provides speed and direction.

The standard says that the command unit should send packets frequently since a packet may be corrupted. Packets should be separated by at least 5 ms.

Digital Command Control specifies some important aspects of the system, particularly those that allow equipment to interoperate. But DCC deliberately does not specify everything about a model train control system. We need to round out our specification with details that complement the DCC spec.

A train control system turns commands into packets. A command comes from the command unit while a packet is transmitted over the rails.

Commands and packets may not be generated in a 1-to-1 ratio. In fact, the DCC standard says that command units should resend packets in case a packet is dropped during transmission.

We now need to model the train control system itself. There are clearly two major subsystems: the command unit and the train-board component as shown in Figure 1.4. Each of these subsystems has its own internal structure.

The basic relationship between them is illustrated in Figure 1.5. This figure shows a UML collaboration diagram; we could have used another type of figure, such as a class or object diagram, but we wanted to emphasize the transmit/receive relationship between these major subsystems. The command unit and receiver are each represented by objects; the command unit sends a sequence of packets to the train’s receiver, as illustrated by the arrow.

The notation on the arrow provides both the type of message sent and its sequence in a flow of messages; since the console sends all the messages, we have numbered the arrow’s messages as

1..n. Those messages are of course carried over the track.

Since the track is not a computer component and is purely passive, it does not appear in the diagram. However, it would be perfectly legitimate to model the track in the collaboration diagram, and in some situations it may be wise to model such nontraditional components in the specification diagrams. For example, if we are worried about what happens when the track breaks, modeling the tracks would help us identify failure modes and possible recovery mechanisms. 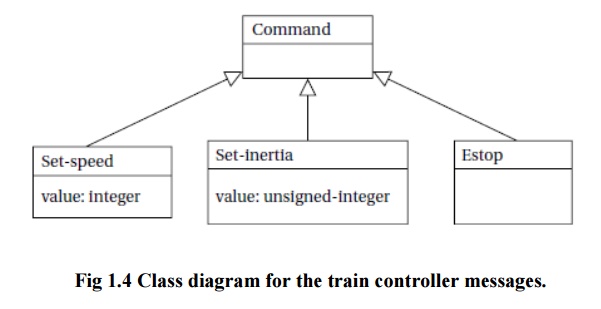 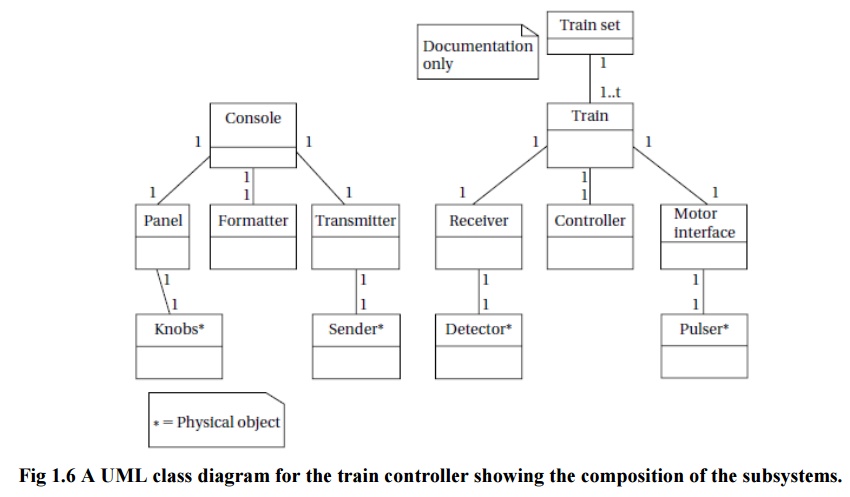 Let’s break down the command unit and receiver into their major components. The console needs to perform three functions: read the state of the front panel on the command unit, format messages, and transmit messages. The train receiver must also perform three major functions: receive the message, interpret the message (taking into account the current speed, inertia setting, etc.),and actually control the motor. In this case, let’s use a class diagram to represent the design; we could also use an object diagram if we wished. The UML class diagram is shown in Figure 1.6. It shows the console class using three classes, one for each of its major components. These classes must define some behaviors, but for the moment we will concentrate on the basic characteristics of these classes:

The Console class describes the command unit’s front panel, which contains the analog knobs and hardware to interface to the digital parts of the system.

The Formatter class includes behaviors that know how to read the panel knobs and creates a bit stream for the required message.

The Transmitter class interfaces to analog electronics to send the message along the track.

There will be one instance of the Console class and one instance of each of the component classes, as shown by the numeric values at each end of the relationship links. We have also shown some special classes that represent analog components, ending the name of each with an asterisk:

Knobs* describes the actual analog knobs, buttons, and levers on the control panel.

Sender* describes the analog electronics that send bits along the track.

Likewise, the Train makes use of three other classes that define its components:

The Receiver class knows how to turn the analog signals on the track into digital form.

The Controller class includes behaviors that interpret the commands and figures out how to control the motor.

The Motor interface class defines how to generate the analog signals required to control the motor. We define two classes to represent analog components:

Detector* detects analog signals on the track and converts them into digital form.

We have also defined a special class, Train set, to help us remember that the system can handle multiple trains. The values on the relationship edge show that one train set can have t trains. We would not actually implement the train set class, but it does serve as useful documentation of the existence of multiple receivers.