The invasion and multiplication of a parasite in or on the surface of host tissue constitute infection.

The invasion and multiplication of a parasite in or on the surface of host tissue constitute infection. Infection and immunity involve interaction between thebody (host) and the infecting microorganism. Based on their relationship to their host, microorganisms classified as saprophytes (free living microbes that subsist on dead or decaying organic matter, mostly found in soil). Parasites (establish themselves and multiply in hosts (it may be pathogens - disease producing) or commensals (without causing any damage to the host-normal flora). Infections may be classified in various ways.

Primary infection      :  First time infection with a parasite in a host.

Secondary infection :When new parasite sets up an infection in a host  whose  resistance  is  lowered  by  a  pre-existing infectious disease.

Cross infection         :  When a patient already suffering from a disease a new infection is set up from another host or another external source.

Latent infection       : Some parasites, following infection, may remain in the tissues in a latent or hidden form, multiply and  producing  clinical  disease  when  the  host resistance is lowered.

Sources of infection : Many pathogens are able to infect, which may be From

iii.                  From soil, water and contaminated food. This may enter the host by either, direct contact (contagious disease) or indirect (like clothing).

It may also occur by

·              Congenitally some pathogens (eg) rubella virus) are able to cross the placental barrier and infect the fetus in utero (Vertical transmission).

Infectious disease may be localized ( superficial or deep-seated) or generalized (spreading through tissue spaces and circulation). However, it can be Endemic (when a small number of cases occur constantly among the population of a community eg: Typhoid), Epidemic (The disease flares up and large number of cases develop with in a community with in a short time. eg: Influenza) or Pandemic( when an epidemic becomes very widespread areas in the world involving large number of people with in a short period).

Bacteria are unicellular prokaryotic organisms.Based on the structure and shape three major group of bacteria namely, Bacillus (cylindrical forms), Coccus (spherical forms) and Spiral. Humans and animals have abundant normal flora (microbes) that usually do not produce disease under normal healthy condition. The pathogenesis of bacterial infection includes initiation of the infectious process and mechanisms that lead to the development of signs and symptoms of disease. Many bacterial infections are considered pathogenic, though they are unapparent or asymptomatic. 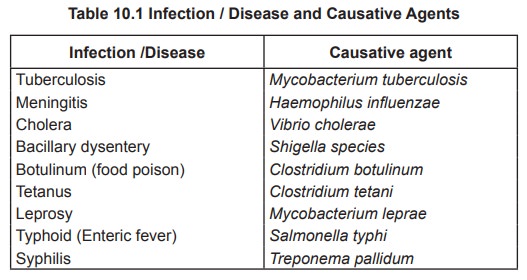 Virus are acellular obligate intracellular parasites. It contain only one type of nucleic acid, it may be either single or double stranded DNA or RNA. The extracellular infectious virus particle is called the virion. The virion consists of nucleic acid surrounded by a protein coat called capsid which protects the nucleic acid from deleterious environment and to introduce viral genome into the host cells by adsorbing readily to the cell surface.

viral diseases range from minor ailments such as the common cold to terrifying diseases such as Rabies and Acquired Immune Deficiency Syndrome (AIDS). They may be sporadic like Mumps, endemic like Infectious hepatitis, epidemic like Dengue fever or pandemic like Influenza. Depending on the clinical outcome, Viral infections can be classified as unapparent (sub clinical) or apparent (clinical or overt) infections. 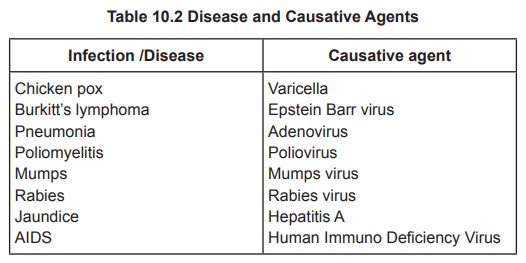 Fungi are eukaryotic protista, recognized as causative agents of human disease earlier than bacteria. Fungi possess rigid cell wall containing chitin, mannose and other polysaccharides. They divide asexually, sexually or by both processes. They may be unicellular or multicellular. Depending on the cell morphology fungi can be divided into four classes –

Yeasts  :Unicellular fungi which occur as spherical and  reproduce by simple budding

Moulds      :   True mycelia and they are reproduced by the formation of different types of spores.

Dimorphic fungi : Occur as filaments (soil) or as yeasts (host tissues) depending on the conditions of growth. 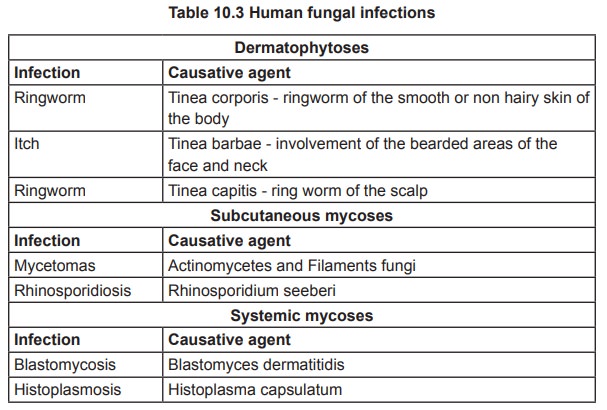