T cells are responsible for cell-mediated immunity. T cells are initially formed in the bone marrow and get its maturation and differentiation in the thymusgland. After maturation T cells migrate to secondary lymphoid organ. T cells areclassified according to their functions and cell-surface marker called CDs (clusters ofdifferentiation). They are functionally classified as T helper, T suppressor, T memoryand T killer cells. T cells are associated with certain types of allergic reactions called Delayed hypersensitivity and also in transplanted organ rejection.

The Major Histocompatibility Complex (MHC) are unique to each individual and indicate self-molecules and always these molecules are given as reference when ever an antigen is presented and this helps the immune system to differentiate the self from non-self. (fig. 3) Helper T (TH) cells (also known as CD4 cells) activate B cells to produce antibodies against T-dependent antigens (usually protein in composition). TH cells recognize and bind to an antigen in association with an MHC II (Fig. 3) on the surface of an antigen presenting cells (APC) and the APC cell secrete the cytokineIL-1 and induce the THcell to secrete the cytokine IL-2. Only THcells that have been stimulated by an antigen have receptors for IL-2 and thus these THcells are specificfor only that stimulatory antigen. Production of IL-2 and other cytokines by these TH cells stimulates the cell-mediated (e.g., TC cells) and humoral (B cells- Plasma cell) immune responses. In Acquired Immuno Deficiency Syndrome (AIDS),the Human Immuno deficiency virus (HIV) affect the T helper cells. Suppressor (TS) cells appear to regulate the immune response once the antibody formation reached the adequate levels. Cytotoxic T cells (CD8) identify the viral infected cells and inject the molecule called Perforin to lyse the viral infected cells. Some of the activated T cells become Tmemory cells. 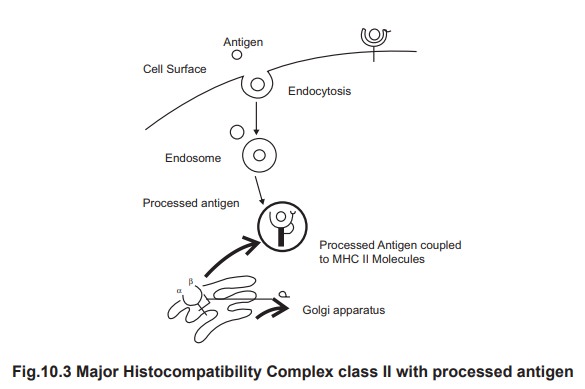 Lymphokines are the cytokines secreted by the lymphocytes and these are small molecules released due to a stimulus and help to send the signal between cells. The term interleukin (IL) is also often referring to the cytokine produced by leukocytes. There is considerable overlap between the actions of the individual lymphokines, so that many of the above effects are shared between TNFa, IL-2 to IL-12. In addition, these proinflammatory cytokines activate the immune system, mobilizing neutrophils from bone marrow, causing dendritic cells to migrate to lymph nodes, and also initiating changes in adipocyte and muscle metabolism and also responsible for inducing fever.