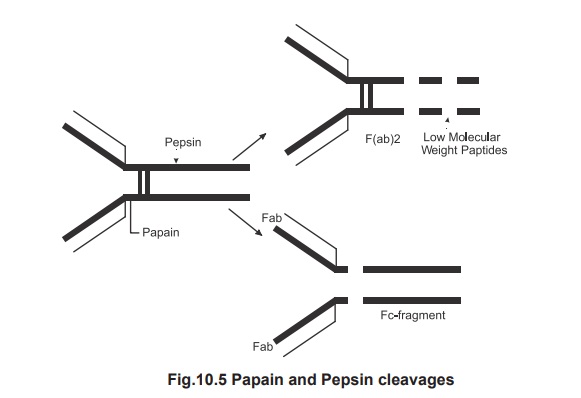 Antibodies found in the serum and other body fluids of vertebrates that react specifically with the Ag.

Antibodies found in the serum and other body fluids of vertebrates that react specifically with the Ag. Antibody belongs to a family of globular protein called Immunoglobulin. Antibody are Gamma globulins, in normal immune response antibodies are heterogeneous. It provides defense against extra cellular antigen.

2.           Recruit other cells and molecule to destroy the pathogen (effectors function or Biological activity) 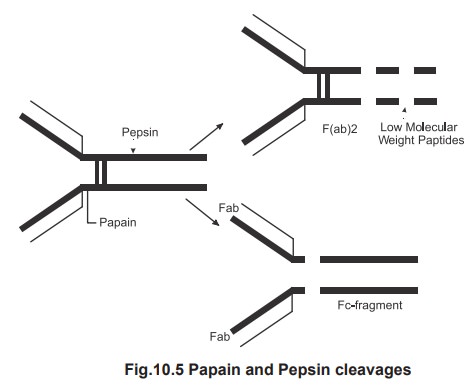 To understand the function of various ends in the antibody molecule the more abundant IgG molecule when subjected to papain and pepsin cleavages, as shown (Fig.10.5), the papain cleavage yields 2 monovalent Fab molecule which combine with the antigen (Fragment antigen binding) and one Fc part which can be the fragment crystalisable. When the same IgG molecule subjected to pepsin cleavage it resulted with a divalent antigen binding Fab part and fragments of Fc portion. This is because the papain cleaves between the heavy chain and the hinge region .The pepsin cleaves after the disulfide bridge. This enzymatic digestion also indicates that the two disulfide bond hold the chains together. However the Fc portion is essential for biological activity. Fc region can attach to a host cell or complement or helps to cross the placenta. 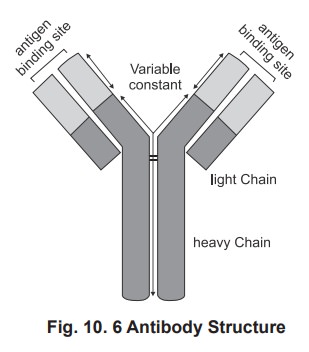 A single antibody unit is ‘Y’ shaped molecule which is chemically a glycoprotein forms the gamma globulin in plasma (Fig. 10.6). Most antibody monomers consist of four polypeptide chains. Two are heavy chains and two are light chains. There is a constant region, which is specific for a particular classof antibodies. For IgM the heavy chain is m, for IgG it is g, for IgA is a, for IgD it is d, and for IgE it is e. The light chain may either be k (or) l (kappa or lamda). The chains are folded into discrete regions called domains. There are 2 domain in the light chain and 4 to 5 domain in the heavy chains. In the constant region the free end forms the FC portion. There is a variable region present in the heavy and light chain and called as variable (V) region, where antigen binding occurs. Hence in a given antibody molecule two binding sites are available.

An antibody or immunoglobulin (Ig) is glycoprotein produced by B cells, which is capable of combining specifically with the antigen, which induces it. Antibodies are divided into five major classes, IgM, IgG, IgA, IgD and IgE, based on their heavy chain constant region structure. An antibody has at least two identical antigen-bindingsites and it is the valence of an antibody.

3. Immunoglobulin and their functions

IgG has two light chains either kappa or lambda and two heavy chain ofgtypeand consists of four subclasses IgG1, IgG2, IgG3 and IgG4. It is predominant class of immunoglobulin and account for approximately 80% in human serum. IgG produced particularly during the secondary immune response. IgG stimulates phagocytic cells, activates the complement system, binds neutrophils, and can neutralize toxins. Most importantly, it is the only antibody that can cross the placenta and confer immunity on the foetus.

IgA has two light chains either kappa or lambda and two heavy chain ofatypeand consist of two subclasses IgA1 and IgA2, constitutes only 13% of the antibody in human serum, but predominant class of antibody in extravascular secretions. The IgA present in secretions (tears, saliva, nasal secretions and mammary gland secretions) is secretory IgA. It is found to produce immunity against tapeworms and present in the colostrums protects the baby from intestinal pathogens.

IgM has two light chains either kappa or lambda and two heavy chain ofmtypeconstitutes 8% of the antibody in human serum, it is the largest of the immunoglobulins often referred as the macroglobulin because it has more than five binding sites for antigen. It is the first antibody to appear in the primary immune response therefore an useful indicator of recent infection. Most of the natural antibodies like ABO blood grouping (anti-A anti-B) are of the IgM class and important in the initial activation of B-cells, macrophages, and activate the complement system.

IgD has two light chains either kappa or lambda and two heavy chain ofdtypeconstitute less than 1% of the antibody in human serum. Plays a role in activating and suppressing lymphocyte activity and found large quantities in the cell walls of many B-cells. IgD has a single binding site.

IgE is a reaginic antibody, has two light chains either kappa or lambda andtwo heavy chain of e type constitute less than 0.003% of the antibody in human serum. Mediator in allergic responses. Most importantly activates histamine secreting cells. Also appears to play a role in parasitic infection and mediates type one hypersensitivity.