When a bacterial cell synthesizes a recombinant protein, it may end up in the cytoplasm, the periplasmic space between the inner and outer membranes, or be exported out of the cell into the culture medium.

When a bacterial cell synthesizes a recombinant protein, it may end up in the cytoplasm, the periplasmic space between the inner and outer membranes, or be exported out of the cell into the culture medium. Secretion across the inner, cytoplasmic, membrane is directed by the presence of a hydrophobic signal sequence at the N-terminal end of the newly synthesized protein. The signal sequence is cut off after export by signal peptidase (also known as leader peptidase). Although bacteria such as E. coli export few proteins, special secretion systems do exist that allow export of proteins across both membranes into the culture medium.

It is obviously easier to purify a secreted protein than one that remains in the cytoplasm with the majority of the bacterial cell’s own proteins. On the other hand, many proteins are unstable when outside the cellular environment and/or exposed to air. Generally, such proteins are not used in biotechnology since they are awkward to purify or to use. Most proteins and enzymes chosen for practical use are relatively stable outside the cell. A standard goal is to arrange for them to be secreted in order to help isolation and purification. Several approaches exist for this:

(a)   A signal sequence is engineered into the cloned gene. Consequently, the recombinant protein will have an N-terminal signal sequence when newly synthesized. This will direct its export to the periplasm by the general secretory system. The bacterial cells are then harvested and treated so as to permeabilize or remove the outer membrane, thus releasing the recombinant protein.

One major problem is that large amounts of a recombinant protein may overload the secretory machinery and aggregate into inclusion bodies. Substantial amounts of the recombinant protein may accumulate inside the cell with the signal sequence still attached. Secretion may sometimes be increased dramatically by providing elevated levels of the secretory system proteins (Sec proteins). Extra copies of the sec genes can be cloned and expressed on plasmids to increase the protein amounts. Mutant E. coli strains also have been developed that facilitate secretion.

(c)   The gene of interest can be expressed in gram-positive bacteria, such as Bacillus, which lack an outer membrane. Consequently, exported proteins go out into the culture medium. Although this is convenient, the genetics of Bacillus is still far behind that of E. coli. Animal cells are another alternative as they have only a single cytoplasmic membrane, and therefore secrete proteins directly into the medium.

(d)    Secretion across both membranes of gram-negative bacteria such as E. coli may be achieved by specialized export systems (Fig. 10.7). Most of these export systems are used naturally for the secretion of toxins by pathogenic strains of bacteria. Thus the type I secretory system spans both inner and outer membranes and is used to secrete hemolysin by some E. coli strains that cause urinary infections. The type II secretory system spans the outer membrane only. Export into the medium therefore requires the general secretory system (i.e., the Sec system) to export the protein across the inner membrane first. Normally, this two-step process is used by Pseudomonas to secrete exotoxin A. 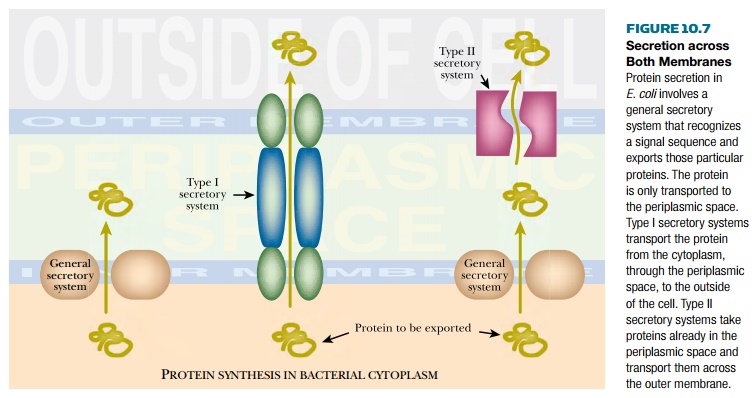