Expression of Proteins by Yeast

Yeast can be grown easily on both a small scale or in large bioreactors.

EXPRESSION OF PROTEINS BY YEAST

As already discussed, brewer’s yeast, Saccharomyces cerevisiae, has been used as a model single- celled eukaryote in molecular biology. The yeast genome has been sequenced and many genes have been characterized. From the viewpoint of biotechnology, several other factors favor the use of yeast for production of recombinant proteins:

(a)   Yeast can be grown easily on both a small scale or in large bioreactors.

(b)  After many years of use in brewing and baking, yeast is accepted as a safe organism. It can therefore be used to produce pharmaceuticals for use in humans without needing extra government approval.

(c)   Yeast normally secretes very few proteins. Consequently, if it is engineered to release a recombinant protein into the culture medium, this can be purified relatively easily.

(d)  DNA may be transformed into yeast cells either after degrading the cell wall chemically or enzymatically, or, more usually, by electroporation.

(e)   A naturally occurring plasmid, the 2-micron circle, is available as a starting point for developing cloning plasmids.

(f)    A variety of yeast promoters have been characterized that are suitable for driving expression of cloned genes.

(g)  Although only a primitive single-celled organism, yeast nonetheless carries out many of the posttranslational modifications typical of eukaryotic cells, such as addition of sugar residues (glycosylation). However, yeast only glycosylates proteins that are secreted.

Recombinant proteins may be engineered for secretion by yeast (Fig. 10.9). Adding a signal peptide upstream of the coding region flags the protein for secretion. The signal sequence used is taken from the gene for mating factor α, a protein that is normally secreted. Yeast signal peptidase recognizes the sequence Lys-Arg and cleaves off the signal peptide once the protein has crossed the cell membrane. It is therefore necessary to position the two codons for Lys-Arg immediately upstream of the coding sequence for the recombinant protein to ensure that the engineered protein has a correct N-terminal sequence. 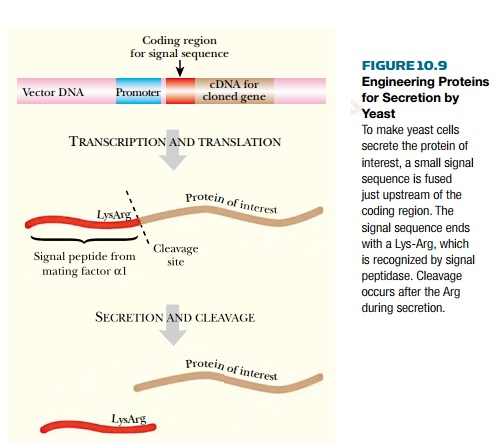 A variety of vectors exist for use with yeast. These may be classified into three main classes:

(a)   Plasmid vectors are used most often. These are typically yeast shuttle vectors that can replicate in E. coli as well as yeast. The yeast replication system is normally derived from the yeast 2-micron circle.

(b)  Vectors that integrate into the yeast chromosomes. Because plasmids may be lost, especially in large-scale cultures, this approach has the advantage of stability. The disadvantage is that only a single copy of the cloned gene is present, unless tandem repeats are used. These, however, are unstable because of crossing over. In practice this approach is rarely used.

(c)   Yeast artificial chromosomes. These are used for cloning and analysis of large regions of eukaryotic genomes. However, they are not convenient for use as expression vectors.

Although many recombinant proteins have been expressed successfully in yeast, yields are often low. The problems include:

(a)   Loss of expression plasmids during growth in large bioreactors.

(b)  Proteins supposed to be secreted are often retained in the space between membrane and wall rather than exiting into the culture medium.

(c)   Glycosylation of proteins is often excessive and the final protein may have too many sugar residues attached to function correctly.