Expression of Proteins by Insect Cells

Mammalian cells are relatively delicate and have complex nutritional requirements. This makes them both difficult and expensive to grow in culture compared to bacteria or yeasts.

EXPRESSION OF PROTEINS BY INSECT CELLS

Mammalian cells are relatively delicate and have complex nutritional requirements. This makes them both difficult and expensive to grow in culture compared to bacteria or yeasts. However, cultured insect cells are relatively robust and can be grown in simpler media than mammalian cells. Consequently, insect-based expression systems have been developed. These have the additional advantage of providing posttranslational modifications that are very similar to those found in mammalian cells.

The vectors used in cultured insect cells are almost all derived from a family of viruses, the baculoviruses, which infect only insects (and related invertebrates such as arachnids and crustaceans). Baculoviruses are unusual in forming packages of virus particles, known as polyhedrons. Some infected cells release single virus particles that can infect neighboring cells within the same insect. But when the host insect is dead or dying, packages of virus particles embedded in a protein matrix are released instead. The matrix protein is known as polyhedrin, and the polyhedron structure protects the virus particles while they are outside the host organism in the environment. When swallowed by another insect, the polyhedrin is dissolved by digestion and the polyhedron falls apart. This releases individual virus particles that can infect the cells of the new host insect.

There are many different types of baculoviruses, and the one most often used is multiple nuclear polyhedrosis virus (MNPV). This infects many insects and replicates well in many cultured insect cell lines. A popular cell line used to propagate this baculovirus is from the fall armyworm (Spodoptera frugiperda). Yields of polyhedrin— and therefore of a recombinant protein using the polyhedrin promoter—are especially high in this cell line. 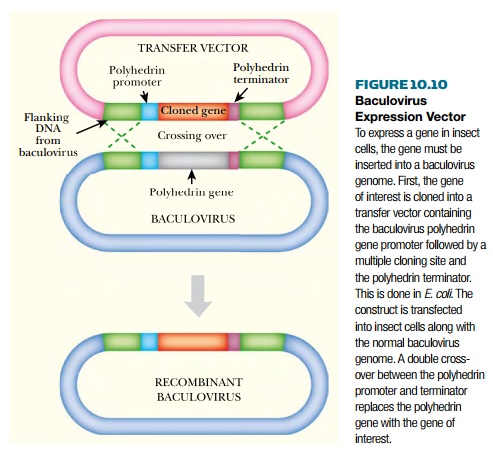 Because the expression vector is a virus, construction is carried out in two stages (Fig. 10.10). In the first stage, a “transfer” vector is used to carry the cDNA version of the cloned gene. The transfer vector is an E. coli plasmid that carries a segment of MNPV DNA, which initially included the polyhedrin gene and flanking sequences. The polyhedrin coding sequence was then replaced with a multiple cloning site. When the cloned gene is inserted, it is under control of the polyhedrin promoter. Construction up to this point is done in E. coli. In the second stage, the segment containing the cloned gene is recombined onto the baculovirus, thus replacing the polyhedrin gene. To achieve this, insect cells are transfected with both the transfer vector and with MNPV virus DNA. A double-crossover event generates the required recombinant baculovirus. 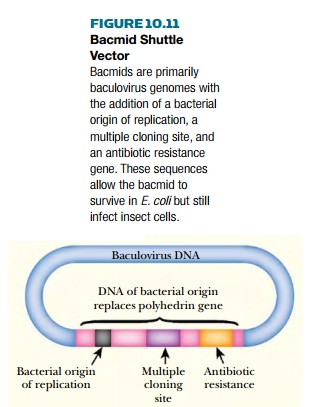 Because this procedure sometimes gives undesirable results, other insect vectors have been constructed. One possibility is a shuttle vector that replicates as a plasmid in E. coli and as a virus in insect cells. Such baculovirus-plasmid hybrids are referred to as bacmids (Fig. 10.11). They consist of an almost entire baculovirus genome into which a segment of DNA from an E. coli plasmid has been inserted. This region carries a bacterial origin of replication, a selective marker, and a multiple cloning site. The inserted segment replaces the polyhedrin gene of the baculovirus. The cloned gene is inserted into the MCS giving a recombinant bacmid. Bacmid DNA is then purified from E. coli and transfected into insect cells, where it replicates as a virus.

The recombinant baculovirus may then be used to infect cultured insect cells and the desired protein is produced over several days. Several hundred eukaryotic proteins have been successfully made