Expression of Eukaryotic Proteins in Bacteria

EXPRESSION OF EUKARYOTIC PROTEINS IN BACTERIA

In Previews pages, Recombinant DNA Technology, we discussed the basics of cloning genes onto a variety of vectors. Successful expression of cloned genes depends on several factors. Obviously, bacterial genes will usually be expressed when carried on cloning vectors in bacterial host cells, provided that they are next to a suitable bacterial promoter. Special plasmids known as expression vectors are often used to enhance gene expression. As noted in Previews Pages, these provide a strong promoter to drive expression of the cloned gene. Expression vectors also contain genes for antibiotic resistanace to allow selection of the vector and therefore the recombinant protein. In addition, they must have an origin of replication appropriate to the host. 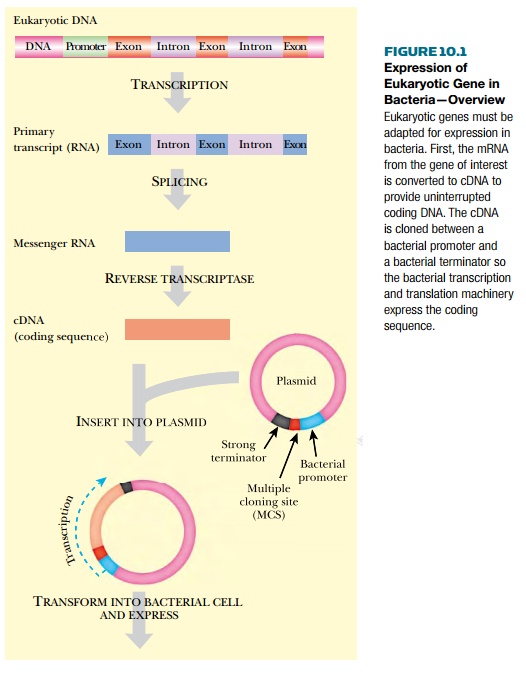 Even if a cloned gene is transcribed at a high level, production of the encoded protein may be limited at the stage of protein synthesis. Different mRNA molecules are translated with differing efficiencies. Several factors are involved:

(a)  Strength of the ribosome binding site–ribosome interaction

(b)  mRNA stability and/or secondary structure

In addition to standard expression vectors, more sophisticated vectors exist to optimize these other aspects of protein production. In this chapter we will discuss the use of translation vectors and fusion vectors to increase the synthesis of a recombinant protein from a cloned gene.