Spanish discovery of the New World led to the conquest of Mexico and South America. The voyage of Columbus was followed by further explorations by Spanish Conquistadors (Conquerors) who defeated the natives and colonized it. They brutally killed the natives in their conquest and the remaining were employed under harsh conditions in gold and silver mines, and in plantations. The Spanish genocide of the natives included massacre, slavery and destruction of culture. Many natives also died because of epidemic diseases brought by the colonizers.

One of the most important outcomes of the conquest of Americas by the European colonial powers was the movement of plants, animals, technology, culture and strange diseases between the Americas and Europe or between the New World and the Old World. This is known as Columbian Exchange.

Plants such as maize, potatoes, sweet potatoes, tomatoes, pineapple, beans and cocoa, and animals such as turkey and guinea pigs, were transported from America and introduced in Europe. And from Europe went sugarcane, wheat, rice, horses, cattle, sheep and goats to America. Europe also exported deadly diseases such as small pox, measles, chicken pox, malaria, typhus, etc. Apart from guns and horses, the most dangerous weapons the natives had to encounter were these deadly diseases against which they were defenceless. It led to the near annihilation of the natives in most parts of the Americas.

The introduction of sugarcane led to the establishment of sugarcane plantations in the Caribbean islands and South America. These plantations initially employed natives. The mass extinction of the native population led to the import of slaves from Africa. Gambia, Senegal, Goree, El Mina and Congo became important centres of slave trade in Africa. The Trans-Atlantic Trade was a triangular trade. The European countries purchased slaves from Africa who were transported to America. In return they got sugar and other raw materials from America. The European countries profited immensely from this trade. 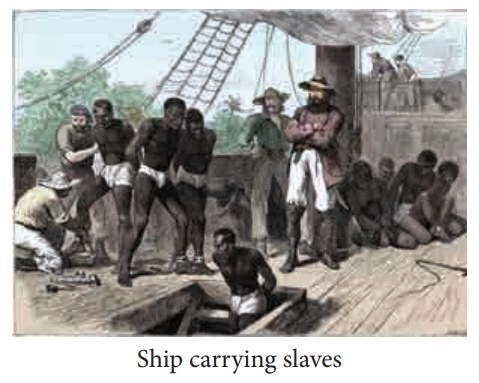 Geographical discoveries led to Commercial Revolution. The chief features of commercial revolution were the emergence of banking, joint-stock companies and growth of trade.

The economic system followed during this period has been described as mercantilism. It is a system regulated by the State. It is a system in which commercial profit was aimed at by monopoly trade.

The Portuguese, after discovering a new sea route to India, enforced its monopoly on the spice trade of East Indies, eliminating competition of the Arabs, Egyptians and Venetians by use of military force. The Spaniards established monopoly over the mining and transportation of gold and silver in its colonies in the New World.

The English East India Company had monopoly trade in India and amassed huge wealth. Thus, the chief feature of mercantilism was exploitation of the resources of the colonies for the benefit of the colonisers. It represented an important stage in the development of modern capitalism.