Henry the Navigator of Portugal laid the foundation for long distance sea voyages. He established a navigation school to train sailors. In his school, he taught them how to use navigational instruments such as the mariner’s compass and the astrolabe.

Henry the Navigator of Portugal laid the foundation for long distance sea voyages. He established a navigation school to train sailors. In his school, he taught them how to use navigational instruments such as the mariner’s compass and the astrolabe.

The impulse for seafaring and adventurous spirit to explore uncharted sea waters was kindled by the curiosity generated by the Renaissance and the travel accounts of Marco Polo and Ibn Battuta. This was further fuelled by the crusading spirit of the Missionaries who dared to undertake dangerous voyages to spread the gospel to the non-believers in distant lands.

But the primary factor was economic. When the Ottoman Turks blocked the land route between the East and the West, spices and other goods became costlier. The European traders were deprived of the huge profits they were earning out of their trade in spices. This intensified the urge to discover a new sea route to Asia. The monarchs supported sea voyages in the hope that resources from trade would free them from their dependence on nobles.

A  breakthrough  was  made  in the fourteenth  century  when  a  copy of Ptolemy’s Geography was brought from the Byzantine Empire to the West. By the middle of the fourteenth century, thanks to the printing press, multiple copies Henry the Navigator were made and circulated widely. It greatly increased the knowledge of the sea routes. 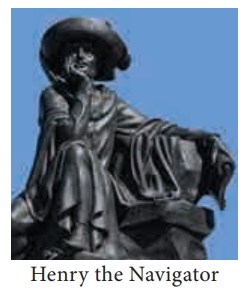 The sailors of Prince Henry had travelled into Atlantic upto the islands of Azores and Madeira. They explored the west coast of Africa. Lopo Gonzalves was the first sailor to cross the equator. Till then sailors did not dare to venture beyond, as they harboured fears about boiling waters and sea monsters. Bartholomew Diaz ventured further down the African coast reaching cape point or the southern tip of Africa in 1487 A.D. (C.E.). He named it the Cape of Storms as he encountered fierce storms there. However, King John of Portugal renamed it as Cape of Good Hope as it provided hope to reach India by sea.

The Portuguese established trading posts along the west coast of Africa dealing in lumber, ivory and slaves. The establishment of trading posts enabled them to buy slaves and transport them directly to Portugal. The slaves were employed in the sugarcane plantations, and sugar was exported to Europe. Slaves were purchased from the African slave market and transported to the colonies under inhuman conditions in slave ships. They were chained and cramped into narrow spaces with insufficient air to breathe. Many died during the journey. For those who survived, the suffering continued in the plantations. Slave trade increased with the discovery and colonization of America.

(c) Spain and Discovery of the New World

In 1492 A.D. (C.E.), Columbus, with the support of King Ferdinand and Queen Isabella of Spain, set sail in three ships. He crossed the Atlantic Ocean and reached the Bahamas Island, Cuba and Haiti. Columbus thought he had reached the frontier areas of Asia. Hence, he called the natives he encountered as Indians. Amerigo Vespucci, another sailor, made three or four voyages and landed on the American mainland. 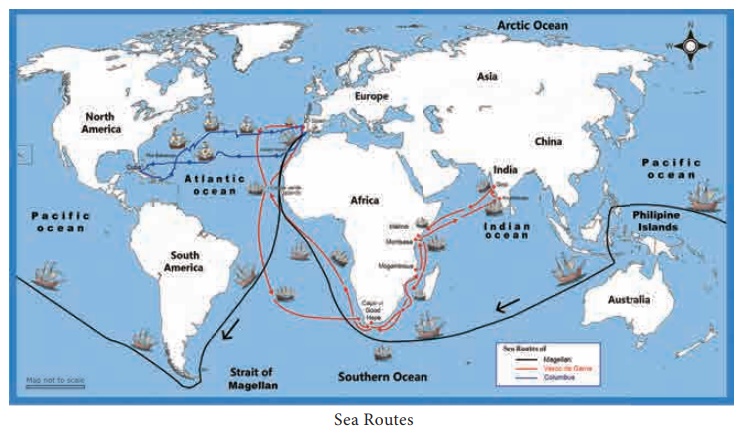 He realized that it was not Asia and that they had stumbled upon a new continent. Hence, he called it the New World. Later, a German cartographer, while preparing a map of the world, named the new world after Amerigo Vespucci and called it America.

The Portuguese claimed the territories discovered by Columbus. The dispute was referred to the Pope Alexander VI who drew an imaginary line north to south west of Azores and declared that the territories to the west of that line belonged to Spain and that of the east to the Portuguese.

In 1497 A.D. (C.E.) Vasco da Gama sailed from Portugal as the head of four ships to find a sea route to India by going around Africa. After reaching the Cape of Good Hope, he set sail to India with the help of an Arab navigator. On 20th May 1498 A.D. (C.E.) he reached Calicut on the Malabar Coast. At Calicut Vasco da Gama was astounded to find pepper and other spices, a precious commodity in Portugal, available at low prices. He bought as much spices as possible. Back home he earned huge profits. Later the Portuguese navy defeated the Zamorin of Calicut and captured Goa and made it its headquarters for all its possessions in the East. Thus the foundation of the Portuguese Empire in the East was laid. 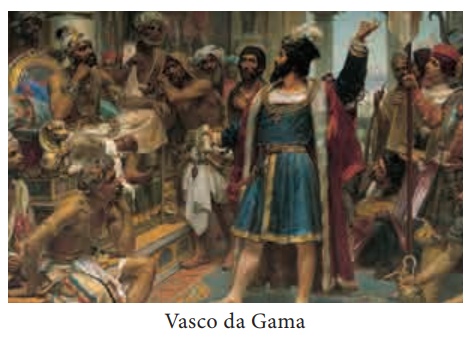 In 1519 A.D. (C.E.), Ferdinand Magellan sailed westward and crossed the Straits, which later came to be known as Magellan Straits. As the sea was calm he called it the Pacific Ocean. On reaching an island he named it as Philippines after the  Spanish Prince Philip. He was killed in a war with the locals. However, the ship in which he had travelled returned to Spain. Thus the first circumnavigation of the world had taken place.