The Italian city-states were centres of cultural activities since the fourteenth century. With the coming of the scholars and artists from Constantinople there was a surge of enthusiasm and interest in studying classical literature and art of Greeks and Romans in the Italian city states.

The Italian city-states were centres of cultural activities since the fourteenth century. With the coming of the scholars and artists from Constantinople there was a surge of enthusiasm and interest in studying classical literature and art of Greeks and Romans in the Italian city states. This creative upsurge was reflected in their writings, art, architecture and music. This cultural florescence is known as the renaissance. The origin of the word renaissance is from the Italian word renascita meaning rebirth. It is called renaissance because there was a rebirth or revival of classical Greek and Latin literature. Many scholars in Italy went in search of manuscripts of classical literature. Greek scholar Manuel Chrysoloras who taught Greek classics in Italy, Guarino and Giovanni Aurispa, to name just a few, visited Constantinople several times to collect Greek manuscripts. Later they printed what they collected. This provided stimulus to the flowering of renaissance.

(a) Why Italy became the birth place of Renaissance?

Italian city-states such as Florence, Milan, Venice, and Rome profited immensely from the Mediterranean trade. This led to the emergence of a rich and vibrant urban culture. The rich families of these city states such as Medicis of Florence patronized literature, art and music. The highpoint of this period was between 1475 A.D. (C.E.) and 1525 A.D. (C.E.). Italian universities taught humanities viz., language, grammar, rhetoric, history and ethics, which prepared the students for public life, commerce and administration. The study of humanities was so popular in the Italian Universities that students from all over Europe flocked there. Classical Greek and Latin literature introduced the idea of Humanism which got reflected in the paintings, sculptures, architecture, music and writings of that period.

(b)  Humanism in Literature

The idea of humanism was first expressed in literature. The humanists were critical of medieval ideas and institutions and criticized them satirically in their writings. They argued that man was endowed with reason and the ability to attain true knowledge and greatness. Petrarch (1304-1374 A.D. (C.E.)) was the first to adopt ideas of classical humanism in his works and is therefore called the Father of Humanism. Even before him, Dante, influenced by the classics, wrote Divine Comedy. Machiavelli wrote a political treatise called The Prince. In this book, he wrote about the virtues that a ruler should possess. He declared that a ruler should be Lion and Fox in one. For him, the end was more important than means. Erasmus (1466-1536 A.D. (C.E.)), known as the Prince among Humanists, wrote In Praise of Folly, a satirical work on the activities and rituals of the Church. Sir Thomas More of England wrote Utopia, a satire on the political evils of his time. Cervantes of Spain wrote Don Quixote, another satire on medieval chivalry and valour.

In the field of art, great artists like Leonardo da Vinci, Michelangelo and Raphael dominated the scene and produced some of the finest artistic works. Leonardo da Vinci (1452-1519 A.D. (C.E.)) was a versatile genius. He was a painter, sculptor, architect, military engineer, anatomist, and poet. His paintings of Mona Lisa (La Giaconda), The Last Supper and The Virgin on the Rocks are illustrious examples of his talent.

Michelangelo (1475-1564 A.D. (C.E.)) was a painter, sculptor, architect and poet. His marble sculpture of David depicts the youthful strength and energy of the giant slayer. He is also famous for his paintings in the ceilings of the Sistine Chapel in Rome. Raphael (1483-1520 A.D. (C.E.)) painted beautiful Madonnas (Virgin and the Child). His painting of the School of Athens reveals the ideological debate of his times, namely, the conflict between spiritualism and humanism. 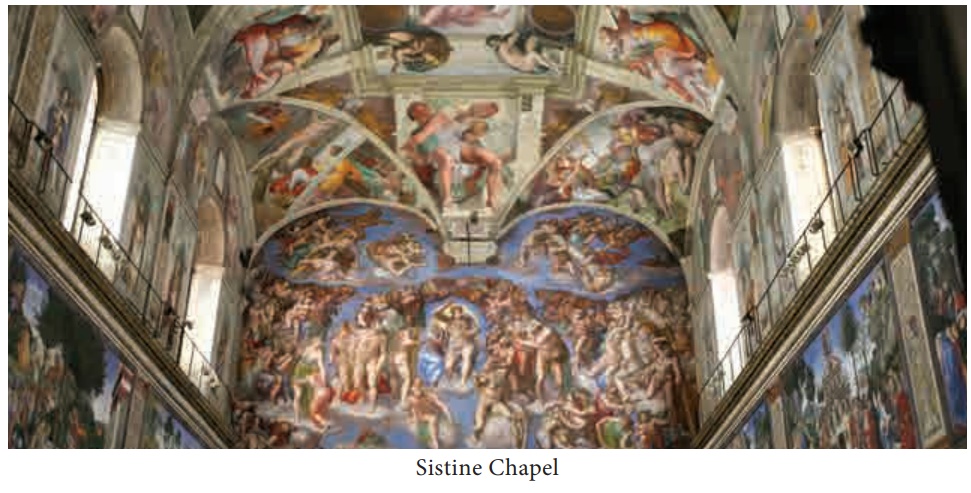 The advances in science were inspired by Ptolemy, Archimedes, Euclid and others of the classical period. In the medieval period the Aristotelian view that earth was the centre of the universe strengthened the Church’s view of creation and its own centrality to mankind. However, the influence of Plato and other classics challenged it, laying the foundations of modern science. William Harvey discovered the circulation of blood. Copernicus proved that earth revolved around the sun through a mathematical model. Galileo provided further astronomical proof with the aid of the telescope he invented. However, he was forced by the Inquisition to withdraw his findings on the threat of death penalty. The Church thus continued to prevent the growth of science as it undermined its importance. Nevertheless, scientific discoveries and inventions continued apace leading to the Scientific Revolution.

The impact of renaissance was profound and far-reaching. Its most important contribution was the idea of humanism. It marked a definite shift towards individualism, secularism and nationalism.

The introduction and practice of writing in the vernacular, starting from Dante, enriched the growth of vernacular languages which in turn provided the intellectual basis for the rise of nation-states.

Renaissance made a beginning in criticizing the corrupt and worldly practices of the Church. Erasmus and Thomas More indirectly encouraged the reformation movement.

The curiosity kindled by the renaissance played a decisive role in the discovery of new land routes and remapping of the world. The spirit of adventurism and quest for knowledge impelled the mariners to sail into the high seas.

Similarly, inquisitiveness and empiricism of renaissance combined with knowledge of the classical science led to new inventions in science – Copernican revolution in astronomy and William Harvey’s contribution to human anatomy.