(a) Growth of Trade and Rise of Towns

With the decline of Feudalism, Europe was gradually moving towards urbanisation. This process started first in Italy because of its prosperous Mediterranean trade. The Arabs brought spices from the east and then transported them by land to the ports of the Mediterranean region. Italian city-states such as Venice and Genoa profited immensely from this trade. Following the expansion of trade, a strong network of banking and financial institutions too developed in Italy. In this context, new ideas leading to the Renaissance, Reformation and Exploration through sea voyages were born.

(b) Invention of the Printing Press

The invention of the printing press accelerated the process of modernisation. Earlier, manuscripts were written by hand on animal skin called vellum. Only the privileged few could access them. Johannes Gutenberg (1394-1468 A.D. (C.E.)) invented the printing press in Germany in the middle of the fifteenth century. 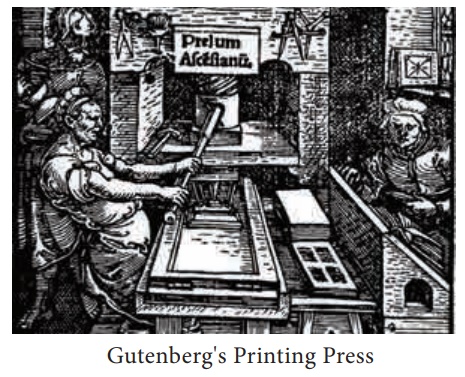 In 1453 A.D. (C.E.), Constantinople, the capital of the Byzantine Empire, was captured by the Ottoman Turks. This acted as a catalyst for the birth of Renaissance. It also led to the discovery of new land routes. Following the Turkish occupation, a number of scholars, artists and artisans left Constantinople, which was for many centuries the cultural capital of the Western world, to the Italian city states. Their presence and encouragement promoted the study of classical literature and art of Greeks and Romans. Similarly, though the exploration of the oceans had begun earlier, the European states were constrained to find an alternative route immediately because the Ottoman Turks were controlling the route.