The Roman Catholic Church was a powerful institution during the Middle Ages. The Church enjoyed both spiritual and temporal powers (apart from religious control it also exercised political control in certain areas such as the Papal States).

The Roman Catholic Church was a powerful institution during the Middle Ages. The Church enjoyed both spiritual and temporal powers (apart from religious control it also exercised political control in certain areas such as the Papal States). The Pope was its head. His office was known as Papacy. The Pope wielded spiritual authority over the Christians of Europe cutting across the territorial boundaries. He lived a luxurious life like a prince. Many of his officials were corrupt and the offices of the Church were sold for a price. The Church made the people believe that they would suffer in purgatory because of their sins. The people were further told that if they repented their sins and did penance, they would be absolved from sins and go to heaven. Otherwise they would suffer in hell. The Church prescribed a number of penances for various sins. People were made to believe that participation in the Mass (a ceremony in Christianity) would reduce the sins. The Church even began to grant pardon known as the indulgences, for a fee.

The critical thinking and inquisitive spirit of Renaissance humanism helped people question such practices of the Church. Humanists such as Erasmus and Sir Thomas More, apart from condemning the corrupt practices of the Church, were also critical of its doctrine. They issued pamphlets and published books highlighting the abuses of the Catholic Church.

Attempts to reform the Church before the sixteenth century met with failure. Those who protested were punished with death by the Church. However, in the age of reason, the moves of the reformers were supported by some of the rulers of the nation-states. This they thought would provide them an opportunity to free themselves from the interference of the Church in the affairs of the state.

Martin Luther, a monk of the Augustinian Order and a Professor of Theology in the University of Martin Luther Wittenberg, was     a devout Christian and a scrupulous follower of the Catholic faith. However, on his visit to Rome he was shocked by the luxurious life of the officials of the Church. At about this time, a church official Johann Tetzel came to Wittenberg to sell indulgences and Church offices at an auction. Martin Luther wrote a pamphlet against the sale of indulgences, sale of offices and other corrupt practices. He listed out ninety five points and pasted them on the Church door of Wittenberg. 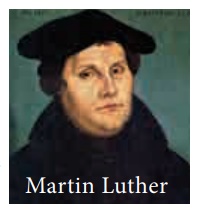 Later the points he raised became the famous Ninety Five Theses. Soon they were printed and circulated widely. When attempts of the Church to make him withdraw his criticisms failed, Pope Leo X issued a Papal Bull excommunicating him. Martin Luther signalled his revolt by publicly burning the Papal Bull. He was then summoned to the Diet that met at Worms in 1521 A.D. (C.E.). Luther attended the Diet to defend himself, despite his friends’ cautions. He was fortunately saved by his patron Frederick, the Wise, the Elector of Saxony. Frederick hid him in his Wartburg Castle, where Martin Luther translated the Bible into German.

Luther further elaborated his differences with the Church. He rejected the belief that ceremonies and penances would lead to salvation. He argued that it was by faith alone that one could attain salvation. He put forward the doctrine of justification by faith. The grace of God would be bestowed by the divine will alone and not by the deeds of the people. Further, the Bible could be read and interpreted by all and not by the Church alone. Thus, he rejected the role of the Church as an intermediary between the individual and God. His teachings became popular throughout Germany. Not only many Princes but the peasants also supported Luther’s cause. Thus, Luther’s reformation marked the first successful break from the Church and establishment of the Protestant Church. When some of the German Princes protested against the imposition of faith on them in the Diet of Speyer or Spires, they came to be known as the Protestants and the reformation that followed also came to be known as the Protestant Reformation.

(b)  Other Protestant Reforms

Huldrych Zwingli (1484-1531 A.D. (C.E.)) of Switzerland and John Calvin (1509-1564) of Geneva followed Martin Luther in protesting against the Church. Like Luther they were also unhappy with the functioning of the Church and questioned the sale of indulgences and ecclesiastical offices. Zwingli worked from Zurich and was against all forms of rituals. Like Zwingli, John Calvin too opposed all forms of display of wealth. Calvin codified his views in his book Institutes of Christian Religion. He controlled the government of Geneva between 1541 A.D. (C.E.) and 1564 A.D. (C.E.). All forms of celebrations and gaiety were banned in Geneva. He believed that Church should be independent of political control on religious matters. Calvinism became more popular and spread to Switzerland, parts of France, the Netherlands and England.

In England, the reformation was brought about due to the personal reasons of the King Henry VIII. Henry VIII longed for a son who would succeed him to the throne. For this purpose Henry wanted to marry again and therefore appealed to the Pope to annul his marriage with Catherine. However, the Holy Roman Emperor was Catherine’s nephew and he pressurized the Pope not to agree to his request. As the Pope kept evading his decision, King Henry VIII grew impatient and broke his ties with Rome. By a series of Acts he established a separate Anglican Church. He confiscated the properties of the Catholic Church and monasteries in England and declared himself the Supreme Head of the Anglican Church.