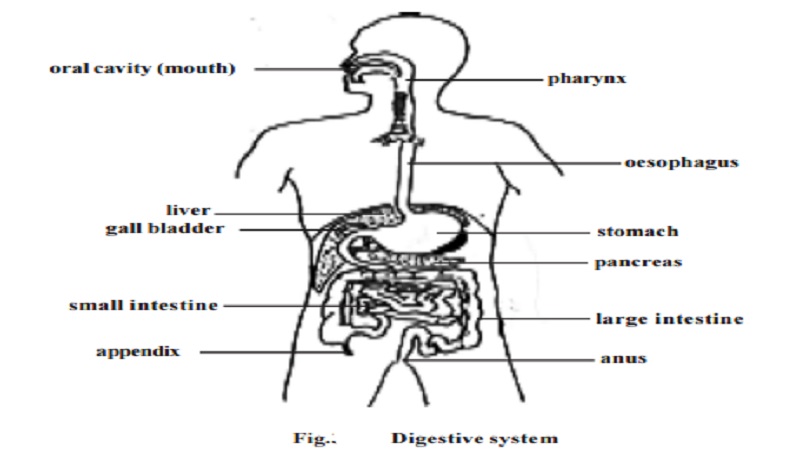 Digestive system : The process of nutrition in man is holozoic. In this type of nutrition,the nutrients are made available to the body through digestion of food.

The process of nutrition in man is holozoic. In this type of nutrition, the nutrients are made available to the body through digestion of food. In digestion, the macromolecules or biopolymers of food are hydrolysed to yield their corresponding monomers. This process is facilitated by enzymes. Thus the digestive system comprises the alimentary canal, associated glands and regions of absorption of food. The digestive tract comprises various organs from mouth to anus. 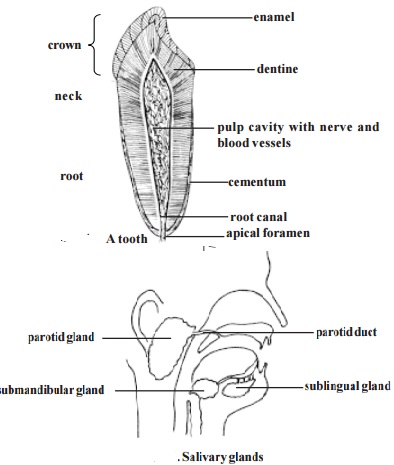 Tongue - It is a large muscular organ. It is attached to the floor of the oral cavity. The anerior part of the tongue is free. A thin fold of tissue called the frenulum attaches the free end to the floor of the mouth. The tongue is di-vided into two parts by a groove called the terminal sulcus. About two thirds of the anterior surface is covered by papillae. Some of them contain taste buds.

Teeth - There are 32 teeth in the mouth of a human adult. These are called as permanent teeth. There are 4 different types of permanent teeth seen. This nature is known as heterodontism. The types of teeth are incisors(8), ca-nines(4), premolars(8) and molars(12). Since the teeth in the right and left side of the mouth are mirror images of each other, the dental arrangement is represented as follows.

Each tooth consists of three regions. These are the upper crown, middle neck and basal root regions. The crown region has one or more cusps. The tooth is made up of a calcified tissue called dentine.

The dentine of the tooth crown is covered by an extremely hard sub-stance called enamel. The surface of the dentine in the root is covered with a bonelike substance called cementum. It helps to anchor the tooth in the jaw. In the centre of the tooth there is a pulp cavity. This cavity is also called as the root canal. This canal contains blood vessels and nerves. The canal opens at the base through apical foramen.

The teeth are set in sockets along the edges of the upper and lower jaws. This region of the jaw is covered by dense fibrous connective tissue and stratified squamous epithelium. It is called as the gingiva.

Salivary glands : These are scattered throughout the oral cavity. Three pairs of glands are larger. They are the parotid, submandibular andsublingual glands. The Parotid glands are the largest. They are located just anterior to the ear on each side of the head. Thesubmandibular glands are found on the inferior borders of the mandible. The sublingual glands are the smallest. They lie immediatly below the mucous membrane in the floor of the mouth. There are other numerous small, coiled, tubular glands in the mouth. They are the lingual (tongue), palatine(palate), buccal and labial(lips) glands. 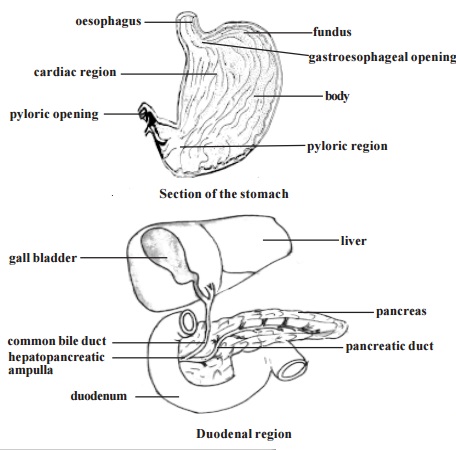 Pharynx : A description of pharynx is provided under respiratory system.

Oesophagus : This part of the digestive tube extends between the pharynx and the stomach. It is about 25 cm long. It lies in the mediastinum of the thorax, anterior to the vertebra and posterior to the trachea. It passes through the diaphragm and ends at the stomach. The oesphagus has thick walls. The inner wall is lined by a moist stratified squamous epithelium. The upper and lower ends of this tube have sphincters to regulate the movements of mate-rials.

Stomach : It is an enlarged sac like structure. This sac found in the upper part of the abdomen is horizontally placed. It is divisible into two regions namely cardiac and pyloric stomachs. The cardiac stomach is towards the left of the abdomen. The oesophagus opens into the cardiac stomach through the gas-troesophageal or cardiac opening. A part of the stomach to the left of the cardiac region is the fundus. The largest part of the stomach is the body. The body narrows to form the pyloric region. The pyloric opening between the pylorus and intestine is surrounded by a ring of muscles called the pyloric sphincter.

Small intestine : It consists of three parts: the duodenum, the jejunum and the ileum. The entire small intestine is about 6m. long.

Duodenum - It is about 25 cm. long. It curves within the abdominal cavity and completes nearly 180 degree arc. Liver and pancreas are associated with the duodenum.

there is a gradual decrease in the diameter of the small intestine. The junction between the ileum and the large intestine is the ileocaecal junction. It has a ring of smooth muscles forming a sphincter, and a one way ileocaecal valve.

Liver : It is the largest visceral organ. It weighs about 1.36 Kg. The liver consists of two major left and right lobes, and two minor lobescaudate and quadrate. The bile secreted by the liver gets collected in the gall bladder. There are two hepatic ducts and they unite to form a single duct. The com-mon hepatic duct is joined by the cystic duct from the gall bladder to form the common bile duct. It empties into the duodenum.

Gall bladder : It is a sac like structure on the inferior surface of the liver. It is about 8 cm long and 4 cm wide.

Caecum : It is the proximal end of the large intestine. At this region large, and small intestines meet. The caecum is about 6 cm in length. Attached to the caecum is a small blind tube about 9 cm long. It is called the vermiform appendix.

Colon : It is about 1.5 - 1.8 m long. It consists of four parts namely the ascending colon, transverse colon, descending colon andsigmoid co-lon. The sigmoid colon extends into the pelvis and ends at the rectum.