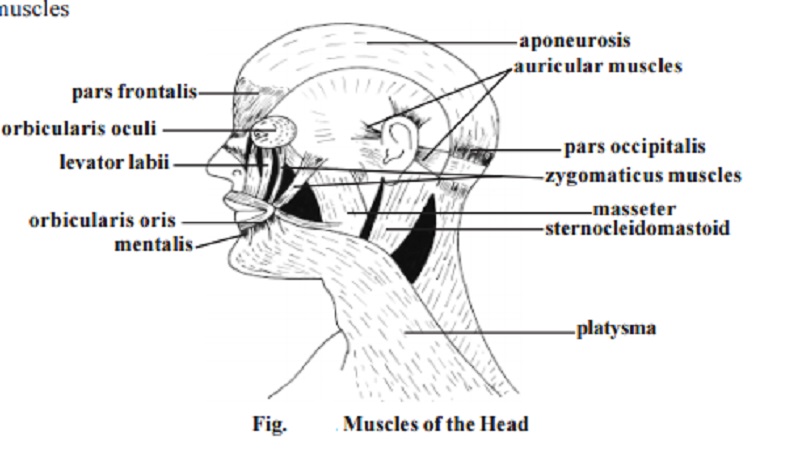 There are two groups of muscles. They are craniofacial and masti-catory muscles. The craniofacial muscles are related to eye orbital margins, eyelids, nose, nostrils, lips, cheeks, mouth, pinna, and the scalp.

Muscles of the human head

There are two groups of muscles. They are craniofacial and masti-catory muscles. The craniofacial muscles are related to eye orbital margins,eyelids, nose, nostrils, lips, cheeks, mouth, pinna, and the scalp. These muscles are also known as muscles of facial expression. Among these muscles those that are related to the lip movement are significant. The facial expression is mostly due to lip movement and positioning of the lips. Such thought related movements are caused by several muscles associated with lips and the skin around the mouth. Since orbicularis oris and buccinator muscles provide lip movement for kissing posture they are known as 'kissing muscles'. Smil-ing is accomplished by zygomasticus major and minor, levator anguli oris andrisorius. The muscles of the lips can also provide expressions such as sneering and frowning. The chin dimples are located between the mentalis muscles

The masticatory (or speech) muscles move the mandible of the lower jaw. The muscles responsible for this movement are masseter temporalisand pterygoid. Tongue movements are caused by intrinsic and extrinsic muscles. Swallowing of food is facilitated by several muscles re-lated to the mouth, roof of pharynx, uvula and other regions. 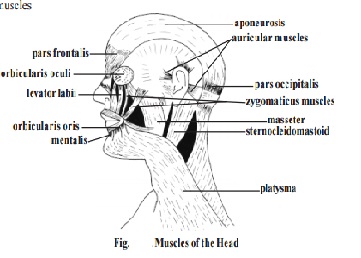 Muscles of the Neck region:

The movements of the neck region are caused by cervical, suprahy-oid, infrahyoid and vertebral muscles.

Muscles of the Trunk region:

The muscles of the vertebral column help to bend and rotate the body. These are strong back muscles that help the trunk to maintain erect posture. The most prominent muscles of this region are the erector spinae, longissi-mus and spinalis. 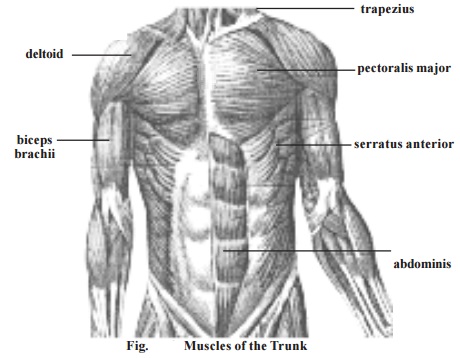 Four important thoracic muscle groups are associated with the pro-cess of breathing. While the process of inspiration is due to scalene and ex-ternal intercostal muscles, the expiration is performed due to internal intercostals and transverse thoracis. Major breathing movement is due todiaphragm, a curved musculofibrous sheet that separates thoracic and ab-dominal cavities.

The inferior opening of the pelvic bone is covered by pelvic dia-phragm muscles. Below these muscles perineum is pressent. The perineum and other 'subfloor' muscles form the urogenital diaphragm. Pelvic and urogenital diaphragm may get strecthed in pregnancy due to weight of the foetus. However by specific exercises they can be strengthened.

Muscles of the upper limb:

The hands are attached to the pectoral girdle and to the vertebral column by large conspicuous muscles such as trapezius, rhomboid major andminor, levator scapulae and lattissimus dorsi.

The trapezius is a flat, triangular muscle. It extends over the back of the neck and upper thorax. It maintains the level and poise of the shoulder. It helps to rotate the scapula forward, so that the arm can be raised above the head. It helps to bend the neck backwards and laterally.

Latissimus dorsi is a large flat triangular muscle. It is a conspicu-ous muscle stretching over the lumbar region and lower thorax. This muscle is useful in adduction, extension and medial rotation of the humerus. It helps in the backward swinging of the arm. By raising the arm above the head it helps to pull the trunk upwards and forwards. It is useful in violent expiratory activi-ties such as coughing or sneezing. It helps in deep inspiration.

Serratus anterior and pectoralis major connect the ribs to the scapula. Pectoralis major extends from the upper thorax and abdomen to act on the humerus. It is a fan shaped muscle. It spreads between the clavicle and the 7th costal cartilage in the front of the chest. It helps to swing the extended arm forward and medially. It helps in climbing. It is active in deep inspirationrectus.

The muscles of the upper arm are the coracobrachialis, biceps, triceps and brachialis. The coracobrachialis arises from the coracoid bone in the shoulder and ends in the humerus of the upper arm. It helps to move the arm forward and medially. The biceps brachii is a large fusiform muscle. It has two proximal heads for attachement. They are connected to the coracoid and shoulder joint. The lower head ends in the radius of the lower arm. It is a powerful muscle causing flexing of the hand. The triceps arises by three heads from scapula and upper part of humerus on the posterior side. The wrist, hand and finger movements are caused by several extrinsic and intrin-sic hand muscles. A detailed study of them could be made in higher classes.

Muscles of the lower limb :

Thigh movements are caused by anterior, postereolateral and deep muscles. The anterior muscles are the iliacus and psoas major which help to flex the thigh. The gluteus maximus form the mass of the buttocks region. Leg movement is caused by the anterior thigh muscles, quadriceps femoris andsartorius. The sartorius is the longest muscle of the body. It runs from the hip to the knee. Muscle movement of ankle foot and toe are caused by several groups of extrinsic and intrinsic muscles. A detailed study of them could be made in higher classes.