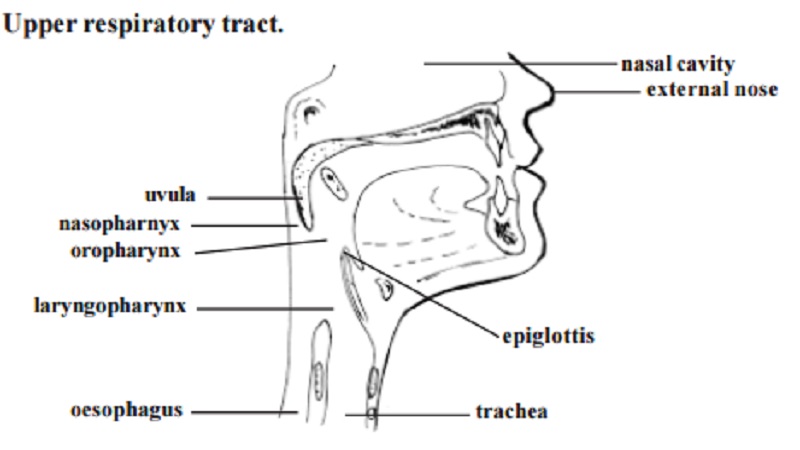 1. Nasal cavity : The nasal cavity follows the external nose. The nose is a visible prominent structure. Internally it is supported by cartilage plates. The bridge of the nose is formed of the nasal bones and extension of the skull

bones(frontal and maxillary). The respiratary passage is divided into two cham-bers by a median partition. The nasal passage opens to the outside through external nostrils. It opens inside by internal nostrils at the pharynx.

2. Pharynx : The buccal cavity and the nasal passage open into the pharynx. It is a common pathway that opens into the oesophagus of the alimentary canal and larynx of the respiratory system.

The pharynx is divided into three regions, namely the nasopharynx, the oropharynx and the laryngopharynx.

The nasopharynx extends from the internal nostril to the region of the uvula. The uvula is a soft outgrowth hanging in between the posterior part of the oral cavity and the pharynx. It prevents the entry of food into the nasal cavity. The wall of the nasopharynx is lined by ciliated columnar epithilium. The middle ear opens into the nasopharynx through two auditory tubes. This arrangement is meant for equalizing the air pressure between the atmosphere and the middle ear. The inner surface of the nasopharynx also contains the pharyngeal tonsil oradenoid meant for defence against infections. An enlargement of the tonsil can interfere with breathing.

The laryngopharynx extends in between the epiglottis and the oesophagus.

3. Larynx : The larynx is seen just behind the pharynx and the buccal cavity. This region is surrounded by cartilages(3 unpaired and 6 paired). These are interconnected by muscles and ligaments.

The unpaired cartilages are the thyroid, cricoid and epiglottis. The thyroid cartilage is the largest. It is also known as the Adam's apple.

The cricoid cartilage forms the base of the larynx. The other cartilages are placed above the cricoid. The epiglottis is attached to the thyroid. It projects as a free flap over the opening of the larynx. It prevents food particles from saentering into the tracheal tube.

4. Trachea (or wind pipe) : It is a membranous tube. The wall is made up of connective tissue and smooth muscles. The wall is provided support by 15-20 'C' shaped cartilage rings. They protect the trachea and keep it open all the time. 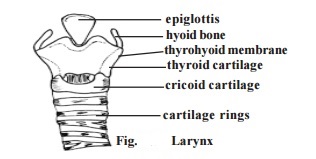 The inner wall of the trachea is lined by mucous membrane. It con-sists of ciliated columnar epithelium. The cilia of this epithelium help to propel mucus and foreign particles towards the larynx.

The length of the trachea is 10-12 cm. Its inner diameter is 12 mm. The trachea extends from the larynx to the level of the 5th thoracic vertebra. The basal part of the trachea divides to form 2 smaller tubes called the pri-mary bronchi (sing : bronchus). The cartilage ring found at the basal region is called the carina. Foreign objects reaching carina stimulate a powerful cough reflex.

The lungs are placed within the thoracic cavity. Each lung is sur-rounded by separate pleural membrane. The region inside the pleural mem-brane is named as the pleural cavity. This cavity is filled with pleural fluid.

The region in between the two lungs is named as the mediastinum. It is a midline partition, being occupied by the heart, trachea and oesophagus. 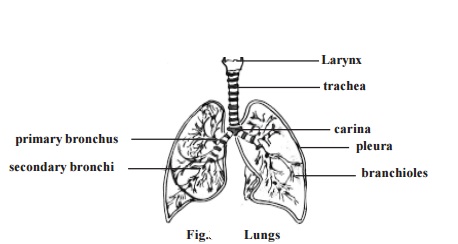 Structures such as the primary bronchi, blood vessels, nerves and lympatic vessels enter or exit the lungs at a specific region on the inner margin of the lungs. This region is known as the hilum. All structures passing through the hilum are referred to as the root of the lung.

The terminal branchioles end in small air filled chambers called al-veoli. The alveoli are thin walled pouches. They collectivelly provide the res-piratory surface for gaseous exchange. The wall of the alveolus is very thin providing a minimal barrier to gaseous exchange between air and blood. The thickness of the wall of the alveolus is as little as 0.05m. Studies have shown that in human lungs there are about 300 million alveoli. They provide a mean total alveolar surface area value of 143 m2.

5. Thoracic wall and muscles of respirations.

Eventhough the lungs are the principal organs of respiration, the process of ventilation happens by an indirect method. Air pressure gradients between thoracic chamber and lung cavity due to thoracic enlargement and reduction cause ventilation of lungs. Thoracic modifications during respiration happen due to several muscles. These are called the muscles of inspiration and expiration. These muscles are the diaphragm, external and internal intercostal muscles between the ribs, pectorals and scalene (Ref. Muscular system).