More than 26 million people in the United States have some form of hearing impairment.

More than 26 million people in the United States have some form of hearing impairment (Larson et. al., 2000). Most can be helped with medical or surgical therapies or with a hearing aid. By the year 2050, about one of every five people in the United States, or almost 58 million people, will be 55 years of age or older. Of this population, almost one half can expect a hearing impairment (U.S. Public Health Service, 2000).

Approximately 10 million persons in the United States have irreversible hearing loss (National Strategic Research Plan of the National Institute on Deafness and Other Communication Dis-orders [NIDCD], 1998). It is estimated that more than 30 mil-lion people are exposed to noise levels that produce hearing loss on a daily basis. Occupations such as carpentry, plumbing, and coal mining have the highest risk of noise-induced hearing loss. Researchers report greater than 90% of coal miners are estimated to have hearing loss by the age of 52 years (Franks, 1996).

Conductive hearing loss usually results from an external ear disorder, such as impacted cerumen, or a middle ear disorder, such as otitis media or otosclerosis. In such instances, the effi-cient transmission of sound by air to the inner ear is interrupted. A sensorineural loss involves damage to the cochlea or vestibu-locochlear nerve.

Early manifestations of hearing impairment and loss may include tinnitus, increasing inability to hear in groups, and a need to turn up the volume of the television. Hearing impairment can also trig-ger changes in attitude, the ability to communicate, the awareness of surroundings, and even the ability to protect oneself, affecting the person’s quality of life. In a classroom, a student with impaired hearing may be disinterested and inattentive and have failing grades. A person at home may feel isolated because of an inability to hear the clock chime, the refrigerator hum, the birds sing, or the traffic pass. A hearing-impaired pedestrian may attempt to cross the street and fail to hear an approaching car. Hearing-impaired people may miss parts of a conversation. Many people are unaware of their gradual hearing impairment. Often, it is not the person with the hearing loss, but the people with whom he or she is com-municating who recognize the impairment first (see Chart 59-2). 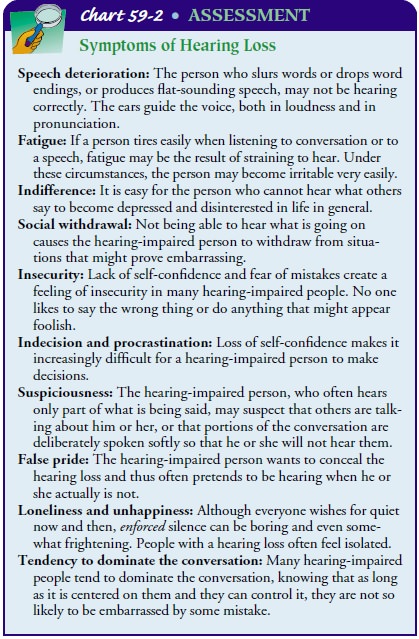 For various reasons, some people with hearing loss refuse to seek medical attention or wear a hearing aid. Others feel self-conscious wearing a hearing aid. Insightful patients generally ask those with whom they are trying to communicate to let them know whether difficulties in communication exist. These attitudes and behaviors should be taken into account when counseling patients who need hearing assistance. The decision to wear a hearing aid is a personal one that is affected by these attitudes and behaviors.

Many environmental factors have an adverse effect on the audi-tory system and, with time, result in permanent sensorineural hearing loss. The most common is noise Noise (ie, unwanted and unavoidable sound) has been identi-fied as one of the environmental hazards of the 20th century. The sheer volume of noise that surrounds us daily has increased from a simple annoyance into a potentially dangerous source of phys-ical and psychological damage.

In terms of physical impact, loud, persistent noise has been found to cause constriction of peripheral blood vessels, increased blood pressure and heart rate (because of increased secretion of adrenalin), and increased gastrointestinal activity. Additional re-search is needed to address the overall effects of noise on the human body. It seems certain, however, that a quiet environment is more conducive to peace of mind. A person who is ill feels more at ease when noise is kept to a minimum. There are numerous factors that contribute to hearing loss (see Chart 59-3). 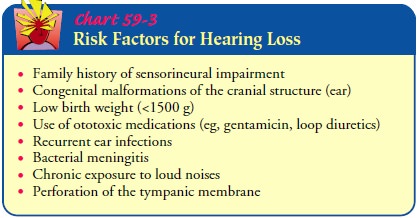 Noise exposure is inherent in many jobs (eg, mechanics, print-ers, pilots, musicians) and in hobbies such as woodworking and hunting. The Occupational Safety and Health Administration re-quires that workers wear ear protection to prevent noise-induced hearing loss when exposed to noise above the legal limits. There are no medications that protect against noise-induced hearing loss; hearing loss is permanent because the hair cells in the organ of Corti are destroyed. Ear protection against noise is the most effective preventive measure available.

About 30% of people 65 years of age and older and 50% of peo-ple 75 years and older have hearing difficulties. The cause is un-known; linkages to diet, metabolism, arteriosclerosis, stress, and heredity have been inconsistent (Cruickshanks et al., 1998).

With aging, changes occur in the ear that may eventually lead to hearing deficits. Although few changes occur in the external ear, cerumen tends to become harder and drier, posing a greater chance of impaction. In the middle ear, the tympanic membrane may atrophy or become sclerotic. In the inner ear, cells at the base of the cochlea degenerate. A familial predisposition to sensori-neural hearing loss is also seen, manifested by a loss in the ability to hear high-frequency sounds, followed in time by the loss of middle and lower frequencies. The term presbycusis is used to describe this progressive hearing loss.

In addition to age-related changes, other factors can affect hearing in the elderly population, such as lifelong exposure to loud noises (eg, jets, guns, heavy machinery, circular saws). Cer-tain medications, such as aminoglycosides and aspirin, have oto-toxic effects when renal changes (eg, in the older person) result in delayed medication excretion and increased levels of the medica-tions in the blood. Many older people take quinine for treatment of leg cramps; quinine can cause a hearing loss. Psychogenic fac-tors and other disease processes (eg, diabetes) also may be partially responsible for sensorineural hearing loss.

When a hearing problem occurs, an evaluation is warranted. Even with the best medical care, the person must learn to adjust to various degrees of hearing loss. Care of elderly patients includes recognizing emotional reactions related to hearing loss, such as suspicion of others because of an inability to hear adequately; frustration and anger, with repeated statements such as, “I didn’t hear what you said”; and feelings of insecurity because of the in-ability to hear the telephone or alarms.

If a hearing loss is permanent or untreatable with medical or sur-gical intervention or if the patient elects not to have surgery, aural rehabilitation  may be beneficial.

The nurse who understands the different types of hearing loss will be more successful in adopting a communication style to fit the patient’s needs. Trying to speak in a loud voice to a person who cannot hear high-frequency sounds only makes understanding more difficult. However, strategies such as talking into the less impaired ear and using gestures and facial expressions can help (see Chart 59-4).major issue for many deaf and hearing-impaired people is that they have other health problems that often do not receive at-tention, in large part because of communication problems with their health care practitioners.

To effectively meet the health care needs of these patients, practitioners are legally obligated to make accommodations for the patient’s inability to hear. Providing the services of interpreters or those who can communicate through sign language is essential in many situations so that the practi-tioner can effectively communicate with the patient.

During health care and screening procedures, the practitioner (eg, dentist, physician, nurse) must be aware that patients who are deaf or hearing impaired are unable to read lips, see a signer, or read written materials in dark rooms required during some diag-nostic tests. The same situation exists if the practitioner is wear-ing a mask or not in sight (eg, x-ray studies, magnetic resonance imaging [MRI], colonoscopy).

Nurses and other health care practitioners must work with deaf and hearing-impaired patients and their families to identify workable and effective means of communication. Nurses can serve as catalysts throughout the health care system to ensure that accommodations are made to meet the communication needs of these patients.