The rate of uptake of glucose (and other sugars) from the gut is determined by the rate of hydrolysis of oli-gosaccharides and polysaccharides that are suscepti-ble to pancreatic and brush border enzymes.

The rate of uptake of glucose (and other sugars) from the gut is determined by the rate of hydrolysis of oli-gosaccharides and polysaccharides that are suscepti-ble to pancreatic and brush border enzymes. In addi-tion to the primary structure of the polymers, many factors intrinsic to the ingested foods and to the con-sumer influence these rates, including:

●      macrostructure and microstructure of food, especially whether cell walls are intact

●      presence (or otherwise) of enzyme inhibitors

●      degree of comminution in the mouth

All three main sugars absorbed from the gut (glucose, galactose, and fructose) are transported via the portal vein to the liver (glucose concentrations in the portal vein after a meal can rise to almost 10 mM), but only glucose appears in significant concentrations in the peripheral circulation. Most of the galactose and fructose is removed during first pass through the liver via specific receptors on hepatocytes, so that the blood concentration of these sugars rarely exceeds 1 mM. Within the hepatocytes, galactose is converted to galactose-1-phosphate by the enzyme galactoki-nase and then to glucose-1-phosphate in three further steps. Fructose is also phosphorylated in hepatocytes (by fructokinase) to fructose-1-phosphate, which is subsequently split by aldolase B to yield one molecule of each of the glycolytic intermediates dihydroxyace-tone phosphate and glyceraldehyde. Although the liver removes some glucose, using the bidirectional transporter GLUT2, most is transported in the periph-eral circulation for utilization by muscle, adipose, and other tissues.

Peripheral tissues utilize glucose and the above-men-tioned intermediates from fructose and galactose via glycolysis and the citric acid or Krebs cycle pathways. Glycolysis, a sequence of reactions in which glucose is converted to pyruvate, with concomitant produc-tion of ATP, is the prelude to the citric acid cycle and electron transport chain, which together release the energy contained in glucose. Under aerobic condi-tions pyruvate enters mitochondria, where it is com-pletely oxidized to carbon dioxide and water. If the supply of oxygen is limited, as in actively contracting muscle, pyruvate is converted to lactate. Therefore, complete oxidation of glucose to carbon dioxide and water occurs under aerobic conditions through the reactions of the glycolytic pathway (in the cell’s cyto-plasm), the Krebs cycle, and oxidative phosphoryla-tion (in the mitochondrion). The overall reaction can be summarized stoichiometrically as:

Approximately 40% of the free energy ( G) released by this transformation is captured by the production of ATP (38 moles of ATP per mole of glucose oxi-dized), which is used for a wide variety of purposes, including powering muscle contraction, transporting substances across membranes against a concentration gradient, and synthesis of cell macromolecules. The remainder of the free energy is released as heat.

When the demand for oxygen exceeds supply, as in muscle during intense exercise, anaerobic glycolysis produces lactic acid as a major end-product. The rela-tive lack of oxygen means that oxidative phosphoryla-tion cannot keep up with the supply of reduced dinucleotides and, for glycolysis to proceed, NADH must be recycled back to NAD+. This is achieved by the reaction:

which is catalyzed by the enzyme lactate dehydro-genase. Anaerobic glycolysis provides some or all of the ATP needs for some cells and tissues; for example, erythrocytes, white blood cells, lymphocytes, the kidney medulla, and eye tissues. The lactate released from tissues undergoing anaerobic glycolysis is taken up by other tissues that have a high number of mito-chondria per cell, such as heart muscle, in which the lactate is converted back to pyruvate and then enters the Krebs cycle via acetyl coenzyme A.

In hepatic and muscle cells some glucose is con-verted to glycogen in the glycogenesis pathway. Gly-cogen is a readily mobilized storage form of glucose residues linked with α-1,4-glycosidic bonds into a large, branched polymer. Glycogen is a reservoir of glucose for strenuous muscle activity and its synthesis and degradation are important for the regulation of blood glucose concentrations.

The exocrine pancreas (and other tissues) is primed to expect a rise in blood glucose concentration by peptide hormones such as gastric inhibitory peptide (GIP) that are secreted from enteroendocrine cells within the mucosa of the small bowel. As the glucose concentration in blood rises above 5 mM after a meal, these peptide hormones amplify the response of the β-cells of the endocrine pancreas, resulting in the dis-charge of the hormone insulin from secretory gran-ules which fuse with the cell membrane. Insulin has several effects on metabolism, including facilitating the transport, by GLUT4, of glucose into adipocytes and muscle cells.

In healthy people, blood glucose concentration (glycemia) is homeostatically controlled within a fairly narrow range. It seldom falls below about 5 mM, even after a prolonged fast, and returns to this value within a couple of hours of a meal. In the absence of uptake from the gut (the postabsorptive state), about 8 g glucose per hour is provided for those tissues with an obligatory demand for glucose – namely, the brain, red blood cells, mammary gland, and testis – by breakdown of stores of glycogen in the liver and muscle and by gluconeogenesis. The brain of an adult has a glucose requirement of about 120 g/day. The amount readily available in glycogen approximates 190 g. In long periods of fasting and starvation glucose must be formed from noncarbohydrate sources by a process known as gluconeogenesis. Gluconeogenesis occurs in the liver (responsible for about 90% of gluconeogenesis) and kidney and is the synthesis of glucose from a range of substrates including pyruvate, lactate, glycerol, and amino acids. Amino acids are derived by catabolism of the body’s proteins. All amino acids, with the exceptions of lysine and leucine, are glucogenic. Triacylglycerols (from adipose tissue) are catabolized to release glycerol. These gluconeo-genic processes are triggered by a fall in blood glucose concentration below about 5 mM and are signaled to the tissues by the secretion of glucagon and the glu-cocorticoid hormones.

Diabetes and its consequences

Diabetes may be diagnosed as an exaggerated response in blood glucose concentration following ingestion of a fixed amount of glucose (glucose tolerance test). The most common forms of diabetes are type 1 dia-betes (T1DM) and type 2 diabetes (T2DM). T1DM results from the autoimmune destruction of the β-cells of the endocrine pancreas (possibly following viral exposure), the consequence of which is insulin insufficiency. Control of blood glucose concentra-tions in T1DM requires the exogenous supply of insulin by injection. Implanted insulin minipumps or pancreatic β-cells may offer alternative forms of treat-ment in the future. Symptoms of type 1 diabetes include the presence of glucose in urine, passage of large volumes of urine, body weight loss, and, in extreme cases, ketosis (excess production of acetone, acetoacetate, and β-hydroxybutyrate). Although there is good evidence of genetic predisposition to T2DM, expression of the disease is due mainly to lifestyle (excess energy intakes and low physical activity), resulting in obesity, especially when the extra fat is accumulated on the trunk. The early stages of T2DM are characterized by insulin insensitivity/resistance, i.e., failure of the tissues to produce a normal response to insulin release that can be seen as relatively wide swings in blood glucose concentrations following a carbohydrate-containing meal. Raised blood glucose concentration sustained for several years is believed to be fundamental to the spectrum of complications, including macrovascular (atherosclerosis) and micro-vascular diseases and problems with the kidneys (nephropathy), nerves (neuropathy), and eyes (reti-nopathy and cataract) experienced by diabetics.

As an aid to the dietary management of blood glucose concentrations in diabetics, Jenkins and colleagues (1981) introduced the concept of the glycemic index (GI), which provides a means of comparing quanti-tatively the blood glucose responses (determined directly by in vivo experiments) following ingestion of equivalent amounts of digestible carbohydrate from different foods. When a range of carbohydrate-containing foods was ranked according to their GI values, there was a strong linear relationship with the rapidly available glucose (RAG) from similar foods determined in vitro as the sum of free glucose, glucose from sucrose, and glucose released from starches over a 20 minute period of hydrolysis with a battery of enzymes under strictly controlled conditions (Englyst method; Englyst et al. 1999). This offers the possibil-ity of assaying foods in vitro for their RAG content, which will be quicker and cheaper than the current approach based on GI measurements in vivo.

Studies with glucose and starches enriched with the stable isotope carbon-13 have demonstrated that glucose absorption from the gut following a meal con-tinues for several hours after blood concentrations have returned to fasting levels. In this later postpran-dial period, insulin secretion is sufficient to ensure that the rate of glucose absorption is matched by the rate of glucose removal from the circulation. 13C-Labeled substrates are being used increasingly to investigate the kinetics of digestion, absorption, and metabolic disposal of glucose and other sugars from a range of foods. When continued over several years, high rates of glucose absorption and the subsequent challenge to the capacity of the pancreatic β-cells to secrete insulin may be the primary determinants of insulin resistance and eventual pancreatic failure that contribute strongly to the etiology of diabetes and cardiovascular disease. Such kinetic studies are likely to be helpful in identifying foods with slower rates of intestinal hydrolysis – information that can be used in public health advice or in counseling of individuals.

When glucose and fructose are available simultane-ously after a meal containing sucrose, how does the body select which fuel to use first for oxidative purposes? This question has been resolved by experi-ments in which volunteers consumed, on two sepa-rate occasions, high-sucrose test meals which were identical except that one or other of the constituent monomeric sugars was 13C-labeled in each meal. The volunteers blew into tubes at intervals after the meals to provide breath samples for measurement of enrich-ment of expired carbon dioxide with 13C. The results showed that, after the high sucrose meal, fructose was oxidized much more rapidly and extensively than was glucose (Figure 5.2). 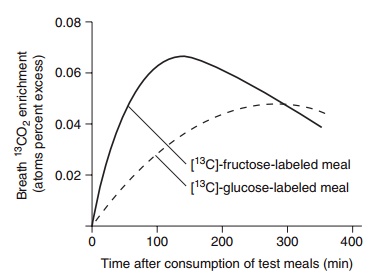 Figure 5.2 Enrichment of breath 13CO2 following ingestion of high-sucrose test meals labeled with [13C]-fructose and [13C]-glucose. (Redrawn from Daly et al., 2000, with permission of the American Society for Nutrition.)

This rapid oxidation of fructose may be explained by the fact that, because it is phosphorylated in hepa-tocytes, it bypasses 6-phosphofructokinase, one of the key regulatory enzymes in glycolysis.