As with other food components, the digestive fate of particular carbohydrates depends on their inherent chemical nature and on the supramolecular structures within foods of which they are a part.

As with other food components, the digestive fate of particular carbohydrates depends on their inherent chemical nature and on the supramolecular structures within foods of which they are a part.

To be absorbed from the gut, carbohydrates must be broken down to their constituent monosaccharide units, and a battery of hydrolytic enzymes capable of splitting the bonds between sugar residues is secreted within the mouth, from the pancreas, and on the apical membrane of enterocytes. While these carbohydrases ensure that about 95% of the carbohydrate in most human diets is digested and absorbed within the small intestine, there is considerable variation in bioavailability between different carbohydrate classes and between different foods. Carbohydrates that are digested to sugars and absorbed as such in the small bowel are called “glycemic” carbohydrates.

Hydrolysis in the mouth and small bowel

The major carbohydrase secreted by the salivary glands and by the acinar cells of the pancreas is the endoglycosidase α-amylase, which hydrolyzes (digests) internal α-1,4-linkages in amylose and amylopectin molecules to yield maltose, maltotriose, and dextrins. These oligosaccharides, together with the food disac-charides sucrose and lactose, are hydrolyzed by spe-cific oligosaccharidases expressed on the apical membrane of the epithelial cells that populate the small intestinal villi. Sucrase–isomaltase is a glycopro-tein anchored via its amino-terminal domain in the apical membrane that hydrolyzes all of the sucrose and most of the maltose and isomaltose. The resulting monomeric sugars are then available for transport into the enterocytes.

Absorption and malabsorption in the small bowel

Glucose and galactose are transported across the apical membrane by the sodium–glucose transport protein-1 (SGLT1), a process that is powered by Na+/ K+-ATPase on the basolateral membrane (Figure 5.1). In contrast, fructose is absorbed by facilitated trans-port via the membrane-spanning GLUT5 protein. A member of the same family of transporter proteins, GLUT2, is the facilitated transporter on the basolat-eral membrane which shuttles all three monosaccha-rides from the enterocyte towards the blood vessels linking with the portal vein for delivery to the liver.

The capacity of the human intestine for transport of glucose, galactose, and fructose is enormous – esti-mated to be about 10 kg per day – so that this does not limit absorption in healthy individuals. Carbohy-drate malabsorption is usually caused by an inherited or acquired defect in the brush border oligosacchari-dases. More than 75% of human adults are lactose intolerant because of a loss (possibly genetically determined) of lactase activity after weaning (primary lactose intolerance). In such individuals, ingestion of more than very small amounts of lactose leads to the passage of the sugar to the large bowel, where it is fermented to produce short-chain fatty acids (SCFAs) and gases as end-products. The appearance of hydro-gen in the breath after ingestion of lactose is the basis for diagnosis of malabsorption of this carbohydrate. Diseases of the intestinal tract, such as protein-energy malnutrition, intestinal infections, and celiac disease, which reduce expression of lactase on the enterocyte apical membrane, can result in secondary lactase insufficiency. Sucrase–isomaltase activity, which rises rapidly from the pylorus towards the jejunum and then declines, is inducible by sucrose feeding. About 10% of Greenland Eskimos and 0.2% of North Amer-icans have sucrase–isomaltase deficiency. A missense 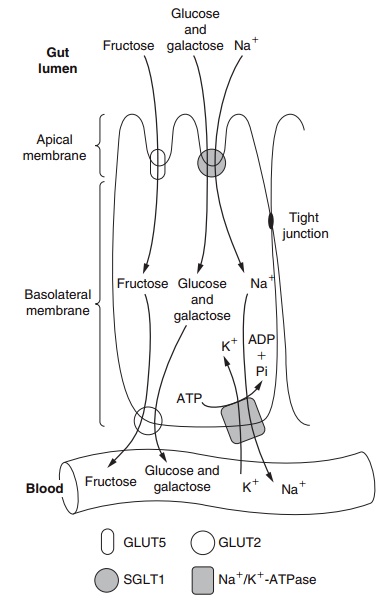 Figure 5.1 Sugar transporters on enterocytes, showing the transport of glucose and galactose across the apical membrane.

mutation in SGLT1 is responsible for the very rare glucose–galactose malabsorption syndrome, but such individuals absorb fructose well. In up to 60% of adults, the capacity for facilitated diffusion of fructose appears to be limited, resulting in symptoms of “intestinal distress” when challenged by consumption of 50 g fructose.