By whatever means an exogenote is conveyed into a recipient cell, its effect depends on what happens after transfer.

By whatever means an exogenote is conveyed into a recipient cell, its effect depends on what happens after transfer. There are basically three possible fates. The exogenote DNA may be degraded by a nuclease, in which case no heritable change is brought about. It may be stabilized by circularization and remain separate from the endogenote. In this case, if it is unable to replicate, it will be unilinearly inherited (eg, abortive transduction). If it is capable of self-replication, it will become established as an autonomous, inherited plasmid. The third possible fate is recombination between exogenote and endogenote, resulting in the formation of a partially hybrid chromosome with segments derived from each source. These possibilities are diagrammed in Figure 4 – 6. 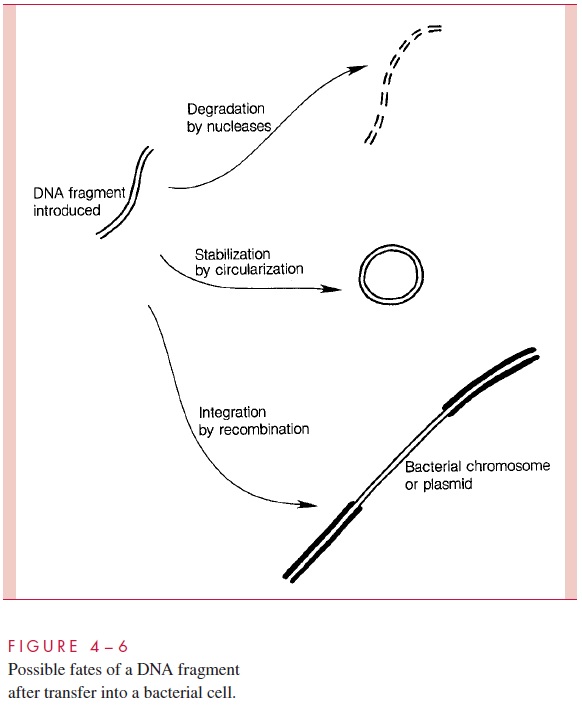 One mechanism by which an exogenote can recombine with the bacterial chromosome is called homologous recombination. This term reflects one of the two requirements for this process: (1) the exogenote must possess reasonably large regions of nucleotide sequence identity or similarity to segments of the endogenote chromosome, because extensive base pairing must occur between strands of the two recombining molecules; and (2) the recipient cell must possess the genetic ability to make a set of enzymes that can bring about the covalent substitution of a segment of the exogenote for the homologous region of the endogenote. Not all the details are known, but the latter process includes breaking one strand of each recombining molecule at a time and pairing it with the unbroken, complementary strand of the other molecule. The ends of the broken strands are partially digested, then repaired and joined so that the rejoined strands are now continuous between the chromosomes. A protein known as RecA (recombination) controls the entire process. The same breakage and reunion process then links the second strand of each recombining DNA molecule. This crossoverevent repeated further down the chromosome results in the substitution of the exogenote segment between the two crossovers for the homologous segment of the endogenote. This process is schematically presented in a very simplified form in Figure 4 – 7. Homologous recombination is responsible for integration of DNA frag-ments transferred by generalized transduction, by plasmid-mediated conjugation, and by natural transformation.

The second major type of recombination is actually a group of separate mechanisms that are RecA independent, that rely on only limited DNA sequence similarity at the sites of crossover, and that are mediated by different sets of specialized enzymes designed to cat-alyze recombination of only certain DNA molecules. The name for this large group of mechanisms, site-specific recombination, reflects the fact that these recombinational events are restricted to specific sites on one or both of the recombining DNA molecules. The enzymes that bring about site-specific recombination operate not on the basis of DNA homology but on recognition of unique DNA sequences that form the borders of the specific sites. These enzymes are commonly encoded by genes on the exogenote.

In addition to the special kind of recombination represented by prophage integration, a particular form of site-specific recombination occurs in other situations of enormous consequence to medical microbiology. These involve special genetic units called trans-posable elements, which have proven to be so important in the life of bacteria, particu-larly in their roles in the pathogenesis of infectious disease, that a separate section must be devoted to their description.