Conjugation is the transfer of genetic information from donor to recipient bacterial cell in a process that requires intimate cell contact; it has been likened to mating. By themselves, bacteria cannot conjugate. Only when a bacterial cell contains a self-transmissible plasmid (see below for definition) does DNA transfer occurs. In most cases, conjugationinvolves transfer only of plasmid DNA; transfer of chromosomal DNA is a rarer event, and is mediated by only a few plasmids. Plasmids are of enormous importance to medical microbiology. They are discussed in detail later, but to understand conjuga-tion we should introduce some of their features at this point. 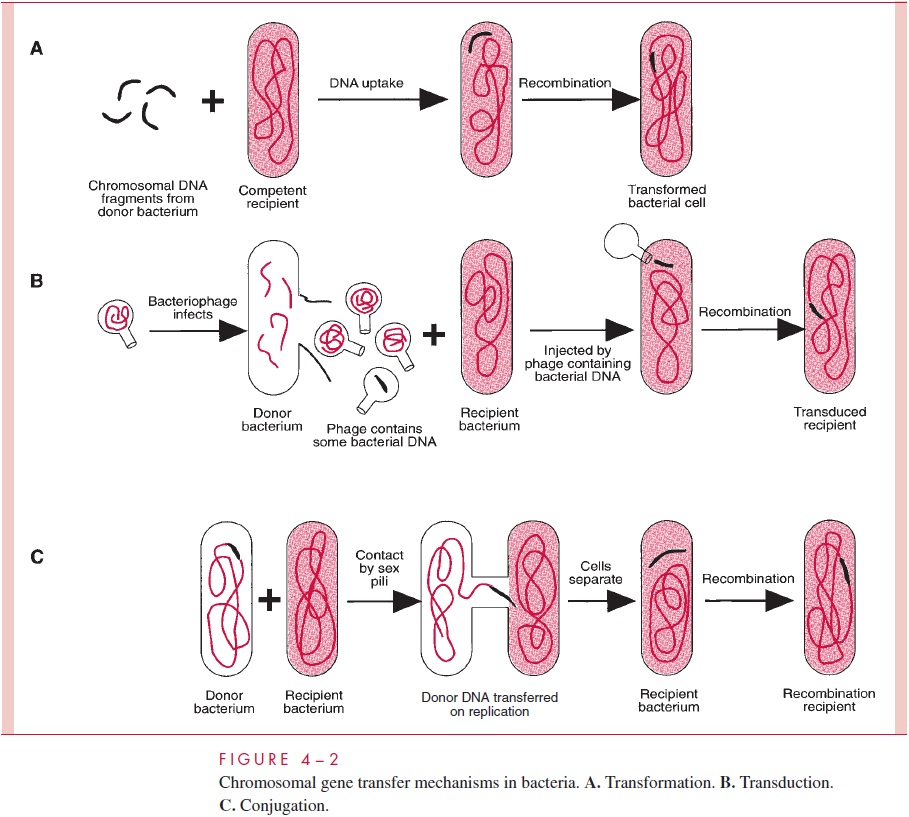 Plasmids are autonomous extrachromosomal elements composed of circular double-stranded DNA; a few rare linear examples have been found. Plasmids are found in most species of Gram-positive and Gram-negative bacteria in most environments. Plasmids gov-ern their own replication by means of special sequences and proteins. They replicate within the host cell (and only within the host cell) and are partitioned between the daughter cells at the time of cell division. In addition, many plasmids are able to bring about their own transfer from one cell to another by the products of a group of genes called tra (for transfer); such plasmids are called conjugative plasmids. Other plasmids, called noncon-jugative, lack this ability. Thetragenes, of which there may be dozens, encode the struc-tures and enzymes that accomplish conjugation. One of these structures is a specialized pilus  called the sex pilus, which confers the ability to seize recipient cells on the plasmid-containing donor cells. Retraction of the pilus draws the donor and recipi-ent cell into the intimate contact needed to form a conjugal bridge through which DNA can pass. One strand of the plasmid DNA is then enzymatically cleaved at a site called the ori-gin of transfer (oriT), and the resulting 5’ end of the strand is guided into the recipientcell by the action of various tra-encoded proteins (Fig 4 – 3). Both the introduced strand and the strand remaining behind in the donor cell direct the synthesis of their complemen-tary strand in a process called transfer replication, resulting in complete copies in both donor and recipient cell. Finally, circularization of the double-stranded molecules occurs, the conjugation bridge is broken, and both cells can now function as donor cells. 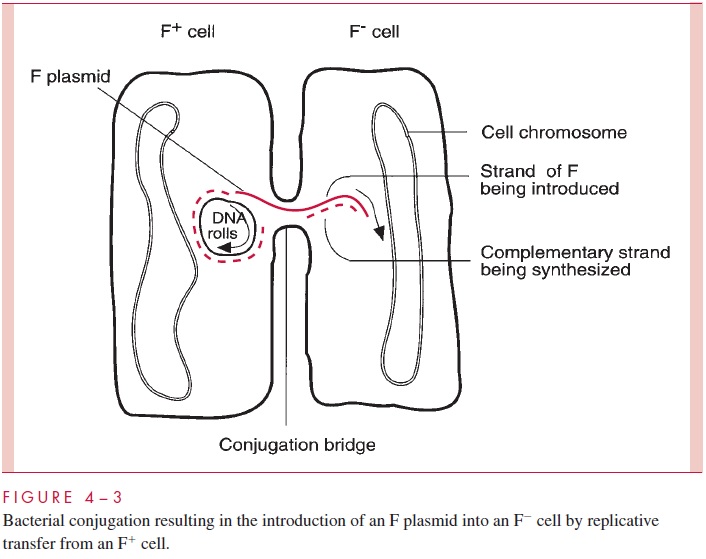 Conjugation is a highly evolved and efficient process. Suitable mixtures of donor and recipient cells can lead to nearly complete conversion of all the recipients into donor, plasmid-containing cells. Furthermore, although some conjugative plasmids can transfer themselves only between cells of the same or closely related species, others are quite promiscuous, promoting conjugation across a wide variety of (usually Gram-negative) species. Conjugation appears to be a carefully regulated process, normally kept in check by the production of a repressor encoded by one of the tra genes. Interestingly, noncon-jugative plasmids that happen to inhabit a cell with a conjugative plasmid can under some circumstances be transferred due to the conjugation apparatus of the latter; this process is called plasmid mobilization. As the later discussion of plasmids shows, their conjugal properties have enormous implications in medicine.

After many inconclusive attempts by microbiologists to learn whether a sexual process of ge-netic exchange existed among bacteria, J. Lederberg and E. Tatum discovered conjugation in 1946. What they observed was a transfer of chromosomal genes between cells of two differ-ent strains of E. coli. Their discovery stimulated an intensive analysis of the mechanism, leading to the discovery of an agent, the F factor (for fertility factor), that conferred on cells the ability to transfer bacterial chromosome genes to recipient cells. Now it is recognized that the F factor is a conjugative plasmid, although an atypical one in several respects.

The F plasmid is a normal conjugative plasmid in that it possesses many tra genes en-coding a sex pilus (the F-pilus) as well as the ability to form a conjugation bridge, to initi-ate transfer replication, and to perform all the other steps of plasmid transfer. Thus, a cell harboring the F plasmid (an F+cell) can conjugate with a recipient F- cell, and in the process the latter becomes F+ . The process is immediate and efficient because the F factor has lost autoregulation of the conjugation process. However, these properties do not explain how the F plasmid can bring about transfer of chromosomal genes, which is more closely related to another property of F — its ability to integrate at low frequency into the bacterial chromosome at seven or eight chromosomal sites, resulting in linearization of the plasmid DNA as part of the giant circular chromosomal molecule. A cell in which this integration event has occurred is designated a high-frequency recombination (Hfr) cell; it is only this spontaneous mutant in an F- population that transfers donor chromosomal genes. When an Hfr cell encounters an F- cell, conjugation occurs and the usual transfer replication is initi-ated at oriT, within the linear F segment. However, in this circumstance, breaking the integrated plasmid DNA at oriT results in the formation of a linear strand in which the entire bacterial chromosome lies between two portions of the F genome (Fig 4 – 4), and therefore the leading segment of F enters the F cell followed by bacterial genes one after the other. The conjugation bridge usually ruptures long before the entire bacterial chromo-some can be introduced, resulting in the transfer of only one part of the F genome and a variable length of the bacterial chromosome. Thus, conjugation between an Hfr and an F- cell leaves the recipient still F- , but having received bacterial genes; the donor remains Hfr because it retains a copy of the chromosome with its integrated F genome. There are other fertility plasmids, but F remains the best studied. 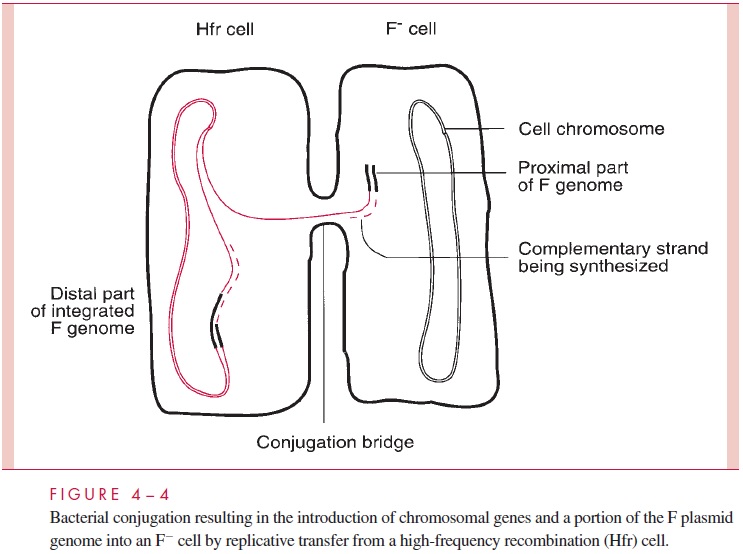 There is an additional wrinkle to the transfer of chromosomal genes by conjugation in E. coli. It is a process termedsexduction,in which an F plasmid transfers from one cellto another a few bacterial chromosomal genes that it happens to contain. This comes about because the F genome in an Hfr cell can, at low frequency, excise itself from the chromosome and circularize into plasmid form. When this excision is imperfect, or in-volves recombinations with other insertion sites, segments of the bacterial chromosome can become included in the plasmid (Fig 4 – 5). When the resulting plasmid, called F to note its content of some bacterial DNA, is transmitted to recipient cells at high frequency by conjugation, the chromosomal genes are transferred as hitchhikers; this is the process of sexduction. By similar processes, segments of bacterial chromosomes can become in-corporated into other plasmids, discussed, that confer resistance to antimicrobics. 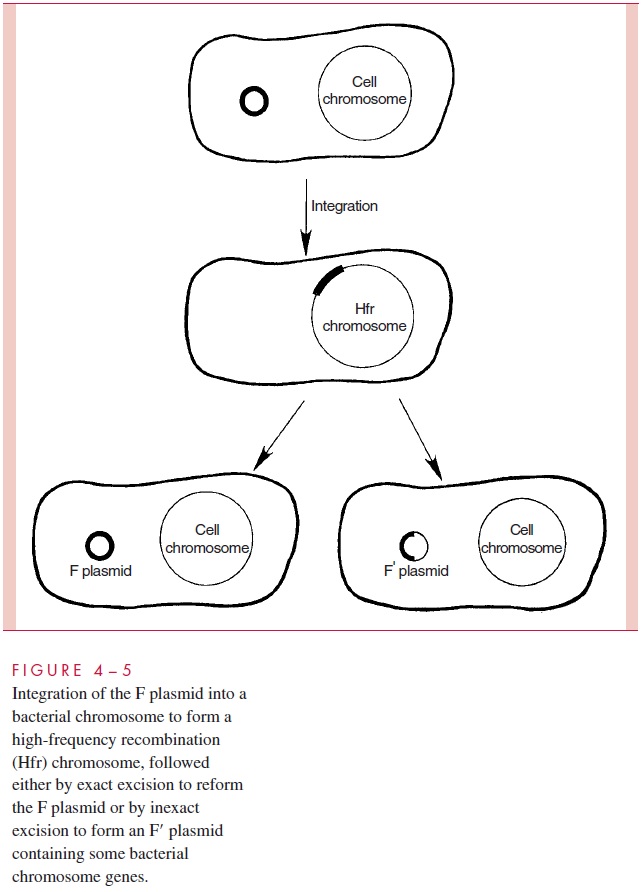 Plasmids carrying genes encoding antimicrobic resistance, common pili and other adhesins, and some exotoxins are readily transferred by conjugation among Gram-positive bacteria in the natural environment as well as in the laboratory. However, conjugation involving chro-mosomal genes may differ between Gram-negative and Gram-positive species, as judged by its characteristics in two well-studied examples, E. coli and Enterococcus faecalis.Conjuga-tion in E. faecalis is mediated by plasmids, but there is also an involvement of chromosomal genes in the process. Donor and recipient cells do not couple by means of a sex pilus but rather by the clumping of cells that contain a plasmid with those that do not. This clumping is the result of interaction between a proteinaceous adhesin on the surface of the donor (plasmid-containing) cell and a receptor on the surface of the recipient (plasmid-lacking) cell. Both types of cells make the receptor (possibly cell wall lipoteichoic acid), but only the plasmid-containing cell can make the adhesin, presumably because it is encoded by a plas-mid gene. Interestingly, donor cells make the adhesin only when in the vicinity of recipient cells because the recipients secrete small peptide pheromones that serve to notify the donor cells of the presence of recipients. Donor cells promptly make adhesin when they sense the pheromone. As a result, clumps are formed, and plasmid DNA is transferred across conju-gation bridges into the recipient cells held in the clumps.

In addition to enterococcal species, species of Bacillus, Staphylococcus, and Clostrid-ium have been found to contain conjugative plasmids. Conjugative transfer of genes hasalso been observed in a number of Gram-positive species in the apparent absence of plasmid DNA. In several instances these transfers involve conjugative transposons (to be discussed later), and it appears that a plasmid intermediate is formed, al-though only transiently.

Before continuing with our discussion of plasmids, we should complete the story of what happens to DNA introduced into recipient cells by any of the three transfer processes, transformation, transduction, and conjugation.