Gastrointestinal Tract and its Accessory Organs 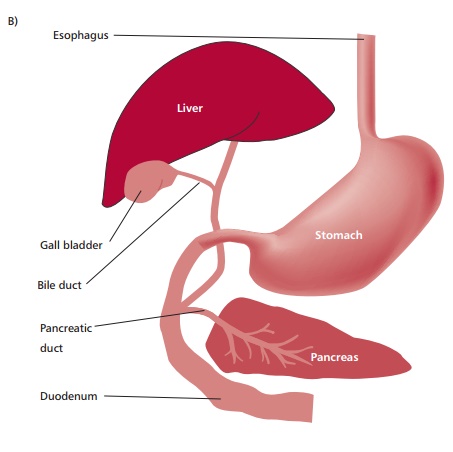 The GIT may be described as a tubular system with distinctive regions that begin with the mouth leading to the pharynx, esophagus, stomach, the small and large intestines and terminating at the anus.

THE GASTROINTESTINAL TRACT AND ITS ACCESSORY ORGANS

The GIT may be described as a tubular system with distinctive regions that begin with the mouth leading to the pharynx, esophagus, stomach, the small and large intestines and terminating at the anus (Figure 11.1 (A)). It is associated with several accessory digestive organs, such as the pancreas, liver and gall bladder (Figure 11.1 (B)). The walls of the GIT have a fairly common substructure (Figure 11.2 (A) and (B)) and its interior is called the lumen. The GIT and accessory organs are bound to each other and to the inner wall of the abdomen by the peritoneum. This is a strong, colorless membrane with a smooth surface that consists of two parts; the parietal peritoneum, which lines the abdominal cavity, and the visceral peritoneum that covers most of the organs in the abdomen (Figure 11.3). The thin space between the two parts, called the peritoneal cavity, is filled with serous fluid. In males, the peritoneum forms a closed sac but in females it is con-tinuous with the mucous membrane of the uterine tubes. The mesentery is a fan shaped portion of peritoneum that extends from the posterior abdom-inal wall and wraps around the small intestine and returns to its origin forming a double layer (Figure 11.4). The mesentery contains the blood and 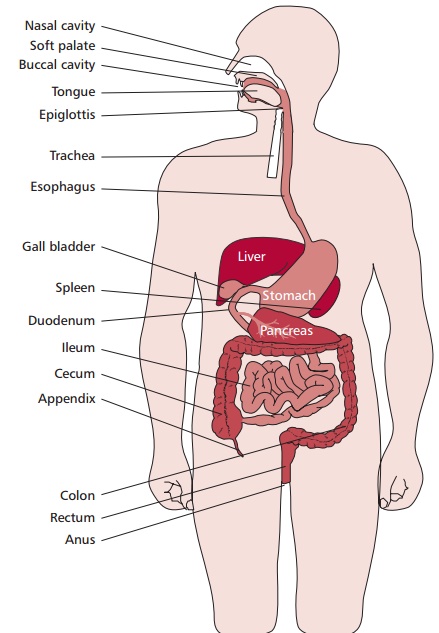 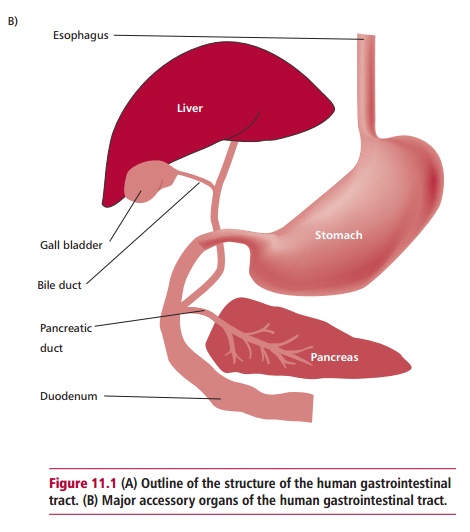 lymphatic vessels and nerves that supply the small intestine. Another peri-toneal fold, the mesocolon (Figure 11.4), has similar functions with respect to the large intestine. The mesentery and mesocolon anchor the intestines in place but only loosely, allowing them considerable movement as muscu-lar activities mix and move the contents through the GIT.

The pancreas is found near the stomach and small intestine (Figure 11.1 (A) and (B)) and functions as both an exocrine and an endocrine gland. In its exo-crine role it produces pancreatic juice that is released into the first part of the small intestine, the duodenum, through the pancreatic duct. This secretion contains precursors of digestive enzymes that are activated and function in the GIT, and also hydrogen carbonate (HCO3–) that increases the pH of GIT contents. This latter function is vital since the material leaving the stomach is acidic. The pancreas produces about 1200–1500 cm3 of pancreatic juice per 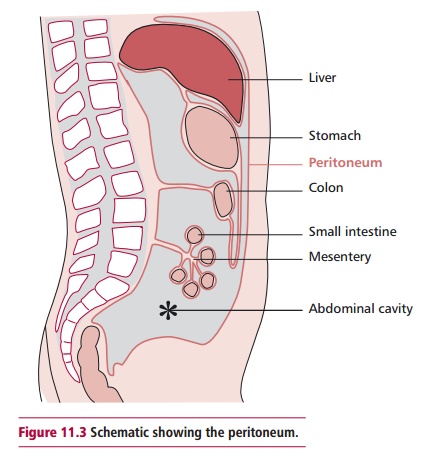 day. Within the tissues of the pancreas are groups of cells called the islets of Langerhans. The cells in the islets have endocrine functions and produce and secrete the peptide hormones glucagon and insulin that regulate the concen-tration of glucose in the blood .

The liver is the largest organ in the body (Figure 11.1 (A) and (B)), weighing about 1.5 kg. It has two major lobes, each divided into functional units called lobules. Lobules consist of cuboidal cells arranged around a central vein into which the blood drains. Between the plates of hepatic cells are sinusoids that are supplied by the portal vein and hepatic artery. The sinusoids are lined with phagocytic Kupffer cells that belong to the reticuloendothelial system and their main function is to engulf bacteria and other foreign particles in blood. Thus there is a dual blood supply to liver, with blood coming from the digestive tract and spleen through the portal vein, and from the aorta in the hepatic artery (Figure 14.2). About a third of incoming blood is arterial, and brings oxygen, whereas two thirds is venous from the portal vein. 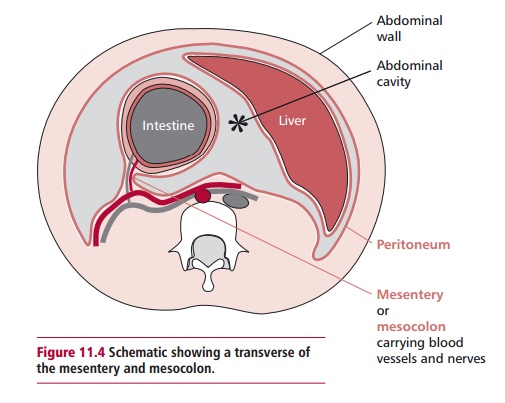 The large reserve capacity of the liver means that it needs only 10–20% of its tissues to be functioning to sustain life. It also has a remarkable ability to regenerate itself after its tissue has been removed or destroyed by dis-ease. Complete destruction or removal of the liver results in death within 10 h, hence liver disease with loss of function is a serious matter. The liver has numerous functions. It acts as an interface between theGIT and the rest of the body tissues because the hepatic portal vein car-ries blood directly to it from the GIT. Hence it is able to regulate the post-hepatic blood concentrations of many of the nutrients absorbed by the GIT. Similarly, the liver also regulates the concentrations of many biomolecules produced by the body, for example steroid hormones, and deals with many toxins, such as drugs, pesticides and carcinogens, to render them less harm-ful and solubilizes them for excretion . The liver also produces many of the plasma proteins including albumin and the clotting factors . Bile produced by the hepatocytes is secreted into bile canal-iculi and eventually drains into the bile duct. About 700–1200 cm3 of bile are produced daily and stored and concentrated in a hollow organ called the gall bladder (Figure 11.1 (A) and (B)) prior to its release in the small intestine. Bile does not contain enzymes, but it does contain bile salts, for example sodium glycocholate and taurocholate. These are detergents that aid in the digestion of lipids by emulsifying them to form water-soluble complexes.

Bile pigments are derived from heme which results from the destruction of old erythrocytes . In the spleen (Figure 11.1 (A) and (B)), destruction of red blood cells releases hemoglobin, which is then cata-bolized to free heme and globin. The latter is degraded to amino acids. Bilirubin is derived from heme, the iron-containing protoporphyrin ring of hemoglobin. A typical adult produces around 450 µmol of bilirubin per day. This bilirubin is referred to as unconjugated bilirubin. It is insoluble in water and is transported in the plasma bound to albumin to be taken up by hepatocytes. Here, it is conjugated with glucuronic acid by UDP-glucuronyltransferase to form mono- and diglucuronides in a manner resembling the detoxification reactions described. Conjugated bilirubin is much more water soluble than its unconjugated form and is secreted into the bile duct. In the small intestine, conjugated bilirubin is a substrate for bacteria that convert it to urobilinogen and stercobilin. Most stercobilin is excreted in feces, although some urobilinogen is absorbed and taken to the liver in the hepatic portal vein and re-excreted in bile or by the kidneys (Figure 11.5). 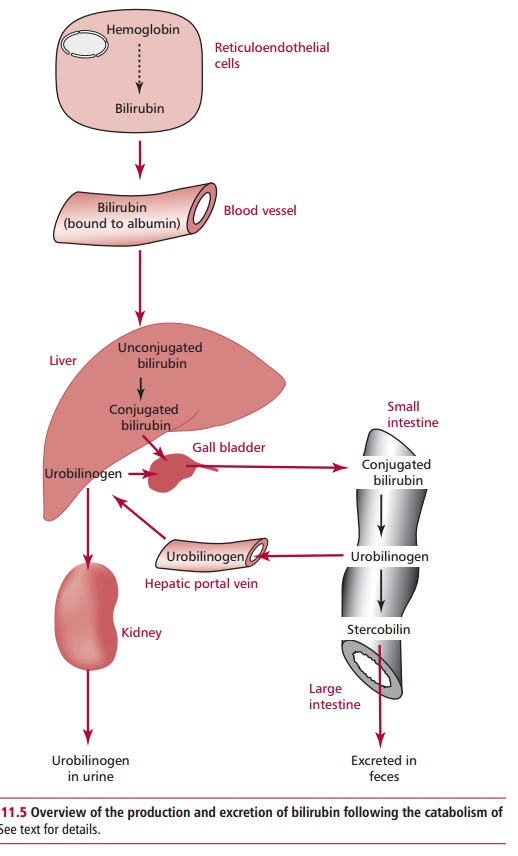