Disorders of the Small Intestine

DISORDERS OF THE SMALL INTESTINE

Lactose intolerance is a condition arising from an inability to express lactase. It is divided into three categories: congenital alactasia, primary acquired and secondary acquired lactose intolerance. Congenital alactasia or hypolactasia is an extremely rare condition and affected babies do not gain weight, are dehydrated and extremely unwell. Human milk is unsuitable for the baby and breastfeeding is precluded, which can also cause emotional distress in some mothers. These babies must be fed dairy-based but lactose-free or lactose-free soya formulae to survive. Primary acquired lactose intolerance usually occurs following weaning and before the age of six years and is the normal condi-tion for approximately 70% of the world’s population, the major exception being northern Europeans. It is particularly common in Asian communities and amongst blacks of African origin. Secondary acquired lactose intolerance occurs as a result of damage to the small intestinal mucosa, for example due to gastroenteritis, cows milk protein intolerance or celiac disease (see below).

Patients who ingest milk suffer from serious indigestion, nausea and gas, cramps, bloating and diarrhea because of the action of GIT bacteria on ingested lactose, the severity varying with the amount of lactose consumed and the tolerance level of the individual. These rather diffuse symptoms are often associated with other conditions of the GIT, such as infections with parasitic helminths and the protozoan Giardia , inflammatory conditions, for example ulcerative colitis (see below), hormonal complaints, such as hypo- and hyperthyroidism and cancer of the colon and rectum . Lactose intolerant patients are able to ingest a variety of milk products such as cheese, where the lactose has been removed in the whey, and yoghurt, where it has been fermented to lactate. 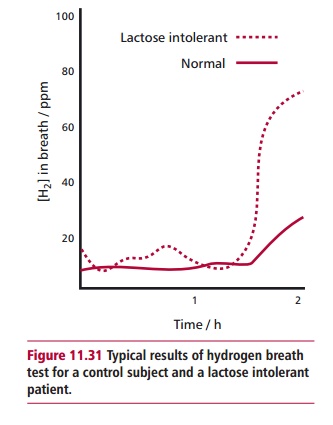 Lactase deficiency can be assessed by the hydrogen breath, stool acidity and lactose tolerance tests. An assay for lactase activity on a tissue sample following a biopsy of the intestinal mucosa would confirm any diagnosis. The hydrogen breath test requires the patient to drink a solution containing 50 g of lactose. If lactase is deficient, the sugar is fermented by colonic bacteria which subsequently produce dihydrogen, some of which will enter the blood and be excreted at the lung surface. Regular analyses of the breath will show the increasing amounts of hydrogen (Figure 11.31) in lactose intolerance. Using the appropriate sugars allows both these tests to be used in diagnosing other disaccharide intolerances, although genetic intolerances to these are rather rare. The principle of the stool acidity test is simple: undigested lactose fermented by bacteria in the colon produces lactate and fatty acids, which can then be detected in a stool sample. The lactose tolerance test is still per- formed but only when other tests are inconclusive since it is more invasive. The patient is required to fast overnight, then drink a solution containing 50 g lactose. Several blood samples are taken over a 2-h period and their glucose concentrations determined. The amount of blood glucose indicates how well the patient is able to digest lactose. The test must be controlled by repeating the procedure using 25 g each of glucose and galactose, the constituent mono-saccharides of lactose. 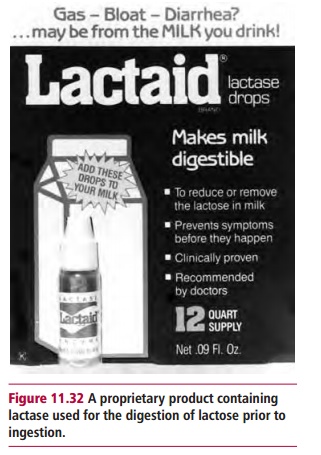 The medical history, age, degree of intolerance and overall health of the patient determine treatment for lactose intolerance. In general, it can be controlled with an appropriate diet. Adding proprietary products containing lactase (Figure 11.32) isolated from microorganisms to dairy products prior to ingestion can also help overcome the problem.

Celiac disease is a genetically determined chronic inflammatory condition affecting the small intestine and is induced by the ingestion of wheat pro-tein, specifically gluten, and its products. A portion of the gluten molecule forms an autoimmune complex in the GIT mucosa which stimulates T cells to aggregate and release toxins that promote lysis of enterocytes. This leads to a progressive atrophy and characteristic flattening ofthe mucosal villi and microvilli in the upper part of the small intestine (Figure11.33 (A) and (B)). Celiac disease is a relatively common disorder with aworldwide prevalence of 1 in 200–300. The mucosa improves morphologically when the patient is placed on a gluten-free diet but relapses occur if gluten is reintroduced in the diet. Celiac disease is accompanied by malabsorption of nutrients due to a decreased surface area over which absorption can take place. The signs and symptoms of celiac disease are surprisingly diverse and include abdominal pain, chronic diarrhea, weight loss, bone pain, fatigue and anemia. Celiac disease is diagnosed by demonstrating villous atrophy in a small intestine biopsy (Figure 11.34 (A) and (B)) and by improvements in clini-cal symptoms or histological tests following restriction to a gluten-free diet. Gluten-free foods are now readily available in supermarkets and health food stores. The management of celiac disease involves adherence to a gluten-free diet, which in most cases helps relieve the symptoms and allows the existing mucosal damage to heal as well as preventing further damage. 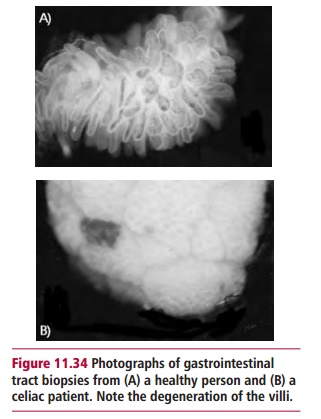 Malabsorption is a reduction in the absorption of one or more nutrients by the small intestine. It occurs as a result of a wide range of disorders that affect the GIT, pancreas, liver and gall bladder. Its causes include enzyme deficiencies, such as in lactose intolerance, chronic pancreatitis, bile salt deficiency, as in biliary obstruction or hepatitis, and intestinal diseases such as celiac disease and Crohn’s disease (see below). The clinical features of malabsorption (Figure11.35) arise because of deficiency of one or more nutrients and include anemiadue to iron, folate and vitamin B12 deficiencies, osteomalacia due to vitamin D deficiency, edema due to hypoalbuminemia, the tendency to bleeding when vitamin K is suboptimal and generalized weight loss. Malabsorption results in retention of nutrients in the GIT lumen causing diarrhea and abdominal dis-comfort due to the action of GIT bacteria. Malabsorption of fats leads to their losses in amounts greater than 5 g daily and causes steatorrhea. The feces are greasy, with a pale color and have an offensive smell. 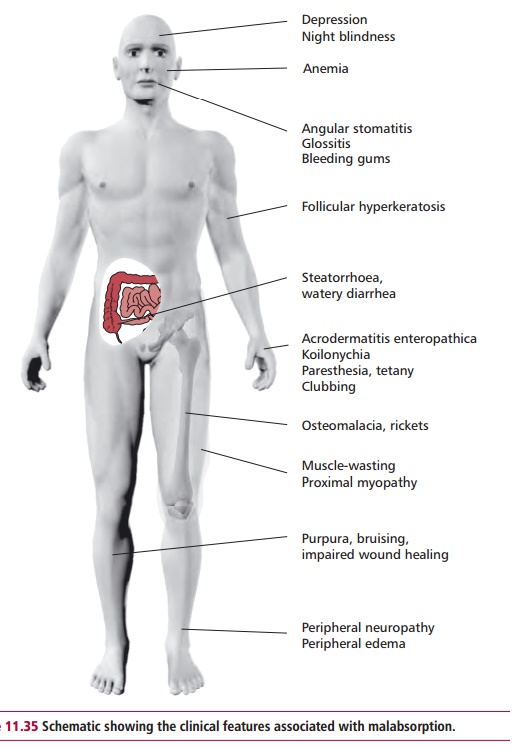 A diseased liver may be unable to synthesize bile which is required for diges-tion of fats and if absent can lead to malabsorption. Liver function tests can indicate the presence of liver disease and a number of blood tests are also use-ful in assessing liver function. These include determining the concentration of albumin in the plasma and hematological investigations such as full blood count, iron, vitamin B12 and folate and can indicate the type of malabsorption. Investigations of malabsorption also include microbiological examination of feces to identify any pathogens present. The pentose sugar xylose is absorbed in the small intestine but is not metabolized and is excreted unchanged in the urine.

This property is exploited in the xylose absorption test to assess the malabsorption of carbohydrates. The patient fasts overnight, empties the bladder and drinks a 500 cm3 solution containing 5 g xylose. In normal indi-viduals, the serum xylose concentration increases above 1.3 mmol dm–3 one hour after the test. After 5 h, the concentration of xylose in the urine increases to more than 7.0 mmol dm–3. Significantly lower concentrations of xylose occur in the serum of patients with carbohydrate malabsorption. However, care must be exercised since some bacteria colonizing the small intestine are capable of metabolizing xylose and a number of renal diseases can also lead to reduced concentrations.

Malabsorption of fat can occur in a number of pancreatic and intestinal dis-orders. Bacteria colonizing the small intestine may break down bile acids, reducing their effective concentration and causing malabsorption. A fecal fat test can assess fat malabsorption. The test involves collecting feces over a period of three days after which their fat content is assessed chemically. Normally, up to 5 g of fat is lost in the feces each day but more is lost during malabsorption giving rise to steatorrhea.

Crohn’s disease is a chronic inflammation, usually of the ileum, although it can affect any part of the GIT. The inflammation tends to be patchy but extends throughout the layers of the intestinal wall thickening the wall and narrowing the lumen. The cause of Crohn’s disease is unclear although viruses and bacteria have been implicated. Patients with Crohn’s disease suffer from lack of appetite, abdominal pain, diarrhea and weight loss. A biopsy of the GIT is used to detect the characteristic changes associated with Crohn’s disease. Treatment involves using anti-inflammatory drugs, such as 5-aminosalicylic acid, although surgery may be required in severe cases.