Absorption of the Products of Digestion

The large surface area of the small intestine allows the rapid absorption of the products of digestion.

ABSORPTION OF THE PRODUCTS OF DIGESTION

The large surface area of the small intestine allows the rapid absorption of the products of digestion. The enzymes concerned with the final stages of diges-tion of a number of nutrients are located in the brush border of the entero-cytes as described or even within their cytoplasm. This ensures that the final products of digestion are produced near or within the absorp-tive surface of the GIT. Enterocytes are joined together by tight junctions that ensure material cannot leak from the lumen. Absorption by enterocytes is largely active and selective and they have a high metabolic rate because the transport of materials across their membranes requires considerable amounts of metabolic energy. A membrane-bound Na+/K+-ATPase uses a major pro-portion of this energy to catalyze the hydrolysis of ATP in the presence of Na+ and K+. The free energy from the hydrolysis is used to expel three Na+ from the cell and to pump two K+ into the cell. This may be summarized as:

Since both Na+ and K+ are being transported against their electrochemical gradients both movements are an active transport. Also, since more positive charges are being pumped out of the cell than are entering it, the effect con-tributes to the potential difference across the membrane, called the resting membrane potential, of about –60 mV, the inside of the cell being negative with respect to the outside. The membrane potential of the apical membrane of the enterocyte can be harnessed to facilitate the uptake of a variety of nutri-ents from the lumen of the GIT. Both amino acids and monosaccharides are transported across the enterocyte luminal membrane in a Na+-dependent fashion. A variety of different membrane transporter proteins are responsible for the absorption of specific sugars and different groups of amino acids. 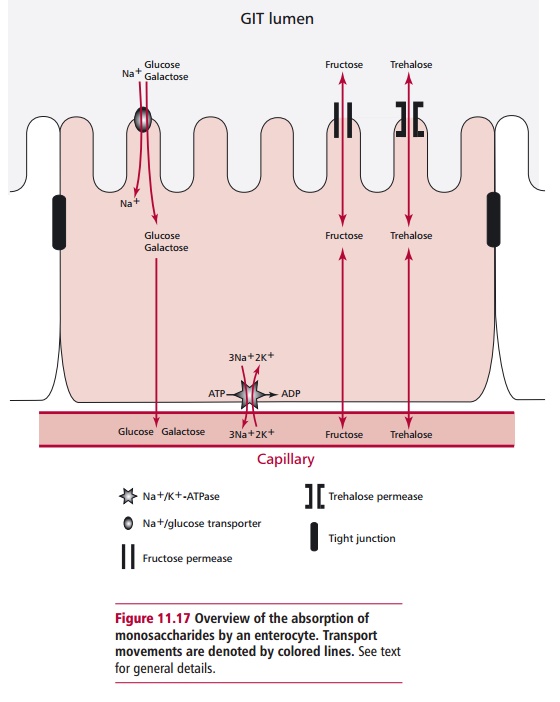 Glucose and galactose are transported across the enterocyte luminal mem-brane in an active, Na+-dependent fashion by the same transporter. One mol-ecule of these sugars can only move through the transporter into the cell if Na+ ions move in at the same time (Figure 11.17). The concentrations of the sugars can build up within the cytoplasm, such that they are able to leave the cell through the basolateral membrane by facilitated diffusion. Other mono-saccharides, for example fructose and trehalose, are absorbed only by facili-tated diffusion and are absorbed to a much lesser extent.

The major initial products of protein digestion are small peptides and these are absorbed by enterocytes of the jejunum at their luminal surfaces by pep-tide transporter protein, called the PepT1 (Figure 11.18). This occurs in a H+-dependent fashion that resembles the uptake of glucose and galactose. Within the cytoplasm, the peptides are hydrolyzed to amino acids, ensuring a con-tinuous sink is present to facilitate peptide uptake by the cells. The exit of the amino acids from the cells on the basolateral side also occurs down their con-centration gradients. However, as peptides are moved further along the GIT, they are hydrolyzed by peptidases to free amino acids and their absorption occurs in the ileum using a number of Na+-dependent transporters (Figure11.18), which have specificities for different amino acid side chains. Peptides 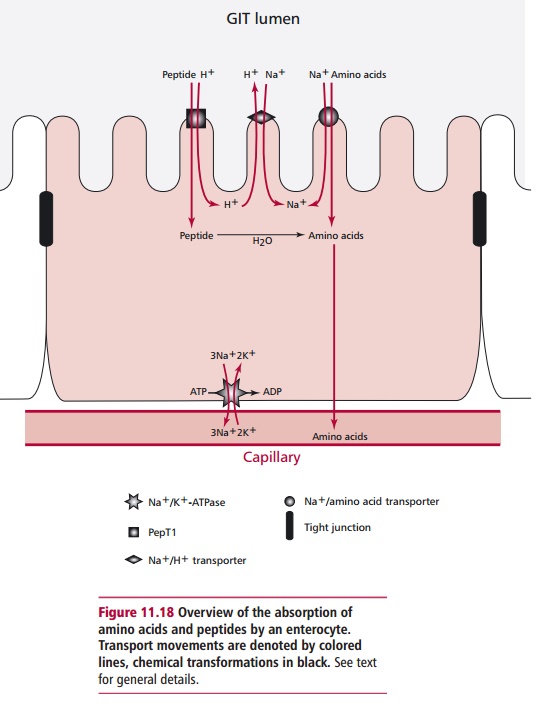 can also be absorbed by a paracellular route where they pass between entero-cytes, rather than being absorbed across the luminal surface. Relatively large peptides can be absorbed by this method and may initiate an allergic reaction leading to food allergies.

Digestion of RNA produces nucleotides that are further degraded to nucle-osides at the brush border and which, again, are absorbed in a Na+-dependent manner. Catabolism within the cytoplasm converts the nucleotides to ribose phosphate and bases. Eventually the purine bases are converted to urate and the pyrimidines to uracil as shown in Figure 11.19. 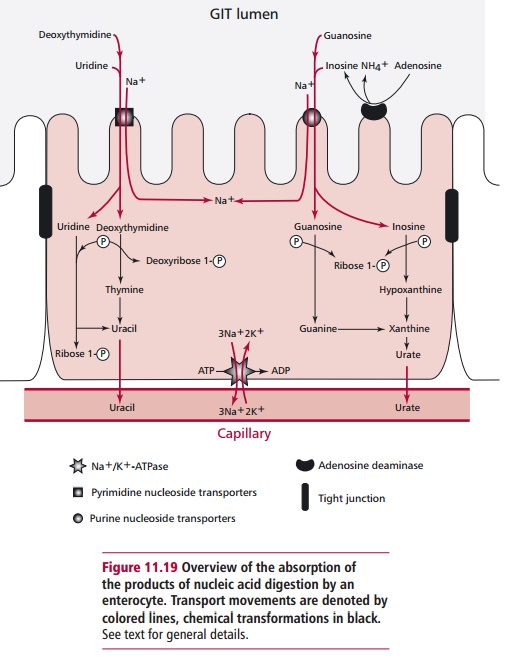 Fatty acids, monoacylglycerols, monoacylphospholipids and cholesterol are absorbed as mixed micelles by the brush border of the enterocytes (Figure11.20). The triacylglycerols and phospholipids are reformed within the ente-rocyte cytoplasm and packaged into large lipoprotein complexes called chy-lomicrons that are transported from the GIT in lacteals of thelymphatic system. This ensures the lipids bypass the liver and are delivered to the blood through the thoracic duct.

Water-soluble vitamins are taken up by enterocytes by a variety of mecha-nisms. Vitamins B1 (thiamin) and B2 (riboflavin) are absorbed in the upper portion of the small intestine. Thiamin is actively transferred to the portal system. Specific transporter proteins actively accumulate niacin (nicotinic acid and nicotinamide), folic acid and biotin (vitamin H) in Na+-dependent fashions. Pantothenic acid and the vitamers of vitamin B6 are absorbed by diffusion. Vitamin C is absorbed in the jejunum by a Na+-dependent mecha-nism, similar to that described for glucose. The fat-soluble vitamins, A, D, E and K, are absorbed within the mixed micelles of fatty acids, monoacylglyc- 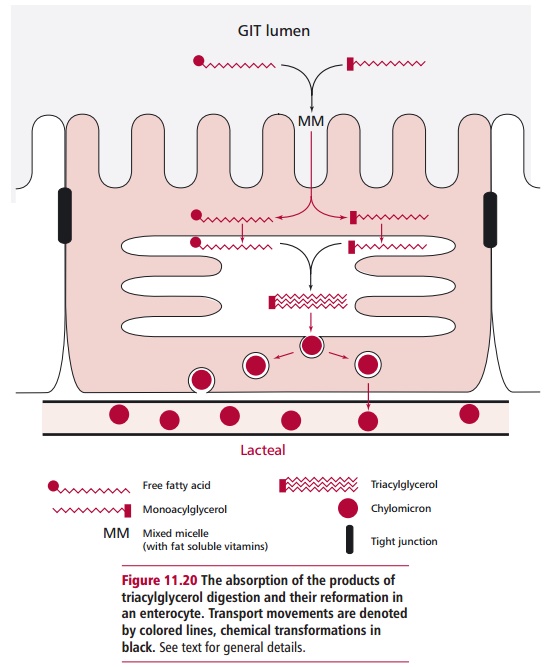 erols, monoacylphospholipids and cholesterol described above (Figure 11.20) and leave the enterocyte in the chylomicrons. For these reasons, a deficiency in dietary lipids means that the absorption of fat-soluble vitamins is greatly reduced. 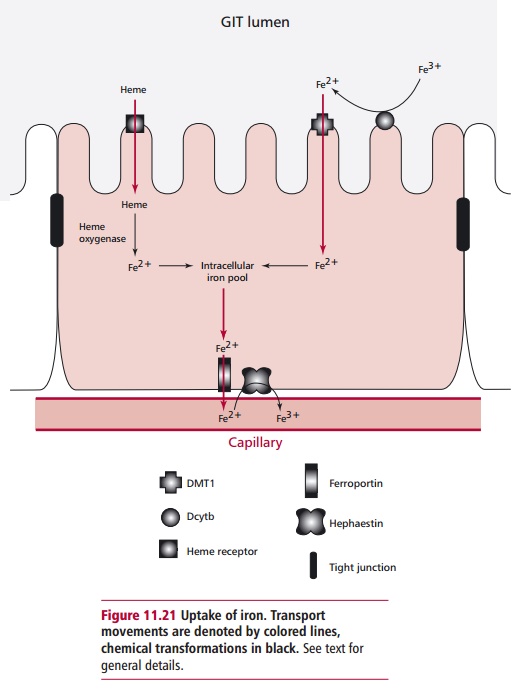 Many minerals are absorbed in an energy dependent fashion along the length of the GIT, although Ca2+ and iron are mainly absorbed in the duodenum. Dietary iron occurs in nonheme and heme forms and their absorption by duodenal enterocytes is by different mechanisms. Dietary nonheme iron occurs in ferrous (Fe(II)2+) and ferric (Fe(III)3+) forms. Ferrous iron is solu-ble up to a pH of about 7 but the predominant form, ferric iron, is sparingly soluble above pH 3 and is not available for absorption and must be reduced before it can be transported across the intestinal epithelium. A ferrireductase called Dcytb bound to the brush border of enterocytes reduces ferric iron to the ferrous form. Ferrous iron is then transported into the cell by a H+ coupled mechanism as illustrated in Figure 11.21. The transporter, called the divalent metal transporter 1 (DMT1), is also able to effect the absorption of a number of other divalent metal ions, such as those of cadmium, cobalt copper, lead, nickel and zinc. Heme iron is absorbed into the enterocyte by a heme receptor and, once internalized, its ferrous iron is released into the intracellular pool by heme oxygenase activity (Figure 11.21). Ferrous iron is exported from the enterocyte across the basal membrane by a membrane protein called ferro-portin1 or Ireg1. It is then oxidized by hephaestin, a transmembrane copper dependent ferroxidase, which is necessary for effective iron transport. The ferric iron is bound by transferrin in the plasma and can be stored in erythro-cytes in ferritin molecules .

Calcium is absorbed in the upper part of the small intestine in an ionic form. This absorption requires the active metabolite of vitamin D, 1,25-dihydroxy-vitamin D3, and is inhibited by substances that form insoluble calcium salts, such as phosphate and oxalate. The uptake of Na+ has been mentioned already in relation to the active uptake of several nutrients and many anions, hydro-gen carbonate, chloride and iodide, can passively follow it into enterocytes. Phosphate is actively accumulated by enterocytes.

Amino acids, monosaccharides, urate and uracil, B vitamins, vitamin C and minerals all leave the enterocytes through their basolateral membranes, enter the hepatic portal vein and are delivered to the liver. Following their absorption, many minerals are bound by intracellular proteins before being expelled through the basolateral membrane into the bloodstream where they 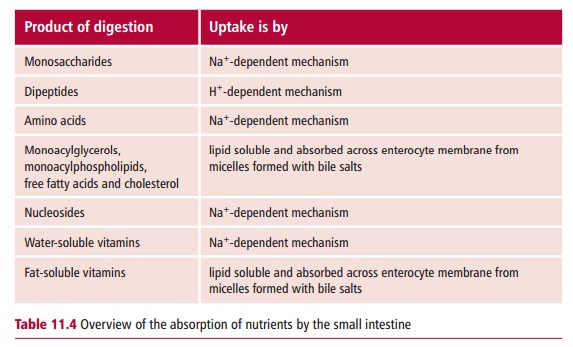 are bound by transport proteins, such as transferrin for iron (Figure 13.4) and ceruloplasmin for copper. Table 11.4 summarizes the mechanisms of absorp-tion of the major nutrients.

Approximately 9 dm3 of fluid pass through the GIT each day. Reabsorption of water from the GIT is essential to prevent dehydration. Most, about 95%, is absorbed by the small intestine, 4% by the large intestine and only 1% is lost from the GIT.