Disorders of the Exocrine Pancreas

Acute pancreatitis is a severe, rapid inflammation of the pancreas with varying degrees of edema , hemorrhage and tissue necrosis.

DISORDERS OF THE GIT AND ACCESSORY ORGANS

DISORDERS OF THE EXOCRINE PANCREAS

Acute pancreatitis is a severe, rapid inflammation of the pancreas with varying degrees of edema , hemorrhage and tissue necrosis. It arises because of an inappropriate activation of pancreatic enzymes which then autodigest pancreatic tissue. Normally, these enzymes are inactive until they reach the duodenum. The cause of acutepancreatitis is unclear, although excessive alcohol intake is believed to have a major role, but viral infections, drug reactions and pancreatic cancer have also been implicated. The clinical features of acute pancreatitis include attacks of severe abdominal pain that may extend to the back, vomiting, fever and shock. The leakage of pancreatic enzymes into the bloodstream from damaged tissue and a demonstration of increased plasma amylase activity aids in diagnosis. Typically, there is a five-fold rise in plasma amylase activity over the first two days of an attack that returns to normal within three to five days. Treatment is symptomatic and aimed at maintaining circulation and fluid volume and decreasing pain with analgesics.

A number of tests are available to assess pancreatic function. The most widely used is the fluorescein dilaurate test which indirectly assesses the activity of pancreatic enzymes. The patient is given an oral dose of the synthetic ester, fluorescein dilaurate, that is hydrolyzed to release fluorescein by pancreatic cholesterol esterase. Fluorescein, but not fluorescein dilaurate, is absorbed by the small intestine and transported to the liver where it is converted to fluorescein glucuronide, which is then excreted in the urine. The latter can be detected by its characteristic fluorescence. The test is controlled for vari-ations in intestinal absorption, hepatic conjugation and renal excretion by repeating the test the next day but using an oral dose of fluorescein. The ratio of fluorescein excreted after administration of fluorescein dilaurate to that excreted after administration of free fluorescein is greater than 0.3 in normal individuals. However, a ratio less than 0.2 is indicative of abnormal pancreatic function. Ratios between 0.2 and 0.3 are inconclusive. Other investigations of pancreatic function include the para-aminobenzoic acid (PABA) test in which the patient is given 0.5 g of the synthetic peptide, benzoyltyrosylami-nobenzoic acid (BTPABA). This is hydrolyzed to PABA in the small intestine by pancreatic chymotrypsin (Figure 11.24). Following its absorption, the PABA is excreted unchanged in the urine. The patient is also given a known amount of radioactively labeled PABA (14C-PABA) to correct for variations in the absorp-tion, metabolism and excretion of PABA formed from BTPABA. The amount of PABA found in the urine is a measure of the activity of pancreatic chymo-trypsin. There is reduced excretion of urinary PABA in individuals with abnor-mal pancreatic function. 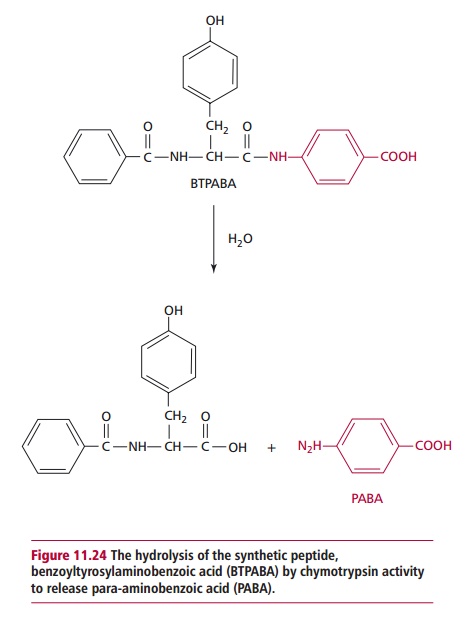