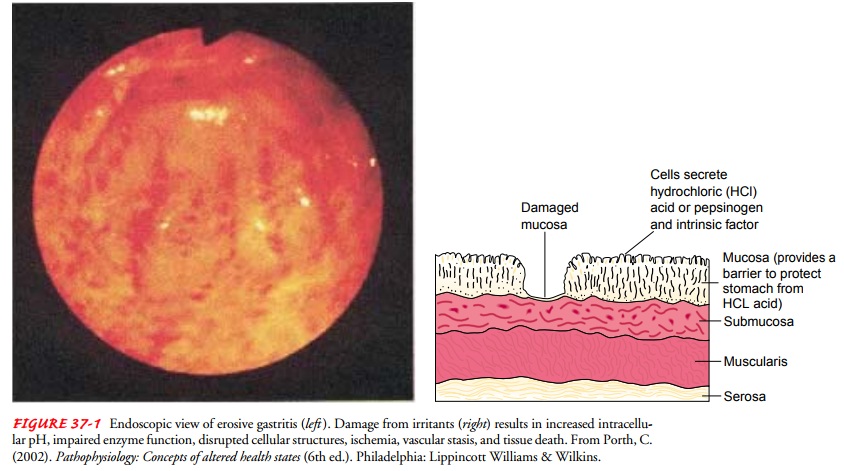 Gastritis (inflammation of the gastric or stomach mucosa) is a com-mon GI problem.

Gastritis (inflammation of the gastric or stomach mucosa) is a com-mon GI problem. Gastritis may be acute, lasting several hours to a few days, or chronic, resulting from repeated exposure to irritating agents or recurring episodes of acute gastritis. Acute gastritis is often caused by dietary indiscretion—the person eats food that is contaminated with disease-causing microorganisms or that is irritating or too highly seasoned. Other causes of acute gastritis include overuse of aspirin and other nonsteroidal anti-inflammatory drugs (NSAIDs), excessive alcohol intake, bile reflux, and radiation therapy. A more severe form of acute gastritis is caused by the ingestion of strong acid or alkali, which may cause the mucosa to become gangrenous or to perforate. Scarring can occur, resulting in pyloric obstruction. Gastritis also may be the first sign of an acute systemic infection.

Chronic gastritis and prolonged inflammation of the stomach may be caused by either benign or malignant ulcers of the stomach or by the bacteria Helicobacter pylori. Chronic gastritis is sometimes associated with autoimmune diseases such as pernicious anemia; dietary factors such as caffeine; the use of medications, especially NSAIDs; alcohol; smoking; or reflux of intestinal contents into the stomach.

In gastritis, the gastric mucous membrane becomes edematous and hyperemic (congested with fluid and blood) and undergoes superficial erosion (Fig. 37-1). It secretes a scanty amount of gastric juice, containing very little acid but much mucus. Superficial ulceration may occur and can lead to hemorrhage. 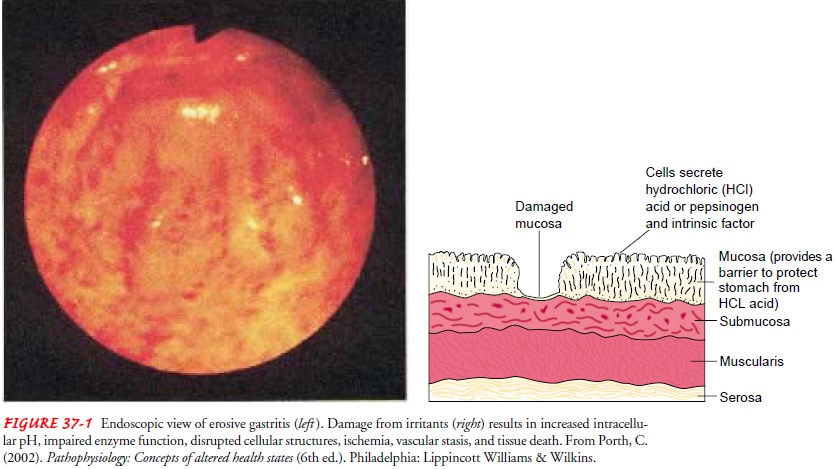 The patient with acute gastritis may have abdominal discomfort, headache, lassitude, nausea, anorexia, vomiting, and hiccupping. Some patients, however, have no symptoms. The patient with chronic gastritis may complain of anorexia, heartburn after eating, belching, a sour taste in the mouth, or nausea and vomiting. Patients with chronic gastritis from vitamin deficiency usually have evidence of malabsorption of vitamin B12 caused by antibodies against intrinsic factor

Gastritis is sometimes associated with achlorhydria or hypochlorhydria (absence or low levels of hydrochloric acid [HCl]) or with hyperchlorhydria (high levels of HCl). Diagnosis can be determined by endoscopy, upper GI radiographic studies, and histologic examination of a tissue specimen obtained by biopsy. In addition to biopsy, other diagnostic measures for detecting H. pylori include serologic testing for antibodies against the H. pylori antigen, a 1-minute ultrarapid urease test, and a breath test.

The gastric mucosa is capable of repairing itself after a bout of gastritis. As a rule, the patient recovers in about 1 day, although the appetite may be diminished for an additional 2 or 3 days. Acute gastritis is also managed by instructing the patient to refrain from alcohol and food until symptoms subside. After the patient can take nourishment by mouth, a nonirritating diet is recommended. If the symptoms persist, fluids may need to be administered parenterally. If bleeding is present, management is similar to the procedures used for upper GI tract hemorrhage.

If gastritis is caused by ingestion of strong acids or alkalis, treatment consists of diluting and neutralizing the offending agent. To neutralize acids, common antacids (eg, aluminum hydroxide) are used; to neutralize an alkali, diluted lemon juice or diluted vinegar is used. If corrosion is extensive or severe, emetics and lavage are avoided because of the danger of perforation and damage to the esophagus.Therapy is supportive and may include nasogastric (NG) intubation, analgesic agents and sedatives, antacids, and intravenous (IV) fluids. Fiberoptic endoscopy may be necessary. In extreme cases, emergency surgery may be required to remove gangrenous or perforated tissue. Gastrojejunostomy or gastric resection may be necessary to treat pyloric obstruction, a narrowing of the pyloric orifice. 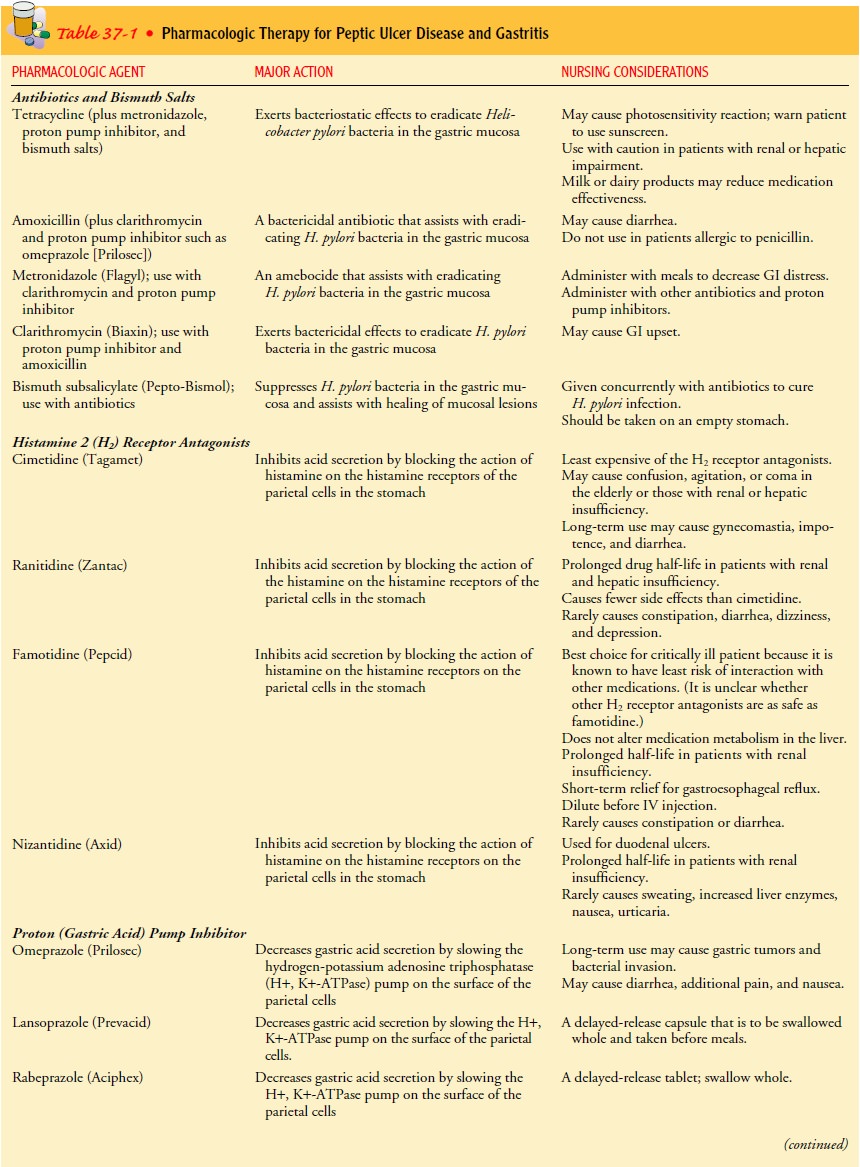