NAVSTAR GPS is a one-way ranging system i.e. signals are only transmitted by the satellite. Signal travel time between the satellite and the receiver is observed and the range distance is calculated through the knowledge of signal propagation velocity.

NAVSTAR GPS is a one-way ranging system i.e. signals are only transmitted by the satellite. Signal travel time between the satellite and the receiver is observed and the range distance is calculated through the knowledge of signal propagation velocity. One way ranging means that a clock reading at the transmitted antenna is compared with a clock reading at the receiver antenna. But since the two clocks are not strictly synchronized, the observed signal travel time is biased with systematic synchronization error. Biased ranges are known as pseudoranges. Simultaneous observations of four pseudoranges are necessary to determine X, Y, Z coordinates of user antenna and clock bias.

Real time positioning through  GPS signals is possible by modulating carrier frequency with Pseudorandom Noise (PRN) codes. These are sequence of binary values (zeros and ones or +1 and -1) having random character but identifiable distinctly. Thus pseudoranges are derived from travel time of an identified PRN signal code. Two different codes viz. P-code and C/A code are in use. P means precision or protected and C/A means clear/acquisition or coarse acquisition.

P- code has a frequency of 10.23 MHz. This refers to a sequence of 10.23 million binary digits or chips per second. This frequency is also referred to as the chipping rate of P-code. Wavelength corresponding to one chip is 29.30m. The P-code sequence is extremely long and repeats only after 266 days. Portions of seven days each are assigned to the various satellites. As a consequence, all satellite can transmit on the same frequency and can be identified by their unique one-week segment. This technique is also called as Code Division Multiple Access (CDMA). P-code is the primary code for navigation and is available on carrier frequencies L1 and L2.

The C/A code has a length of only one millisecond; its chipping rate is 1.023 MHz with corresponding wavelength of 300 meters. C/A code is only transmitted on L1 carrier.

GPS receiver normally has a copy of the code sequence for determining the signal propagation time. This code sequence is phase-shifted in time step- by-step and correlated with the received code signal until maximum correlation is achieved. The necessary phase-shift in the two sequences of codes is a measure of the signal travel time between the satellite and the receiver antennas. This technique can be explained as code phase observation.

For precise geodetic applications, the pseudoranges should be derived from phase measurements on the carrier signals because of much higher resolution. Problems of ambiguity determination are vital for such observations.

The third type of signal transmitted from a GPS satellite is the broadcast message sent at a rather slow rate of 50 bits per second (50 bps) and repeated every 30 seconds. Chip sequence of P-code and C/A code are separately combined with the stream of message bit by binary addition ie the same value for code and message chip gives 0 and different values result in 1.

The main features of all three signal types used in GPS observation viz carrier, code and data signals are given in Table 3. 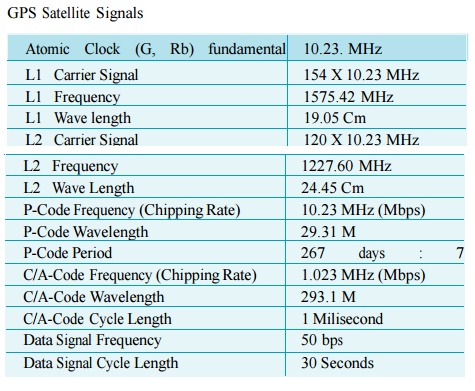 The signal structure permits both the phase and the phase shift (Doppler effect) to be measured along with the direct signal propagation. The necessary bandwidth is achieved by phase modulation of the PRN code as illustrated in Fig. 6. 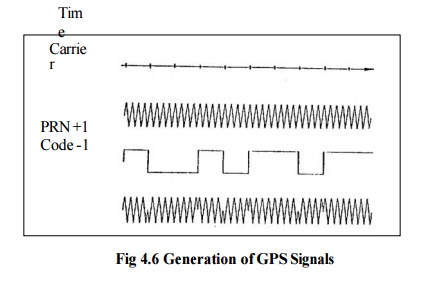