GPS receivers can be divided into various groups according to different criteria. In the early stages two basic technologies were used as the classification criteria viz. Code correlation receiver technology and sequencing receiver technology, which were equivalent to code dependent receivers and code free receivers. However, this kind of division is no longer justifiable since both techniques are implemented in present receivers.

Based on technical realization of channel, the GPS receivers can be classified

GPS receivers are even classified on the purpose as:

For geodetic application it is essential to use the carrier phase data as observable. Use of L1 and L2 frequency is also essential along with P-code.

GPS receiver market is developing and expanding at a very high speed. Receivers are becoming powerful, cheap and smaller in size. It is not possible to give details of every make but description of some typical receivers given may be regarded as a basis for the evaluation of future search and study of GPS receivers.

T1 4100 GPS Navigator was manufactured by Texas Instrument in 1984. It was the first GPS receiver to provide C/A and P code and L1 and L2 carrier phase observations. It is a dual frequency multiplexing receiver and suitable for geodesist, surveyor and navigators. The observables through it are:

The data are recorded by an external tape recorder on digital cassettes or are downloaded directly to an external microprocessor. A hand held control display unit (CDU) is used for communication between observer and the receiver. For navigational purposes the built in microprocessor provides position and velocity in real time every three seconds. T1 4100 is a bulky instrument weighing about 33 kg and can be packed in two transportation cases. It consumes 90 watts energy in operating mode of 22V - 32V. Generator use is recommended. The observation noise in P-Code is between 0.6 to 1 m, in C/ A code it ranges between 6 to 10 m and for carrier phase it is between 2 to 3 m.

T1 4100 has been widely used in numerous scientific and applied GPS projects and is still in use. The main disadvantages of the T1 4100 compared to more modern GPS equipment's are

Sensitivity of its antenna for multipath and phase centre variation if two receivers are connected to one antenna and tracking of seven satellites simultaneously is possible. For long distances and in scientific projects, T1 4100 is still regarded useful. However, due to imposition of restriction on P- code for civilian, T1 4100 during Anti Spoofing (AS) activation can only be used as a single frequency C/A code receiver.

The MACROMETER V 1000, a code free GPS receiver was introduced in 1982 and was the first receiver for geodetic applications. Precise results obtained through it has demonstrated the potential of highly accurate GPS phase observations. It is a single frequency receiver and tracks 6 satellites on 6 parallel channels. The complete system consists of three units viz.

The processor is essential for providing the almanac data because the Macrometer V 1000 cannot decode the satellite messages and process the data. At pre determined epoches the phase differences between the received carrier signal and a reference signal from receiver oscillator is measured. A typical baseline accuracy reported for upto 100 km distance is about 1 to 2 ppm (Parts per million).

Macrometer II, a dual frequency version was introduced in 1985. Though it is comparable to Macrometer V 1000, its power consumption and weight are much less. Both systems require external ephemeredes. Hence specialized operators of few companies are capable of using it and it is required to synchronize the clock of all the instruments proposed to be used for a particular observation session. To overcome above disadvantages, the dual frequency Macrometer II was further miniaturized and combined with a single frequency C/A code receiver with a brand name MINIMAC in 1986, thus becoming a code dependent receiver.

The dual frequency WM 102 was marketed in 1988 with following key features:

The observations can be recorded on built in data cassettes or can be transferred on line to an external data logger in RS 232 or RS 422 interface. Communication between operator and receiver is established by alpha numerical control panel and display WM 101/102 has a large variety of receiver resident menu driven options and it is accompanied by comprehensive post processing software.

In 1991, WILD GPS system 200 was introduced. Its hardware comprises the Magnavox SR 299 dual frequency GPS sensor, the hand held CR 233 GPS controller and a Nicd battery. Plug in memory cards provide the recording medium. It can track 9 satellites simultaneously on L1 and L2. Reconstruction of carrier phase on L1 is through C/A code and on L2 through P-code. The receiver automatically switches to codeless L2 when P-code is encrypted. It consumes 8.5 watt through 12-volt power supply.

Observation noise of the carrier phase measurement when P-code is available is about ń 0-2mm and of the P-code pseudoranges as low as ń 2cm. Therefore, it is very suitable for fast ambiguity solution techniques with code/ carrier combinations.

ASHTECH (Sunnyvale, California) developed a GPS receiver with 12 parallel channels and pioneered current multi-channel technology. ASHTECH XII GPS receiver was introduced in 1988. It is capable of measuring pseudoranges, carrier phase and integrated dopler of up to 12 satellites on L1. The pseudoranges measurement are smoothed with integrated Doppler. Postion velociy, time and navigation informations are displayed on a keyboard with a 40-characters display. L2 option adds 12 physical L2 squaring type channels.

ASHTECH XII GPS receiver is a most advanced system, easy to handle and does not require initialization procedures. Measurements of all satellites in view are carried out automatically. Data can be stored in the internal solid plate memory of 5 Mbytes capacity. The minimum sampling interval is 0.5 seconds. Like many other receivers it has following additional options viz.

In 1991, ASHTECH P-12 GPS receiver was marketed. It has 12 dedicated channels of L1, P-code and carrier and 12 dedicated channels of L2, P-code and carrier. It also has 12 L1, C/A code and carrier channels and 12 code less squaring L2 channels. Thus the receiver contains 48 channels and provides all possibilities of observations to all visible satellites. The signal to noise level for phase measurement on L2 is only slightly less than on L1 and significantly better than with code-less techniques. In cases of activated P-code encryption, the code less L2 option can be used.

TURBO ROGUE SNR-8000 is a portable receiver weighing around 4 kg, consumes 15-watt energy and is suitable for field use. It has 8 parallel channels on L1 and L2. It provides code and phase data on both frequencies and has a codeless option. Full P-code tracking provides highest precision phase and pseudo rages measurements, codeless tracking is automatic 'full back' mode. The code less mode uses the fact that each carrier has identical modulation of P-code/Y-code and hence the L1 signal can be cross-correlated with the L2 signal. Results are the differential phase measurement (L1-L2) and the group delay measurement (P1-P2)

One of the important features is that less than 1 cycle slip is expected for 100 satellite hours.

Navigation receivers are rapidly picking up the market. In most cases a single C/A code sequencing or multiplexing channel is used. However, modules with four or five parallel channels are becoming increasingly popular. Position and velocity are derived from C/A code pseudoranges measurement and are displayed or downloaded to a personal computer. Usually neither raw data nor carrier phase information is available. Differential navigation is possible with some advanced models.

MAGELLAN NAV 1000 is a handheld GPS receiver and weighs only 850 grams. It was introduced in 1989 and later in 1990, NAV 1000 PRO model was launched. It is a single channel receiver and tracks 3 to 4 satellites with a

The follow up model in 1991 was NAV 5000 PRO. It is a 5-channel receiver tracking all visible satellites with a 1-second update rate. Differential navigation is possible. Carrier phase data can be used with an optional carrier phase module. The quadrifilar antenna is integrated to the receiver. Post processing of data is also possible using surveying receiver like ASHTECH XII located at a reference station. Relative accuracy is about 3 to 5 metres. This is in many cases sufficient for thematic purposes.

Many hand held navigation receivers are available with added features. The latest market situation can be obtained through journals like GPS world etc.

For most navigation purpose a single frequency C/A code receiver is sufficient. For accuracy requirements better than 50 to 100 meters, a differential option is essential. For requirement below 5 meters, the inclusion of carrier phase data is necessary. In high precision navigation the use of a pair of receivers with full geodetic capability is advisable. The main characteristics of multipurpose geodetic receiver are summarized in Table 4. 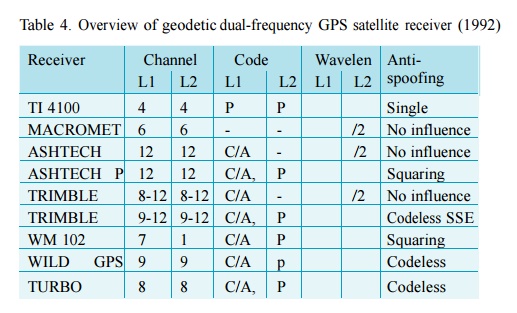 Some of the important features for selecting a geodetic receiver are :

Further, it is recommended to use dual frequency receiver to minimize ion-spherical influences and take advantages in ambiguity solution.