A writ is an order or command issued by a court in writing under its seal. It is in the nature of a command or prohibition from performing certain acts that are specified in the orders of the court. Both the Supreme Court and the High Courts are empowered to issue five kinds of writs. That is why the Supreme Court is called the “Guardian of the Constitution”. According to Dr. Ambedkar, Article 32 is “the heart and soul of the Constitution”.

It protects the petitioner who requires legal help to get his work done by respective public authorities.

It prohibits a subordinate court from acting beyond its jurisdiction.

It quashes an order issued by a subordinate court by overstepping its jurisdiction.

It prevents usurpation of public office through illegal manner.

When the President makes a Proclamation of Emergency under Article 352, the freedoms guaranteed under Article 19 are automatically suspended. The President can suspend other fundamental rights through specific orders. These orders must be approved by the Parliament.

Differences between Fundamental Rights and Directive Principles of State Policy 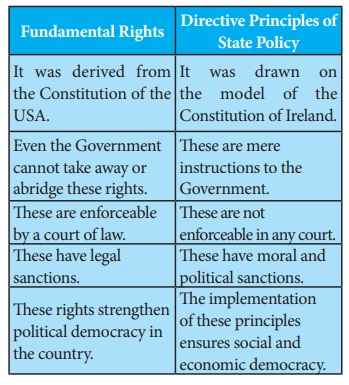 I. RIGHT TO EQUALITY

Art. 15 - Prohibition of discrimination on grounds of religion, race, caste, sex or place of birth.

Art. 16 - Equality of opportunity in matters of public employment.

Art. 18 - Abolition of titles except military and academic.

Art. 20 - Protection in respect of conviction for offences.

Art. 21A - Right to elementary education.

Art. 22 - Protection against arrest and detention in certain cases.

Art. 23 - Prohibition of traffic in human beings and forced labour.

Art. 24 - Prohibition of employment of children in factories, etc.

Art. 25 - Freedom of conscience and free profession, practice and propagation of religion.

Art. 27 - Freedom from payment of taxes for promotion of any religion.

Art. 29 - Protection of language, script and culture of minorities.

Art. 30 - Right of minorities to establish and administer educational institutions.

(Art. 31) was deleted from the list of Fundamental Rights by the 44th Amendment Act, 1978. It is made a legal right under Article 300-A in Part XII of the Constitution.

Art. 32 - It allows individuals to seek redressal for the violation of their fundamental rights.

Violation of which Fundamental right is associated with the theme depicted in the stamps? 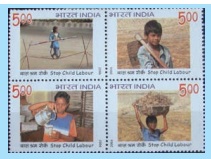