The Fundamental Duties in the Indian Constitution are inspired by the Constitution of former USSR. In 1976, the Congress party set up the Sardar Swaran Singh Committee to make recommendations on fundamental duties. 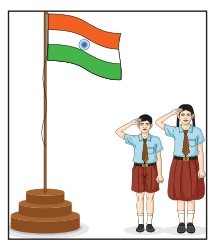 c) To uphold and protect the sovereignty,unity andintegrity of India

e) To promote harmony and the spirit of common brotherhood among all the people of India transcending religious, linguistic and regional or sectional diversities; to renounce practices derogatory to the dignity of women

g) To protect and improve the natural environment including forests, lakes, rivers and wildlife, and to have compassion for living creatures

h) To develop scientific temper, humanism and the spirit of inquiry and reform

i) To safeguard public property and to abjure violence

j) To strive towards excellence in all spheres of individual and collective activity, so that the nation constantly rises to higher levels of endeavour and achievement