There are three main factors which govern the solubility of a solute. They are: (i) Nature of the solute and solvent (ii) Temperature (iii) Pressure

Usually, there is a limit to the amount of solute that can be dissolved in a given amount of solvent at a given temperature. When this limit is reached, we have a saturated solution and any excess solute that is added, simply resides at the bottom of the solution. The extent of dissolution of a solute in a solvent can be better explained by its solubility. Solubility is measure of how much of a solute can be dissolved in a specified amount of a solvent.

Solubility is defined as the number of grams of a solute that can be dissolved in 100 g of a solvent to form its saturated solution at a given temperature and pressure. For example, 36 g of sodium chloride need to be dissolved in 100 g of water to form its saturated solution at 25°C. Thus the solubility of NaCl in water is 36 g at 25°C. The solubility is mathematically expressed as 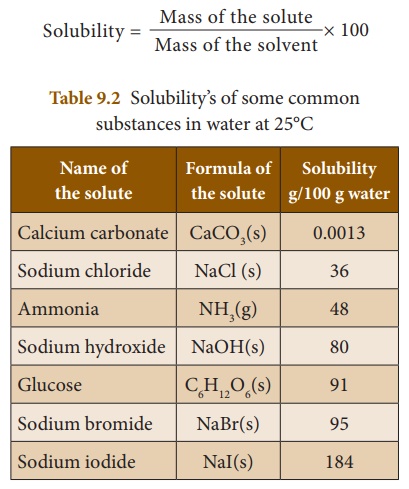 There are three main factors which govern the solubility of a solute. They are:

(i) Nature of the solute and solvent

(i) Nature of the solute and solvent

The nature of the solute and solvent plays an important role in solubility. Although water dissolves an enormous variety of substances, both ionic and covalent, it does not dissolve everything. The phrase that scientists often use when predicting solubility is “like dissolves like.” This expression means that dissolving occurs when similarities exist between the solvent and the solute. For example: Common salt is a polar compound and dissolves readily in polar solvent like water.

Solubility of Solids in Liquid:

Generally, solubility of a solid solute in a liquid solvent increases with increase in temperature. For example, a greater amount of sugar will dissolve in warm water than in cold water.

In endothermic process, solubility increases with increase in temperature.

In exothermic process, solubility decreases with increase in temperature.

Solubility of Gases in liquid

Aquatic animals live more in cold regions because, more amount of dissolved oxygen is present in the water of cold regions. This shows that the solubility of oxygen in water is more at low temperatures.