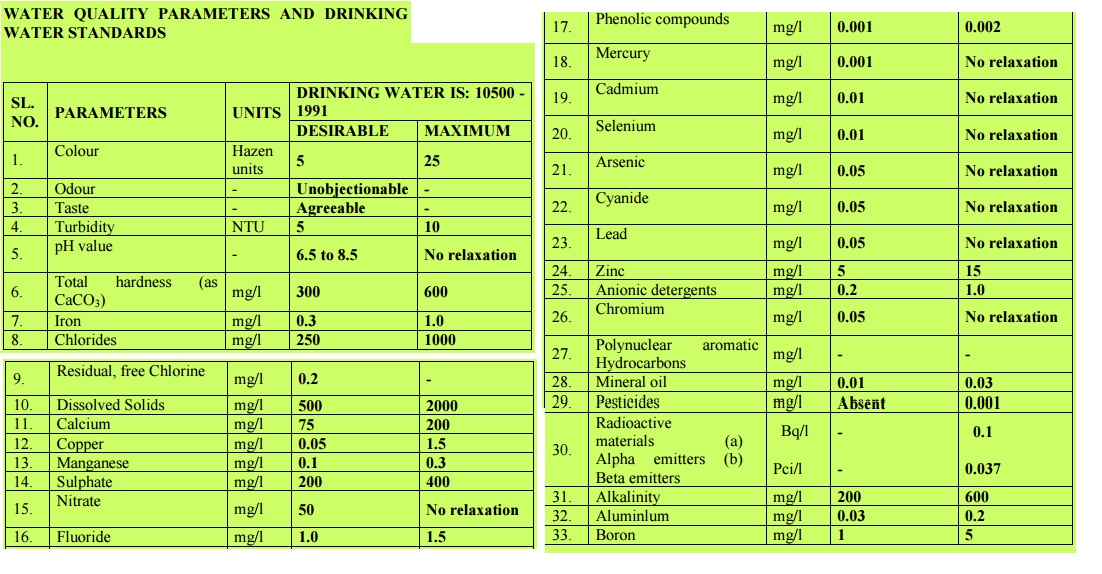 Water quality is the physical, chemical and biological characteristics of water. It is a measure of the condition of water relative to the requirements of one or more biotic species and or to any human need or purpose.

Water quality is the physical, chemical and biological characteristics of water. It is a measure of the condition of water relative to the requirements of one or more biotic species and or to any human need or purpose. It is most frequently used by reference to a set of standards against which compliance can be assessed. The most common standards used to assess water quality relate to drinking water, safety of human contact and for the health of ecosystems.

In the setting of standards, agencies make political and technical/scientific decisions about how the water will be used. In the case of natural water bodies, they also make some reasonable estimate of pristine conditions. Different uses raise different concerns and therefore different standards are considered. Natural water bodies will vary in response to environmental conditions. Environmental scientists work to understand how these systems function which in turn helps to identify the sources and fates of contaminants. Environmental lawyers and policy makers work to define legislation that ensure that water is maintained at an appropriate quality for its identified use.

The vast majority of surface water on the planet is neither potable nor toxic. This remains true even if sea water in the oceans (which is too salty to drink) is not counted. Another general perception of water quality is that of a simple property that tells whether water is polluted or not. In fact, water quality is a very complex subject, in part because water is a complex medium intrinsically tied to the ecology of the Earth. Industrial pollution is a major cause of water pollution, as well as runoff from agricultural areas, urban stormwater runoff and discharge of treated and untreated sewage (especially in developing countries).

The parameters for water quality are determined by the intended use. Work in the area of water quality tends to be focused on water that is treated for human consumption or in the environment.

Contaminants that may be in untreated water include microorganisms such as viruses and bacteria; inorganic contaminants such as salts and metals; organic chemical contaminants from industrial processes and petroleum use; pesticides and herbicides; and radioactive contaminants. Water quality depends on the local geology and ecosystem, as well as human uses such as sewage dispersion, industrial pollution, use of water bodies as a heat sink, and overuse (which may lower the level of the water).

In the United States, the U.S. Environmental Protection Agency (EPA) limits the amounts of certain contaminants in tap water provided by public water systems. The Safe Drinking Water Act authorizes EPA to issue two types of standards: primary standards regulate substances that potentially affect human health, and secondary standards prescribe aesthetic qualities, those that affect taste, odor, or appearance. The U.S. Food and Drug Administration (FDA) regulations establish limits for contaminants in bottled water that must provide the same protection for public health. Drinking water, including bottled water, may reasonably be expected to contain at least small amounts of some contaminants. The presence of these contaminants does not necessarily indicate that the water poses a health risk.

Some people use water purification technology to remove contaminants from the municipal water supply they get in their homes, or from local pumps or bodies of water. For people who get water from a local stream, lake, or aquifer (well), their drinking water is not filtered by the local government.

Environmental water quality, also called ambient water quality, relates to water bodies such as lakes, rivers, and oceans. Water quality standards vary significantly due to different environmental conditions, ecosystems, and intended human uses. Toxic substances and high populations of certain microorganisms can present a health hazard for non-drinking purposes such as irrigation, swimming, fishing, rafting, boating, and industrial uses. These conditions may also affect wildlife which use the water for drinking or as a habitat. Modern water quality laws general specify protection of fisheries and recreational use and require as a minimum,retention of current quality standards. 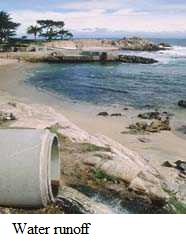 There is some desire among the public to return water bodies to pristine, or pre-industrial conditions. Most current environmental laws focus of the designation of uses. In some countries these allow for some water contamination as long as the particular type of contamination is not harmful to the designated uses. Given the landscape changes in the watersheds of many freshwater bodies, returning to pristine conditions would be a significant challenge. In these cases, environmental scientists focus on achieving goals for maintaining healthy eco-systems and may concentrate on the protection of populations of endangered species and protecting human health.

The complexity of water quality as a subject is reflected in the many types of measurements of water quality indicators. Some of the simple measurements listed below can be made on site-temperature, pH, dissolved oxygen, conductivity, Oxygen Reduction potential (ORP), turbidity, Secchi disk depth-in direct contact with the water source in question. More complex measurements that must be made in a lab setting require a water sample to be collected, preserved, and analyzed at another location. Making these complex measurements can be expensive. Because direct measurements of water quality can be expensive, ongoing monitoring programs are typically conducted by government agencies. However, there are local volunteer programs and resources available for some general assessment. Tools available to the general public are on-site test kits commonly used for home fish tanks and biological assessments.

Testing in response to natural disasters and other emergencies

Inevitably after events such as earthquakes and Tsunamis, there is an immediate response by the aid agencies as relief operations get underway to try and restore basic infrastructure and provide the basic fundamental items that are necessary for survival and subsequent recovery. Access to clean drinking water and adequate sanitation is a priority at times like this. The threat of disease increases hugely due to the large numbers of people living close together, often in squalid conditions, and without proper sanitation.

After a natural disaster, as far as water quality testing is concerned there are widespread views on the best course of action to take and a variety of methods can be employed. The key basic water quality parameters that need to be addressed in an emergency are bacteriological indicators of fecal contamination, Free Chlorine Residual, pH, turbidity and possibly Conductivity/TDS. There are a number of portable water test kits on the market widely used by aid and relief agencies for carrying out such testing.

The following is a list of indicators often measured by situational category:

Biological monitoring metrics have been developed in many places, and one widely used measure is the presence and abundance of members of the insect orders Ephemeroptera, Plecoptera and Trichoptera. (Common names are, respectively, Mayfly, Stonefly and Caddisfly.) EPT indexes will naturally vary from region to region, but generally, within a region, the greater the number of taxa from these orders, the better the water quality. EPA and other organizations in the United States offer guidance on developing a monitoring program and identifying members of these and other aquatic insect orders.