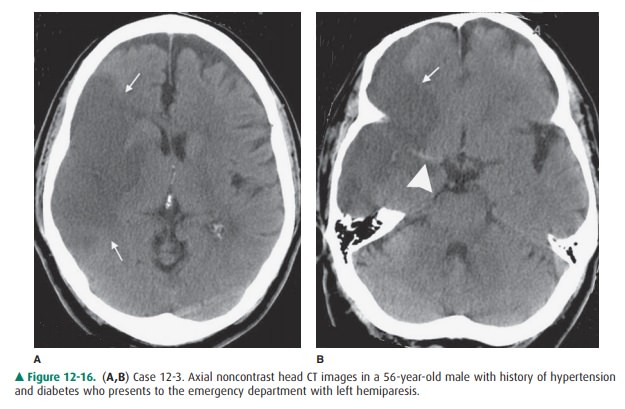 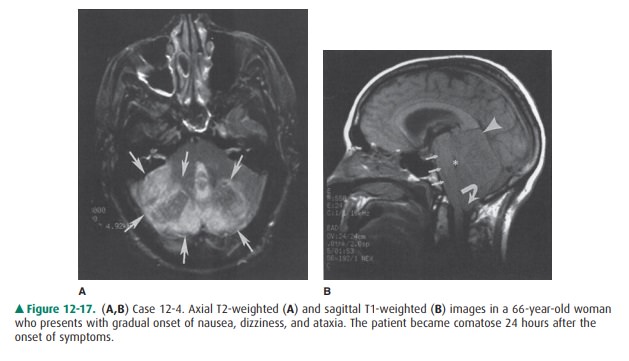 B.         Brainstem compression from cerebellar infarction 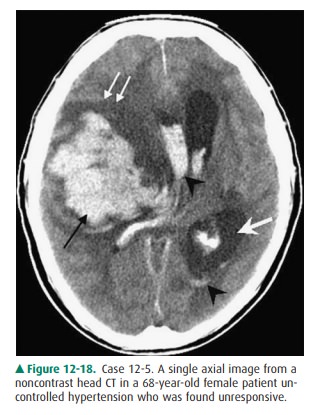 12-3. In this case, the axial CT image (Figure 12-16 A) demonstrates a well-defined area of hypodensity (white arrows) in the right middle cerebral artery (MCA) territory. There is secondary mass effect on the surrounding brain parenchyma with effacement of the cortical sulci. In a more inferior axial image (Figure 12-16 B), note the bright right MCA (arrow-head) corresponding to an acute thrombus in the main trunk of this vessel (E is the correct answer to Question 12-3).

12-4. In this case, the axial T2-weighted MR image (Figure 12-17 A) shows areas of increased T2 signal (arrows) corresponding to edema within the cerebellum. A sagittal T1-weighted image (Figure 12-17 B) shows a swollen cerebellum, as well as upward transtentorial (arrowhead) and downward tonsillar (curved arrow) herniation of cerebellar tissue. Also note compres-sion of the brainstem (small arrows) and fourth ven-tricle (asterisk). These changes are compatible with a recent cerebellar infarction with brainstem compres-sion caused by the swollen cerebellum (B is the cor-rect answer to Question 12-4). 12-5. In this case, an axial CT scan (Figure 12-18) demon-strates a large, hyperdense intraparenchymal hemor-rhage centered in the right basal ganglia (black arrow) with surrounding edema and mass effect (double white arrows). Intraventricular extension of hemorrhage is present (black arrowheads) with en-trapment of the left lateral ventricle secondary to midline shift (single white arrow). This is most likely secondary to the patient’s known hypertension (D is the correct answer to Question 12-5).

Stroke is a lay term for neurologic dysfunction. The usual image of a stroke patient is that of an elderly individual with hemiparesis, often associated with abnormal speech. There are actually many different causes of stroke. These include cerebral infarction, intracerebral hemorrhage, subarachnoid hemorrhage, and miscellaneous causes such as dural sinus occlusion with associated venous infarction. Although these conditions may have similar clinical presentations, they have different treatments and prognoses.

The vast majority of strokes are cerebral infarctions as-sociated with atherosclerosis. The radiologic manifestations of cerebral infarction vary with time. The head CT scan of the patient in Case 12-3 was obtained several days after the onset of symptoms and shows typical findings of a subacute infarct in a major vascular territory, in this case, the right middle cerebral artery region. By this time, the infarct is a very well-defined area of low attenuation compared to nor-mal surrounding brain. There is associated mass effect from the edematous tissue. Acute infarcts (less than 24 hours since onset of symptoms) may be difficult to identify on head CT scans, if at all. However, diffusion-weighted MR imaging often demonstrates brain abnormalities within hours of symptom onset. Subtle changes on head CT scans in acute infarction can sometimes be seen, but may be over-looked if the examination is not closely scrutinized. Some-times the only apparent change on CT scans is a subtle loss of gray matter/white matter differentiation in the area of in-farction. CT scanning is performed in acute cerebral infarc-tion because scans can be quickly obtained, and CT is a very good test for identifying intracranial hemorrhage, an im-portant finding for management considerations. Institu-tions that are involved in the early management of stroke often have a stroke imaging protocol whereby noncontrast CT is typically obtained along with CT angiography (Figure 12-19 A, B) as well as CT perfusion. If the infarct is not ob-vious on the initial CT scan, an MR scan is usually obtained to verify high clinical suspicion. 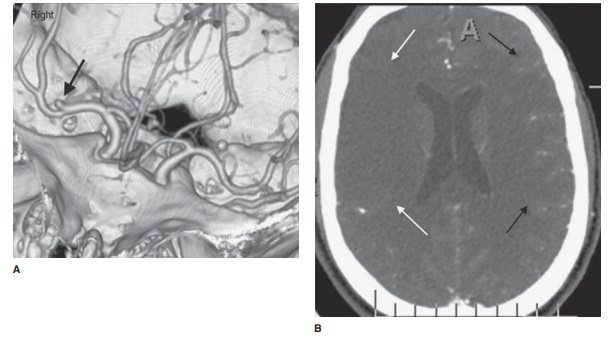 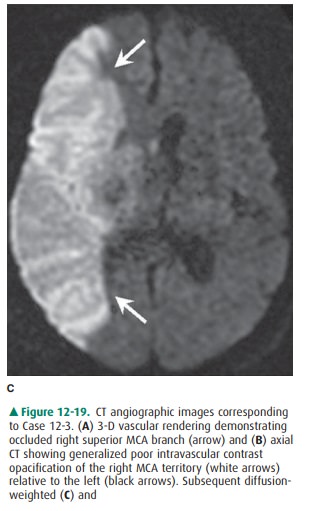 An acute or subacute infarction will exhibit a diffusion signal abnormality that reflects the restricted movement of water molecules and typically persists for 1 to 2 weeks within infarcted tissue (Figure 12-19 C). T2-weighted imagingdemonstrates increased signal within the infarcted territory due to the presence of cytotoxic edema (Figure 12-19 D). In-travascular enhancement extending into the cortical sulci may be seen in the acute to early subacute phase of infarct, generally related to prolonged intravascular opacification from slow vas-cular flow (Figure 12-19 E). Within several days of a cerebral infarction, parenchymal enhancement is commonly identified along the cortex, which usually has a bandlike, tubular, or gyri-form appearance and may persist for several weeks. Solid or ring-enhancing areas, as well as more amorphous-appearing patterns of enhancement, can occasionally occur.

Case 12-4 illustrates an important point to consider when deciding which test to order in the setting of acute stroke. In this case, the patient’s symptoms were worrisome for a brain-stem process. CT scanning of the brainstem and posterior fossa is frequently degraded by streak artifacts emanating from the dense bone of the skull base. Subtle (and sometimes not so subtle) abnormalities may not be apparent. Therefore, for most neurologic conditions that involve the brainstem or posterior fossa, MR scans are much better at depicting an ab-normality. Notice that the patient in Case 12-4 did not in fact have a brainstem infarct, as was suspected clinically, but rather had brainstem compression from a large cerebellar infarct.

Case 12-5 illustrates how essential an imaging examina-tion is in managing stroke as the patient initially had signs of cerebral infarction. The CT scan demonstrated an obvious basal ganglia hemorrhage, probably secondary to the pa-tient’s hypertension. Management of these two conditions is considerably different. Hypertension is the main cause of nontraumatic intracranial hemorrhage. In adults, these hem-orrhages typically occur in the putamen/external capsule. Other locations for hypertensive hemorrhage include the thalamus, pons, cerebellum, and, rarely, subcortical white matter. Acute parenchymal hematomas, as in this case, are usually hyperdense on CT scans. With time these lesions be-come darker and eventually appear as round or slitlike cavi-ties. The MR imaging appearance of a parenchymal hematoma is complex and depends largely on the presence of hemoglobin breakdown products within the clot.