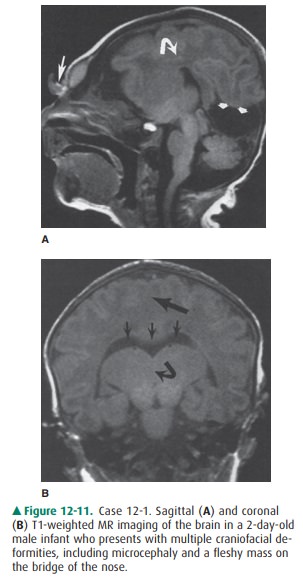 D.         Herniation of intracranial contents through a skull defect 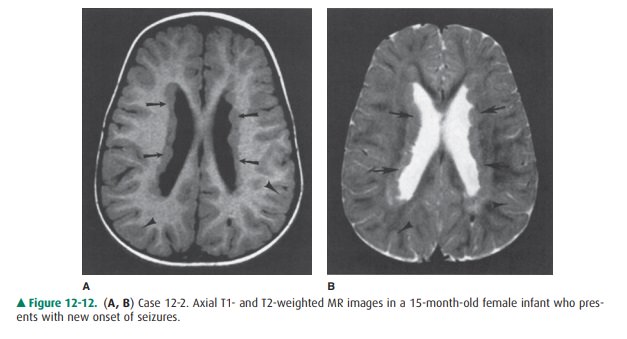 D.         Nodules along ventricles in a patient with tuber-ous sclerosis

12-1. In this case, the corpus callosum (curved arrow) is absent on the sagittal T1 MR image (Figure 12-11 A). Also note other midline abnormalities, including ab-normal tissue at the bridge of the nose (large arrow) and a posterior cyst (small arrows). Coronal T1-weighted MR image (Figure 12-11 B) demonstrates a monoventricle (small arrows) and thalamic fusion (curved arrow). Also note the lack of separation of the two hemispheres (large arrow) (C is the correct answer to Question 12-1).

Two common reasons for performing MR scans in young in-fants are illustrated by the cases in this section. Infants with craniofacial anomalies frequently have underlying congenital malformations of the CNS. Seizures, too, may be the first sign of an underlying brain malformation. As discussed in the section on technique selection, whenever a congenital brain anomaly is suspected, MR imaging is the best examination to perform.

Insults to the developing brain lead to predictable alter-ations of brain morphology. By analyzing patterns of al-tered brain morphology, we can often determine which stage of CNS development has been disrupted. This analy-sis, combined with knowledge of neuroembryology, has al-lowed for the development of systems to classify congenital anomalies of the CNS. One simplified classification system divides congenital malformations into disorders of organo-genesis (which include abnormalities of neural tube closure, diverticulation/cleavage, sulcation/cellular migration, and size, as well as destructive lesions acquired in utero), disor-ders of histogenesis (ie, neurocutaneous syndromes), and disorders of cytogenesis (ie, congenital neoplasms). Readers are referred to the suggested readings at the end of this chap-ter for further information on this topic.

In Case 12-2, the patient has heterotopic gray matter lin-ing the lateral ventricles. This congenital anomaly is one type of disordered cellular migration. Neurons that make up the gray matter of the cerebral cortex actually develop along the edges of the lateral and third ventricles within the so-called germinal matrix zone. They then migrate outward to their final cortical location. If this normal neuronal migration is disrupted, a normal cortex may not develop, and foci of gray matter may be present in abnormal locations along the mi-gration route. Collections of these normal neurons in abnor-mal locations are called gray matter heterotopias.

Several different types of heterotopias have been described. The case presented in this section demonstrates a focal nodu-lar gray matter heterotopia involving the subependymal regionat the edge of the lateral ventricles. Seizures frequently occur in patients with this condition, as in the patient in Case 12-2. Be-cause MR imaging usually provides an exact diagnosis of this condition, biopsies of CNS tissue are unnecessary.

In contrast to focal nodular heterotopias, diffuse (or laminar) heterotopias are commonly seen within or adja-cent to the cortex, while “band” type heterotopias are lo-cated deep to the normal cortex, in a subcortical location, separated by a thin interface of white matter (Figure 12-13). Band-type heterotopias are well defined, with smooth mar-gins, demonstrating signal intensities identical to those of normal gray matter. Mass effect on the underlying white matter or deep gray structures may be seen, and the sulca-tion pattern of the brain superficial to the heterotopia may be abnormal. Associated CNS anomalies may be present, such as agenesis of the corpus callosum, holoprosencephaly, or herniation of brain tissue (encephaloceles). Although at first glance the cortex may appear to be markedly thickened, closer examination will reveal an additional band of gray matter in a subcortical location, which may or may not demonstrate increased 18F-FDG activity on a PET scan. This band of heterotopia is known to be associated with in-tractable seizures, occurring earlier than in the focal type, as well as severe developmental delay. 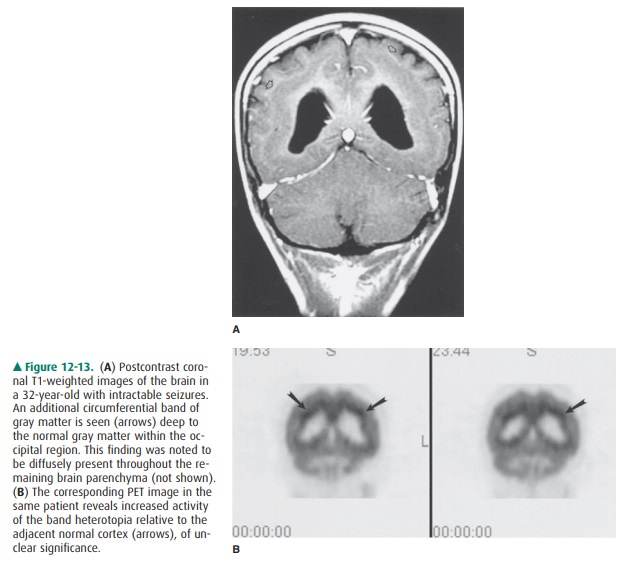 Several types of Chiari malformations were initially de-scribed by the German pathologist Hans Chiari, who clas-sified these congenital hindbrain anomalies into three types. In each case, abnormal descent of cerebellar tissue into the cervical canal is demonstrated. A Chiari I malfor-mation is associated with a relatively small posterior fossa and a normal-sized cerebellum. Consequently, elongated peglike cerebellar tonsils extend below the foramen mag-num with effacement of the corresponding CSF spaces. There is often dorsal tilting of the dens, which may indent the brainstem. There is no association between Chiari I malformations and neural tube defects; however, the spine should be imaged because of the common coexistence of a syrinx.

In contrast to Chiari I, the Chiari II malformation is very highly associated with myelomeningocele and generally supratentorial abnormalities. The posterior fossa is small with herniation of cerebellar tonsils, vermis, and medulla below the foramen magnum. Because the cervical cord is somewhat fixed in position by the dentate ligaments, this downward displacement results in a characteristic cervi-comedullary kink. The fourth ventricle is low-lying and elon- gated as well, with distortion of the cerebral aqueduct and tectum (so-called tectal beaking), often resulting in hydro-cephalus. The superior cerebellum towers superiorly through a widened tentorium incisura, with the remainder of the cerebellum wrapping around the brainstem. Supratentorial abnormalities include agenesis or hypoplasia of the corpus callosum, enlarged massa intermedia, deficiency of the falx resulting in interdigitation of cortical gyri across the midline, and enlarged occipital horns (colpocephaly) (Figure 12-14). Chiari III malformations are associated with occipital or high cervical encephaloceles, containing cerebellar tissue, with or without brainstem. 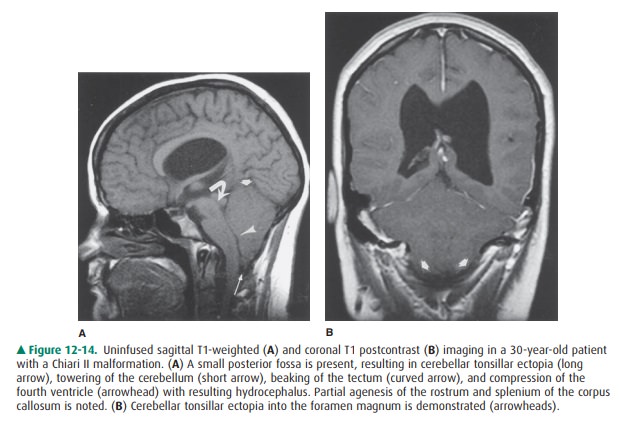 Disorders of histogenesis include the neurocutaneous syndromes, which are a heterogeneous group of disorders with CNS and, for the most part, cutaneous manifesta-tions. Visceral and connective tissue abnormalities may be prominent. Common disorders within this group include neurofibromatosis types I and II, tuberous sclerosis, von Hippel-Lindau disease, and Sturge-Weber syndrome, where the abnormal lesions corresponding to these entities are neurogenic tumors, tubers, hemangioblastomas, and angiomas, respectively.

Neurofibromatosis type 1 is the most common of all the neurocutaneous syndromes, accounting for 90% of all neu-rofibromatosis cases, and is the only entity discussed here. It is transmitted on the long arm of chromosome 17 and is a disease of childhood. Autosomal dominant transmission oc-curs in 50%, and the remainder appear sporadically as new mutations in a patient with no known family history of the disease. The diagnosis is established when two or more of the following criteria are present: (1) six or more café-au-lait spots (brown skin pigmentation), (2) two or more Lisch nod-ules (hamartomas) of the iris, (3) two or more neurofibro-mas, (4) one or more plexiform neurofibromas, (5) axillary freckling, (6) one or more bone dysplasias (ie, dysplasia of the greater sphenoid wing), (7) optic nerve glioma, or (8) first-degree relative with neurofibromatosis type 1.

The optic pathway gliomas are generally nonaggressive (low-grade) pilocytic astrocytomas, which present in child-hood and may not affect vision until greatly increased in size (Figure 12-15 A). Cerebellar, brainstem, and cerebral astro-cytomas may additionally be seen. High T2 signal intensity foci may be identified within the peduncles or deep gray mat-ter of the cerebellum, brainstem, basal ganglia (particularly the globus pallidus), and supratentorial white matter (Figure 12-15 B). The nature of these lesions remains unresolved. 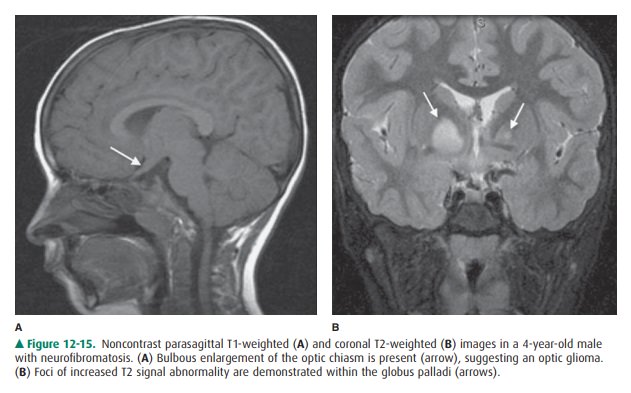