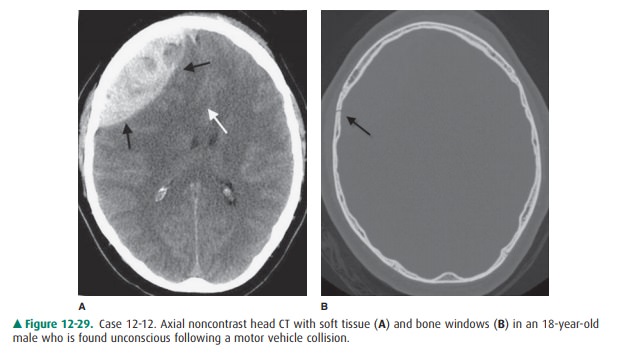 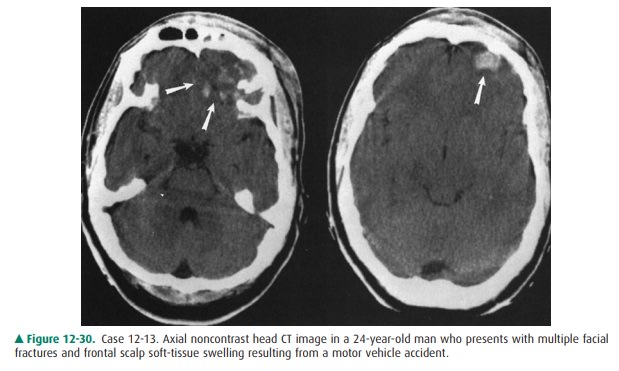 12-1.  In this case, a predominantly high-density, extra-axial, hemorrhagic collection (black arrows) is pro-ducing mass effect on the right frontal lobe on an unenhanced head CT scan (Figure 12-29 A). Mass effect results in marked distortion of the underly-ing cortex and leftward subfalcine herniation (white arrow) (Figure 12-29 A). A linear nonde-pressed fracture is present along the anterior aspect of the right parietal bone (black arrow) (Figure 12-29 B). The biconvex appearance of this lesion is typical of an epidural hematoma, which is the acute finding in this case (C is the correct answer to Question 12-12).

12-13.  In this case, there are multiple areas of increased at-tenuation within the frontal lobes, especially on the left (arrows) (Figure 12-30). These areas correspond to multiple hemorrhagic contusions involving the brain parenchyma (D is the correct answer to Ques-tion 12-13).

Subdural hematoma, on the other hand, is usually a cres-cent-shaped extra-axial collection that may cross suture lines, but is confined by the dural reflections (Figure 12-31). These lesions are more lethal than are epidural hematomas; the subdural hematoma mortality rate is over 50%. CT can usually, but not always, distinguish between epidural hematomas and subdural hematomas. Subdural hematomas are a commonly identified abnormality in the abused child (nonaccidental trauma). CT scans are obtained to detect thepresence of subdural hematomas (Figure 12-32). A brain MRI, however, can more sensitively delineate small extra-axial hematomas, subdural hematomas of varying ages, and coexisting cortical contusions or shearing injuries. A shear-ing injury (or diffuse axonal injury) is associated with an overall poor prognosis and is recognized as small petechial hemorrhages at the gray-white junction and in the corpus callosum. Interhemispheric (para- and intrafalcial) sub-dural hematomas may arise from tearing of bridging veins along the falx cerebri in shaking injuries and are nearly pathognomic for nonaccidental trauma. Retinal hemor-rhages may be present and are also suspicious, especially if bilateral. In addition, cerebral ischemia/infarction and mul-tiple, complex, unexplained skull fractures may be associ-ated findings. 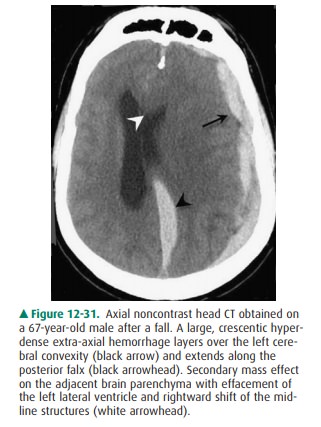 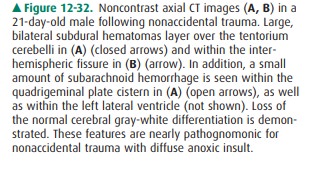 Cerebral contusions (Case 12-13) are the second most common form of brain parenchymal injury in primary head trauma (diffuse axonal injury is the most common parenchy-mal injury). Cerebral contusions can be thought of as brain bruises. They result either from the brain striking a bony ridge inside the skull during rapid acceleration/deceleration, as occurs in a motor vehicle accident, or from a depressed skull fracture. These lesions tend to occur in particular anatomic locations, especially the undersurfaces and poles of the frontal and temporal lobes (Figure 12-33). CT scans show areas of low attenuation (edema) and hemorrhage at the site of injury. Delayed hemorrhage, 1 to 2 days after a head injury, is common with contusions. 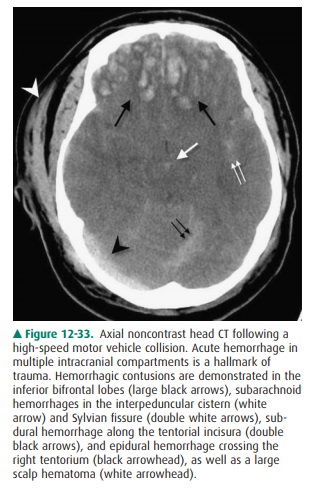