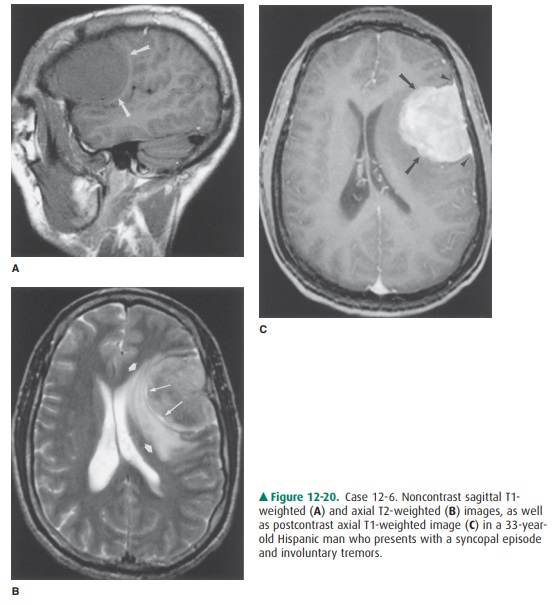 12-6. In this case, the sagittal T1-weighted image before contrast administration shows an extra-axial, left frontal convexity mass (Figure 12-20 A, arrows). This homogenous-appearing, smoothly marginated, mass (arrows) is isointense to the normal gray matter (Fig-ure 12-20 A), and is sometimes difficult to differenti-ate from normal brain tissue on unenhanced T1 images. On T2-weighted imaging, the mass has a het-erogeneous appearance, but is predominantly isoin-tense to gray matter (Figure 12-20 B). The mass is circumscribed by a thin rim (pseudocapsule) of in-creased T2 signal (long arrows), as well as marginated by a more peripherally located band of T2 signal hy-perintensity along its medial and posterior borders (short arrows). There is distortion of the adjacent brain parenchyma, with compression of the left lat-eral ventricle, and a mild shift of the midline struc-tures to the right. Following intravenous GdDTPA administration, the mass enhances uniformly (ar-rows), and dural tails are identified (arrowheads), al-lowing easy identification (Figure 12-20 C). These features are fairly typical of a meningioma (A is the correct answer to Question 12-6).

12-7. In this case, a coronal T2 FLAIR-weighted MR image (Figure 12-21 A) demonstrates a large area of signal hyperintensity involving the inferior frontal regions (large white arrows) and right temporal lobe (small white arrow), with extension into the corpus callo-sum (curved arrows). On the infused axial view, at the level of the body of the corpus callosum (Figure 12-21 B), subtle, ill-defined enhancement is present within the right cerebral hemisphere (arrowhead) with patchy enhancement (arrows) extending into the body of the corpus callosum. This is one appear-ance of a malignant brain tumor, in this case, an anaplastic oligodendroglioma (E is the correct an-swer to Question 12-7).

12-8. In this case, a contrast-enhanced axial CT scan shows no definite abnormality (Figure 12-22 A). A gadolin-ium-enhanced axial T1-weighted MR image shows multiple enhancing lesions (arrows) within the brain parenchyma (Figure 12-22 B). In a patient with known lung cancer, metastatic disease is the most likely explanation for multiple intracranial enhanc-ing lesions (A is the correct answer to Question 12-8).

Brain tumors can be classified in a variety of ways. The tradi-tional classification of intracranial neoplasms is based on his-tology. In this system, brain tumors are either primary (they arise from the brain and its linings) or secondary (they arise from somewhere outside the CNS, ie, metastases). Primarytumors, which account for approximately two-thirds of all brain neoplasms, can be subdivided into glial and nonglial tumors. Secondary tumors, especially from lung and breast cancer, account for the remaining one-third of brain neo-plasms. Metastases are most commonly parenchymal, but can also involve the skull and meninges.

Case 12-6 illustrates a useful principle for interpreting studies of patients with suspected brain tumors. It is very im-portant to first decide whether a mass is within the brain parenchyma (intra-axial) or outside the brain (extra-axial). Extra-axial masses usually turn out to be meningiomas, many of which can be removed surgically with a very low in-cidence of recurrence. Intra-axial masses frequently turn out to be astrocytomas, and the prognosis is less favorable.

The patient in Case 12-6 has an extra-axial, dural-based, frontal convexity mass that markedly enhances with Gd-DTPA. Meningiomas comprise 15% to 20% of intracranial tumors, predominantly occur in females, and exhibit a peak age incidence of 45 years. They are the most common nonglial primary CNS tumors. They can occur anywhere within the head but typically occur along the dural venous si-nuses. The parasagittal region and cerebral convexities are the most common locations. Anterior basal or olfactory groove meningiomas account for 5% to 10% of intracranial menin-giomas. Anosmia results from involvement of the olfactory tracts by the tumor. These expansile lesions are slow-grow-ing, and the ensuing mass effect on the adjacent brain parenchyma is gradual. The absence of reactive edema in a subset of these lesions can be seen as a result of their slow growth. These masses usually demonstrate intense and uni-form enhancement, independent of tumor size. A layer of thickened dural enhancement (“dural tail”) is commonly seen extending away from the base of the meningioma. In many cases, this finding represents reactive thickening with-out tumor involvement.

Case 12-7 demonstrates a large, infiltrating (aggressive or high-grade) glioma involving the majority of the right frontotemporal lobe, with extension into the corpus callo-sum. Although there is some overlap of the MR imaging features characteristically seen with these invasive neo-plasms and their less aggressive (lower-grade) counterparts, the imaging features of higher-grade neoplasms, on the whole, are distinctly different from those seen with lower-grade lesions. High-grade gliomas, namely anaplastic astro-cytomas and oligodendrogliomas (as in this case), as well as glioblastoma multiforme (the most highly malignant glioma), demonstrate heterogeneous signal characteristics, generally a reflection of the variable cellularity, in additionto the presence of necrosis, hemorrhage, and cystic foci. Calcification and hemorrhage are more common in oligo-dendrogliomas, often accompanied by cyst formation and necrosis. The spectroscopic findings of decreased NAA and increased choline suggest decreased neuronal/axonal den-sity and increased breakdown of cell membranes (Figure 12-23 A, B). 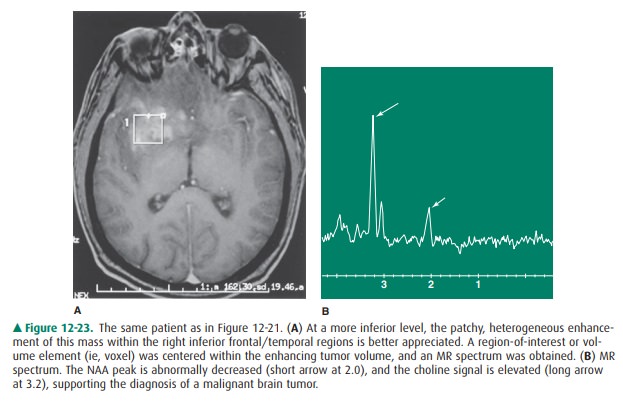 Oligodendrogliomas account for about 5% of primary gliomas, occurring most frequently within the frontal lobe and often involving the cortex. The majority of patients present with seizures. On the other hand, glioblastoma multiforme is the most common primary malignant brain neoplasm and oc-curs most frequently in patients over 50 years of age. Patients with glioblastoma multiforme present with neurologic deficits or new-onset seizures. The prognosis in these latter cases is dis-mal; postoperative survival averages 8 months.

On T2-weighted scans, these high-grade masses usually exhibit heterogeneous signal characteristics, with areas of high T2 signal attributable to tumor tissue, necrosis, cysts, and reactive edema, whereas regions of low signal may reflect hemorrhage or calcification. The corresponding tissue pathology of this region often shows tumor cells residing within and extending beyond the surrounding edema. En-hancement is highly variable within anaplastic oligodendrogliomas. Other types of malignant gliomas, such as glioblastoma multiforme, typically demonstrate intense en-hancement. The corpus callosum is often involved by a high-grade glial tumor, which may grow medially from an adjacent hemispheric source or may arise independently within this structure. “Wings” may extend symmetrically or asymmetri-cally into both cerebral hemispheres, exhibiting a butterfly-type appearance (Figure 12-24), appropriately termed butterfly glioma. Perfusion studies on high-grade gliomas generally show increased blood flow and volume, reflecting the increased vascular density and permeability of these tu-mors. In contrast, low-grade gliomas may appear only as a re-gion of amorphous signal abnormality (most obvious on T2-weighted images), often without associated enhancement or perfusion abnormality. 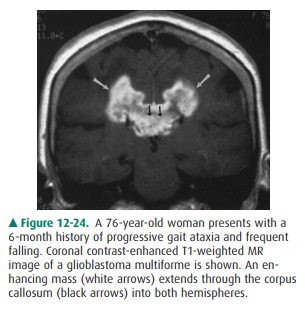 Case 12-8 illustrates a very important point to remem-ber when working up patients with suspected metastatic disease to the brain: MR imaging is considerably more sen-sitive than CT in detecting metastases. This is not a trivial point, because surgical resection of single, not multiple, brain lesions is sometimes performed. Conversely, the suc-cessful application of radiotherapy protocols relies on sen-sitively and accurately detecting the entire metastatic tumor burden. Metastatic disease to the brain has a variety ofmanifestations, the most common being parenchymal involve-ment. Typical hematogenous brain metastases demonstrate solid or ringlike enhancement on CT or MR scans, occur near gray matter/white matter junctions, and are usually surrounded by a marked amount of edema. They most commonly metastasize from lung or breast primaries.