It is a type of microscope in which instead of light beam, a beam of electrons are used to form a large image of very small object. These microscopes are widely used in the field of engineering and medicine.

It is a type of microscope in which instead of light beam, a beam of electrons are used to form a large image of very small object. These microscopes are widely used in the field of engineering and medicine.

A stream of electrons is passed through the object and the electron which carries the information about the object are focused by electric and magnetic fields.

In general, the magnetic lenses are made of two coils C1 and C2 enclosed inside the iron cases which have one hole as shown. 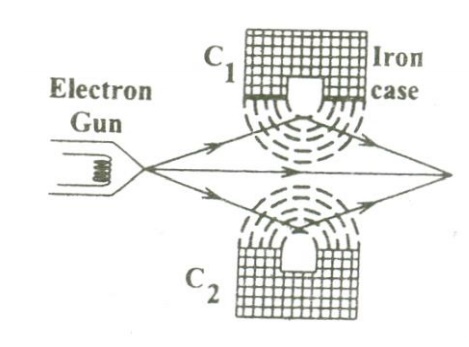 When the holes face each other, the magnetic field in space between the two coils focuses the electrons emerging out from the electron gun. Similarly the divergence of the electrons can also be made by adjusting the position of the holes in the iron cases.

The essential parts of an electron microscope are as shown in the figure and for comparison an optical microscope is also shown aside. 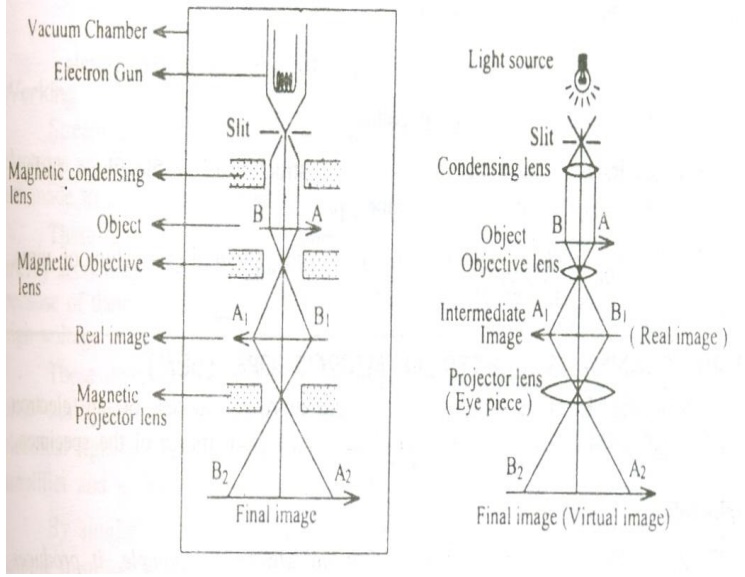 The electron microscope consists of an electron gun to produce the stream of electrons. Similar to the condensing lens, objective and eye piece in an optical microscope here three magnetic lenses are used.

The whole arrangement is kept inside a vacuum chamber to allow the passage of electron beam.

Stream of electrons are produced and accelerated by the electron gun. The electron beam is made to pass through the center of the doughnut shaped magnetic condensing lens. These electrons are made as parallel beam and are focused on to the object.

Thus the transmitted electron beam on the falling over the magnetic objective lens, resolves the structure of the object to form a magnified real image of the object. Further the image can be magnified by the magnetic projector lens and the final image is obtained on the fluorescent screen.

In order to make a permanent record of the image of the object, the final image can also be obtained on a photographic plate.

b.     The focal length of the microscopic system can be varied.

a.      It is used to determine the complicated structure of the crystals.

c.      In industries it is used to study the structure of textile fibers, surface of metals, composition of paper, paints etc.

d.     In the medical field it is used to study about the structure of virus, bacterial etc which are of smaller size.

The electron detector (Scintillator) is used to collect the secondary electrons and can be converted into electrical signal. These signals can be fed into CRO through video amplifier as shown. 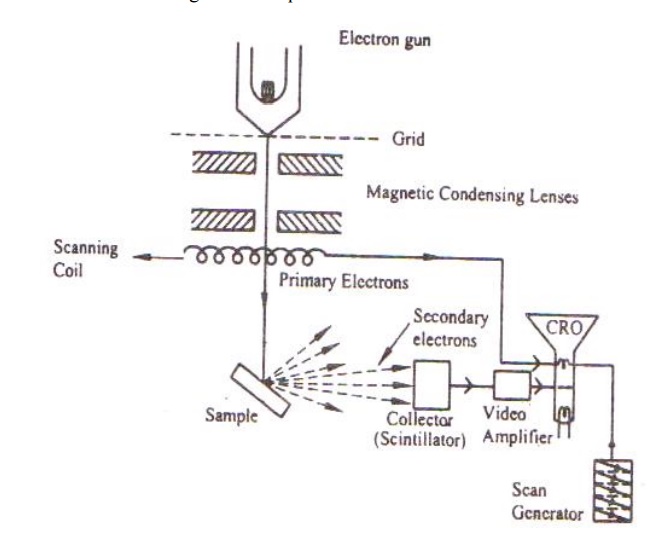 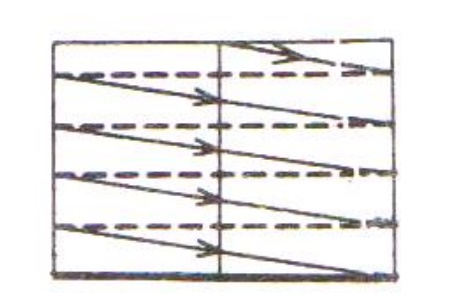 These collected electrons produce scintillations on to the photo multiplier tube are converted into electrical signals. These signals are amplified by the video amplifier and is fed to the CRO.

By similar procedure the electron beam scans from left to right and the whole picture of the sample is obtained in the CRO screen.

Electrons are made to pass through the specimen and the image is formed on the fluorescent screen, either by using the transmitted beam or by using the diffracted beam.

The magnetic objective lens is used to block the high angle diffracted beam and the aperture is sued to eliminate the diffracted beam (if any) and in turn increases the contrast of the image.

The magnetic projector lens is placed above the fluorescent screen in order to achieve higher magnification,. The image can be recorded by using a fluorescent (Phosphor) screen or (CCD – Charged Coupled device) also.

Stream of electrons are produced by the electron gun and is made to fall over the specimen using the magnetic condensing lens.

Based on the angle of incidence the beam is partially transmitted and partially diffracted. Both these beams are recombined at the E-wald sphere to form the image. The combined image is called the phase contrast image.

In order to increase the intensity and the contrast of the image, an amplitude contrast has to be obtained. This can be achieved only by using the transmitting beam and thus the diffracted beam can be eliminated. 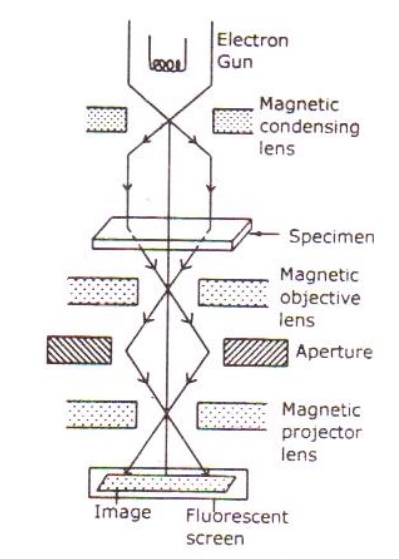 The magnified image is recorded in fluorescent screen or CCD. This high contrast image is called Bright Field Image.

Also, it has to be noted that the bright field image obtained is purely due to the elastic scattering (no energy change) i.e., due to transmitted beam alone. 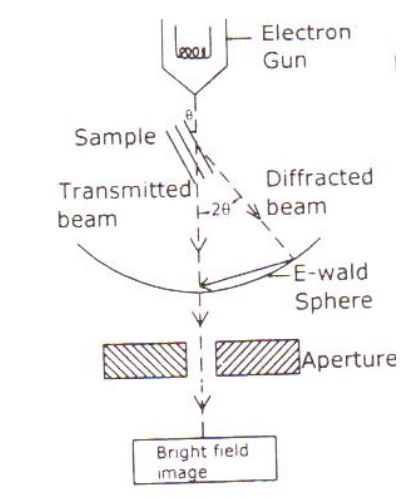