In practice a perfect black body is not available. Therefore let us consider a hollow sphere coated with lamp black on its inner surface. 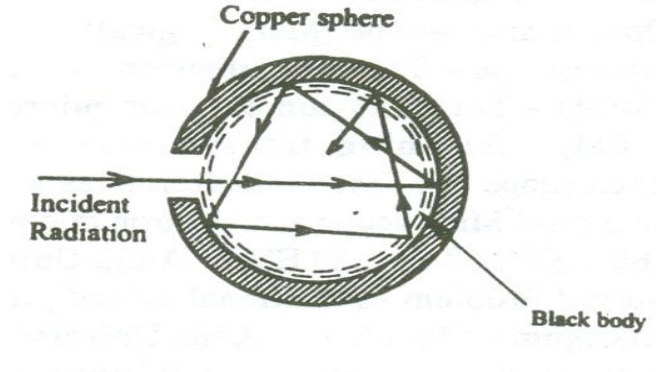 A fine hole is made for radiations to enter into the sphere as shown in the figure.

Now when the radiations are made to pass through the hole it undergoes multiple reflections and are completely absorbed. Thus the black body acts as a perfect absorber.

When a perfect black body is allowed to emit radiations at different temperatures , then the distribution of the energy for different wavelengths at various temperatures is obtained as shown in the figure.

From figure the following results are formulated. 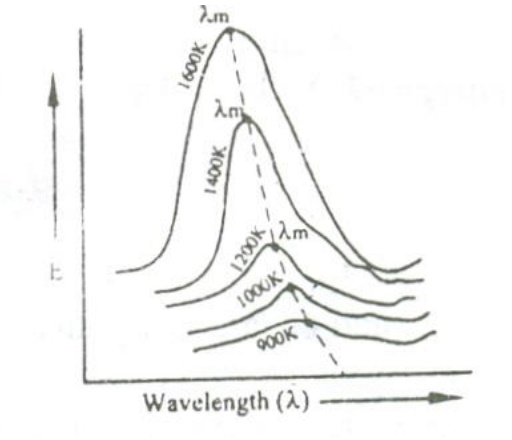 i.            The energy distribution is not uniform for a given temperature.

iii.           When the temperature is increased, the maximum wavelength (λm) decreases.

iv.         The total energy emitted at any particular temperature can be calculated from the area under that particular curve.

Laws for explaining the energy distribution:

According to this law the radiant energy (E) of the body is directly proportional to the fourth power of the temperature (T) of the body.

This law states that the product of then wavelength λ maximum energy and the absolute temperature (T) is a constant.

This law shows that, as the temperature increases, the wavelength corresponding to maximum energy decreases.

Wien also showed that the maximum energy (Emax) is directly proportional to the fifth power of the absolute temperature.

By deducing this law he obtained a law called Wien’s law of distribution of energy (Eλ), given by

It is governed by the equation

Where KB is Boltzmann Constant.