Effects of n-3 polyunsaturated fatty acids from plants and fish

The current dietary recommendation for the intake of long-chain n-3 PUFAs (eicosapentaenoic acid/doc-osahexaenoic acid) in the UK is 450 mg/day.

Effects of n-3 polyunsaturated fatty acids from plants and fish

The current dietary recommendation for the intake of long-chain n-3 PUFAs (eicosapentaenoic acid/doc-osahexaenoic acid) in the UK is 450 mg/day (SACN, 2004). This was to increase intake by consuming two portions of fish per week, one of which should be oily (e.g., mackerel, sardines). This recommendation was based on evidence from a host of epidemiological and intervention studies, which showed that regular fish consumption could reduce the risk of sudden cardiac death. Since this an acute end-point of CHD, the ben-efits of fish oil have been ascribed to the prevention of fatal cardiac arrhythmia, and, to a lesser extent, coronary thrombosis, but not to any favorable effects on blood lipids. However, there is also convincing evidence to show that fish oil supplementation (1 g/ day for 3 years) reduces the incidence of death from CHD in healthy, free-living subjects. This longer term benefit may be linked to the effects of eicosapentae-noic acid/docosahexaenoic acid on a host of other cardiovascular risk factors, including plasma TAGs and lipoproteins.

Long-chain n-3 PUFAs exert multiple effects on lipid metabolism, the most notable of which is the capacity to decrease postabsorptive plasma TAG levels by 20–30%. Fish oil-enriched diets have also been shown to attenuate the magnitude and duration of postprandial lipemia following the ingestion of a fat-containing meal. These effects are frequently accom-panied by beneficial changes in circulating LDLs and HDLs, and the correction of an ALP. 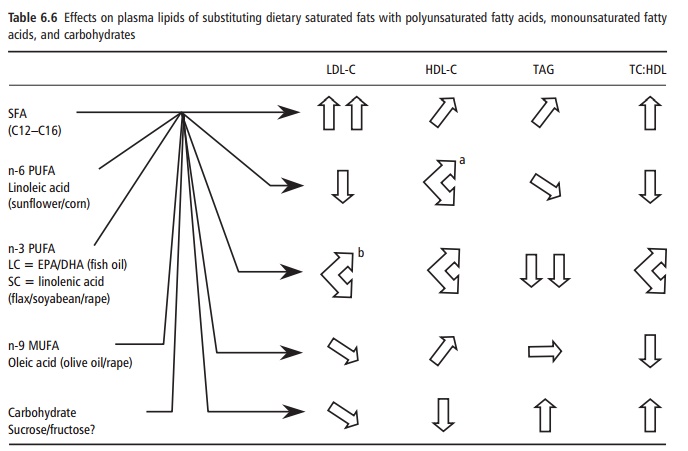