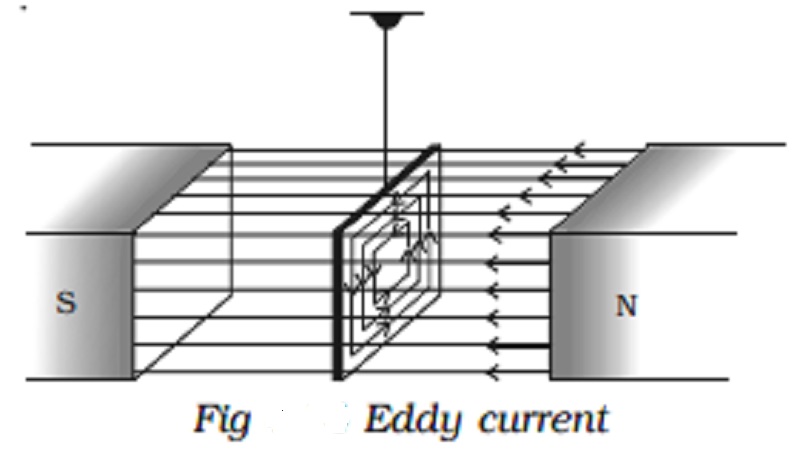 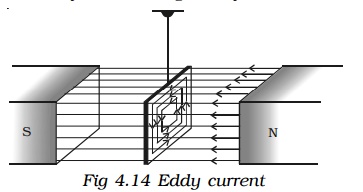 When a conductor in the form of a disc or a metallic plate as shown in Fig 4.14, swings between the poles of a magnet, eddy currents are set up inside the plate. This current acts in a direction so as to oppose the motion of the conductor with a strong retarding force, that the conductor almost comes to rest. If the metallic plate with holes drilled in it is made to swing inside the magnetic field, the effect of eddy current is greatly reduced consequently the plate swings freely inside the field. Eddy current can be minimised by using thin laminated sheets instead of solid metal.

When current is passed through a galvanometer, the coil oscillates about its mean position before it comes to rest. To bring the coil to rest immediately, the coil is wound on a metallic frame. Now, when the coil oscillates, eddy currents are set up in the metallic frame, which opposes further oscillations of the coil. This inturn enables the coil to attain its equilibrium position almost instantly. Since the oscillations of the coil die out instantaneously, the galvanometer is called dead beat galvanometer.

In an induction furnace, high temperature is produced by generating eddy currents. The material to be melted is placed in a varying magnetic field of high frequency. Hence a strong eddy current is developed inside the metal. Due to the heating effect of the current, the metal melts.

A metallic drum is coupled to the wheels of a train. The drum rotates along with the wheel when the train is in motion.When the brake is applied, a strong magnetic field is developed and hence, eddy currents are produced in the drum which oppose the motion of the drum. Hence, the train comes to rest.