Definition of Electric current and discription of Current Electricity

The branch of Physics which deals with the study of motion of electric charges is called current electricity. In an uncharged metallic conductor at rest, some (not all) electrons are continually moving randomly through the conductor because they are very loosely attached to the nuclei. The thermodynamic internal energy of the material is sufficient to liberate the outer electrons from individual atoms, enabling the electrons to travel through the material. But the net flow of charge at any point is zero. Hence, there is zero current. These are termed as free electrons. The external energy necessary to drive the free electrons in a definite direction is called electromotive force (emf). The emf is not a force, but it is the work done in moving a unit charge from one end to the other. The flow of free electrons in a conductor constitutes electric current.

The current is defined as the rate of flow of charges across any cross sectional area of a conductor. If a net charge q passes through any cross section of a conductor in time t, then the current I = q / t, where q is in coulomb and t is in second. The current I is expressed in ampere. If the rate of flow of charge is not uniform, the current varies with time and the instantaneous value of current iis given by, 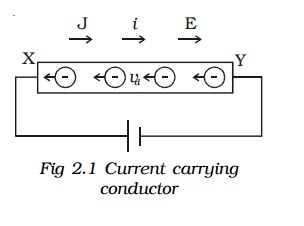 They do not produce current. But, as soon as an electric field is applied, the free electrons at the end Y experience a force F = eE in a direction opposite to the electric field. The electrons are accelerated and in the process they collide with each other and with the positive ions in the conductor.

Thus due to collisions, a backward force acts on the electrons and they are slowly drifted with a constant average drift velocity vdin a direction opposite to electric field.

Drift velocity is defined as the velocity with which free electrons get drifted towards the positive terminal, when an electric field is applied.

If τ is the average time between two successive collisions and the acceleration experienced by the electron be a, then the drift velocity is given by,

Current density at a point is defined as the quantity of charge passing per unit time through unit area, taken perpendicular to the direction of flow of charge at that point.

Current density is a vector quantity. It is expressed in A m�'2

3. Relation between current and drift velocity

Consider a conductor XY of length L and area of cross section A (Fig 2.1). An electric field E is applied between its ends. Let nbe the number of free electrons per unit volume. The free electrons move towards the left with a constant drift velocity vd.

The number of conduction electrons in the conductor = nAL

The charge of an electron = e

The total charge passing through the conductor q = (nAL) e

The time in which the charges pass through the conductor, t =L /vd

George Simon Ohm established the relationship between potential difference and current, which is known as Ohm’s law. The current flowing through a conductor is,

The law states that, at a constant temperature, the steady current flowing through a conductor is directly proportional to the potential difference between the two ends of the conductor.

Resistance of a conductor is defined as the ratio of potential difference across the conductor to the current flowing through it. The unit of resistance is ohm (Ω) 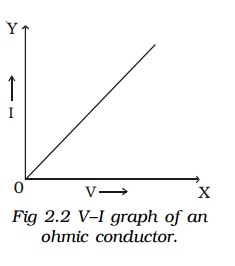 The reciprocal of resistance conductance. Its unit is mho (Ω�'1).

Since, potential difference proportional to the current I, the graph (Fig 2.2) between V and I is a straight line for a conductor. Ohm’s law holds good only when a steady current flows through a conductor.

ρ is called specific resistance or electrical resistivity of the material of the conductor.

The electrical resistivity of a material is defined as the resistance offered to current flow by a conductor of unit length having unit area of cross section. The unit of ρ is ohm�'m (Ω m). It is a constant for a particular material.

The reciprocal of electrical resistivity, is called electrical conductivity,

The resistivity of a material is the characteristic of that particular material. The materials can be broadly classified into conductors and insulators. The metals and alloys which have low resistivity of the order of 10�'6 �' 10�'8 Ω m are good conductors of electricity. They carry current without appreciable loss of energy. Example : silver, aluminium, copper, iron, tungsten, nichrome, manganin, constantan. The resistivity of metals increase with increase in temperature. Insulators are substances which have very high resistivity of the order of 108 �' 1014 Ω m. They offer very high resistance to the flow of current and are termed non�'conductors. Example : glass, mica, amber, quartz, wood, teflon, bakelite. In between these two classes of materials lie the semiconductors (Table 2.1). They are partially conducting. The resistivity of semiconductor is 10�'2 �' 104 Ω m. Example : germanium, silicon. 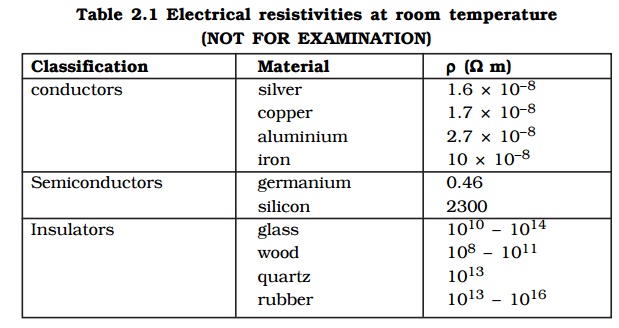