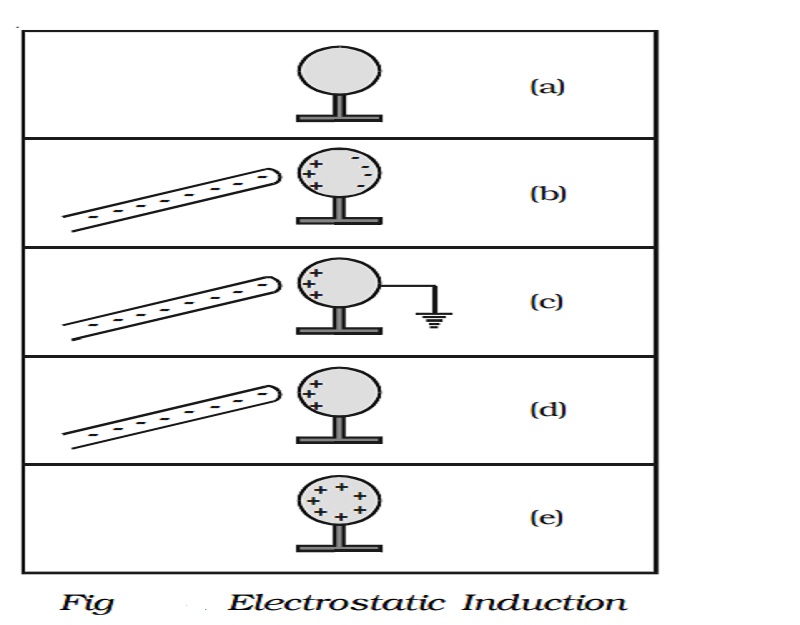 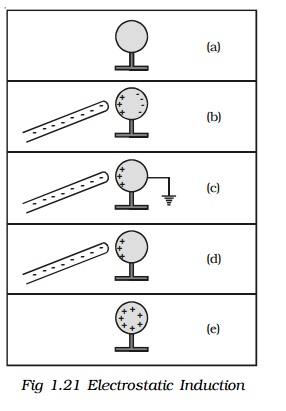 Fig 1.21 shows the steps involved in charging a metal sphere by induction.

a. There is an uncharged metallic sphere on an insulating stand.

b. When a negatively charged plastic rod is brought close to the sphere, the free electrons move away due to repulsion and start pilling up at the farther end. The near end becomes positively charged due to deficit of electrons. This process of charge distribution stops when the net force on the free electron inside the metal is zero (this process happens very fast).

c. When the sphere is grounded, the negative charge flows to the ground. The positive charge at the near end remains held due to attractive forces.

d. When the sphere is removed from the ground, the positive charge continues to be held at the near end.

e. When the plastic rod is removed, the positive charge spreads uniformly over the sphere.

1. Capacitance of a conductor 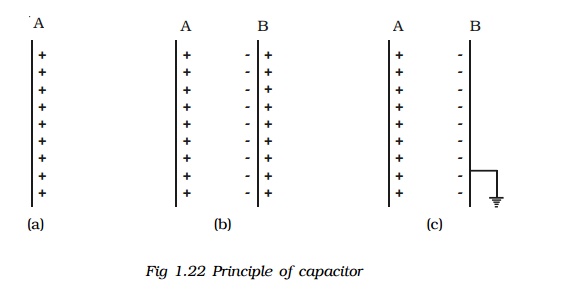 2. Capacitance of a parallel plate capacitor 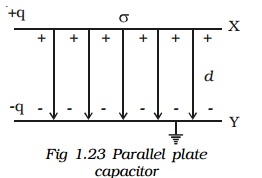 The parallel plate  capacitor consists of two parallel metal plates X and Y each of area A, separated by a distance d, having a surface charge density σ .  The  medium between the plates is air. A charge +q is given to the plate X. It induces a charge -q on the upper surface of earthed plate Y. When the plates are very close to each other, the field is confined to the region between them. The electric lines of force starting from plate X and ending at the plate Y are parallel to each other and perpendicular to the plates.

By the application of Gauss's law, electric field at a point between the two plates is, 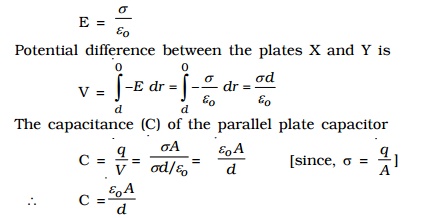 A dielectric is an insulating material in which all the electrons are tightly bound to the nucleus of the atom. There are no free electrons to carry current. Ebonite, mica and oil are few examples of dielectrics. The electrons are not free to move under the influence of an external field.

If a non polar dielectric is placed in an electric field, the centre of charges get displaced. The molecules are then said to be polarised and are called induced dipoles. They acquire induced dipole moment p in the direction of electric field (Fig 1.24).

A polar molecule is one in which the centre of gravity of the positive charges is separated from the centre of gravity of the negative charges by a finite distance. Examples : N2O, H2O, HCl, NH3. They have a permanent dipole moment. In the absence of an external field, the dipole moments of polar molecules orient themselves in random directions. Hence no net dipole moment is observed in the dielectric. When an electric field is applied, the dipoles orient themselves in the direction of electric field. Hence a net dipole moment is produced (Fig 1.25).

The alignment of the dipole moments of the permanent or induced dipoles in the direction of applied electric field is called polarisation or electric polarisation.

The magnitude of the induced dipole moment p is directly proportional to the external electric field E.

p α E or p = α E, where α is the constant of proportionality and is called molecular polarisability. 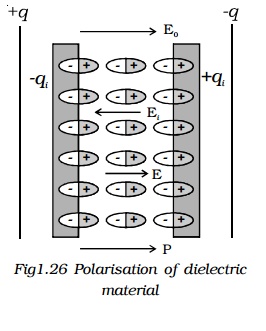 Consider a parallel plate capacitor with +q and -q charges. Let Eo be the electric field between the plates in air. If a dielectric slab is introduced in the space between them, the dielectric slab gets polarised. Suppose +qi and -qi be the induced surface charges on the face of dielectric opposite to the plates of capacitor (Fig 1.26). These induced charges produce their own field Ei which opposes the electric field Eo. So, the resultant field, E < Eo. But the direction of E is in the direction of Eo.

(? Ei  is opposite to the direction of Eo)

5. Capacitance of a parallel plate capacitor with a dielectric medium.

Consider a parallel plate capacitor having two conducting plates X and Y each of area A, separated by a distance d apart. X is given a positive charge so that the surface charge density on it is ? and Y is earthed.

Let a dielectric slab of thick-ness t and relative permittivity ?r be introduced between the plates (Fig.1.27).

Thickness of air gap = (d-t) Electric field at any point in the air between the plates, 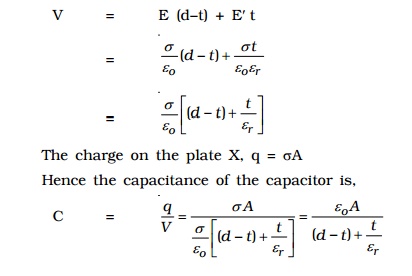 In capacitors, the region between the two plates is filled with dielectric like mica or oil.

since, εr > 1 for any dielectric medium other than air, the capacitance increases, when dielectric is placed.

(i) They are used in the ignition system of automobile engines to eliminate sparking.

(ii) They are used to reduce voltage fluctuations in power supplies and to increase the efficiency of power transmission.

(iii) Capacitors are used to generate electromagnetic oscillations and in tuning the radio circuits.

7. Capacitors in series and parallel

(i) Capacitors in series

The potential difference across each capacitor is,

If CS, be the effective capacitance of the series combination, it should acquire a charge q when a voltage V is applied across it. 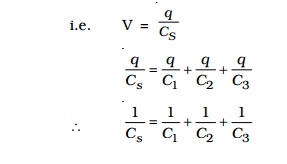 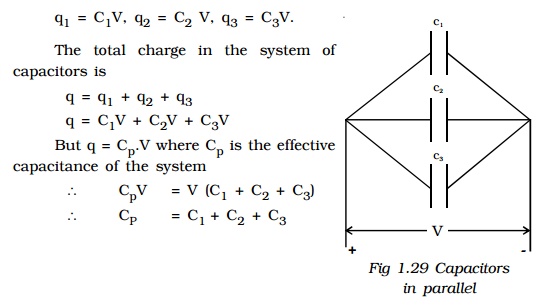 8. Energy stored in a capacitor

9. Distribution of charges on a conductor and action of points

Let us consider two conducting spheres A and B of radii r1 and r2 respectively connected to each other by a conducting wire (Fig 1.30). Let r1 be greater than r2. A charge given to the system is distributed as q1 and q2 on the surface of the spheres A and B. 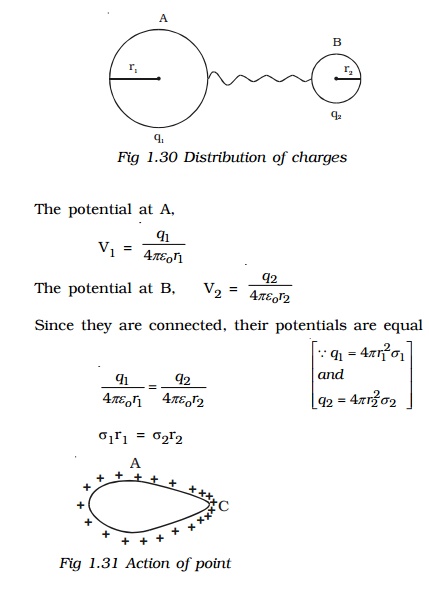 i.e., σr is a constant. From the above equation it is seen that, smaller the radius, larger is the charge density.

In case of conductor, shaped as in Fig.1.31 the distribution is not uniform. The  charges accumulate to a maximum at the pointed end where the curvature is maximum or the radius is minimum. It is found experimentally that a charged conductor with sharp points on its surface, loses its charge rapidly.

Thus, the leakage of electric charges from the sharp points on the charged conductor is known as action of points or corona discharge. This principle is made use of in the electrostatic machines for collecting charges and in lightning arresters (conductors).