Rivers of Tamil Nadu are its lifeline. Though it has many rivers, the rivers of Cauvery, Palar, Ponnaiyar, Vaigai and Thamirabarani are the notable ones.

The river Cauvery originates at Talacauvery in the Brahmagiri hills of Kodagu(coorg) district of Karnataka in the Western Ghats. Total length of Cauvery river is 805 km. About 416 km of its course falls in Tamil Nadu. It serves as the boundary between Karnataka and Tamil Nadu for a distance of 64 km. It forms Hogenakkal waterfalls in Dharmapuri district. Mettur Dam, also called as the Stanley Reservoir, is located across this river in Salem district. A tributary called Bhavani joins Cauvery on the right bank about 45 km from the Mettur Reservoir. Thereafter, it takes easterly course to enter into the plains of Tamil Nadu. Two more tributaries, Noyyal and Amaravathi, confluence the river on the right bank at Thirumukkudal 10 km from Karur. The river is wider in this region, where it is called as ‘Agandra Cauvery’.

In Tiruchirappalli district, the river branches into two parts. The northern branch is called Coleroon or Kollidam and the southern branch remains Cauvery. From here, the Cauvery delta begins. After flowing for about 16 km, the two branches join again to form the ‘Srirangam Island’. The Grand Anaicut, also called as Kallanai was built across the river Cauvery. After Kallanai, the river breaks into a large number of distributaries and forms a network all over the delta. The network of distributaries within the delta of Cauvery in the coast is called as the ‘ Garden of Southern India ’. It merges into Bay of Bengal to the south of Cuddalore.

The Palar river rises beyond Talagavara village in the Kolar district of Karnataka. The Palar drains an area of 17,871 sq.km, out of which nearly 57% lies in Tamil Nadu and the rest in the states of Karnataka and Andhra Pradesh. Ponnai, Goundinya Nadhi, Malattar, Cheyyar and Kiliyar are its major tributaries. Its total length is 348 km, out of which 222 km of its course falls in Tamil Nadu. It flows through the districts of Vellore and Kancheepuram before entering into Bay of Bengal near Kuvattur.

It originates from the eastern slope of Nandi Durga hills in eastern Karnataka. It drains an area of 16,019 sq.km, of which nearly 77% lies in Tamil Nadu. It flows for a distance of 247 km in the southeasterly direction in the districts of Krishnagiri, Dharmapuri, Vellore, Tiruvannamalai, Cuddalore and Villupuram. It branches into two, viz. Gadilam and the Ponnaiyar near Tirukoilur Anaicut. Gadilam joins the Bay of Bengal near Cuddalore and Ponnaiyar near the Union Territory of Puducherry. Chinnar, Markandanadhi, Vaniar and Pambar are its tributaries. Heavy rain at the river’s source cause sudden but short-lived floods. The river is extensively dammed for irrigation, especially in Tamil Nadu. There are reservoirs at Krishnagiri and Sathanur across this river. The Ponnaiyar is considered sacred by Hindus and festivals are held during the Tamil month of Thai (January– February).

Vaigai river rises from the eastern slopes of the Varusanadu hills of Western Ghats of Tamil Nadu. It drains an area of 7,741 sq.km, which lies entirely in the state of Tamil Nadu. It flows through the districts of Madurai, Sivaganga and Ramanathapuram. Its length is 258 km. It discharges its water into the Ramnad Big Tank and some other small tanks. The surplus water from the tanks is finally discharged into Palk Strait near Ramanathapuram..

The name is interpreted as Thamiram (copper) and Varuni (streams of river). The water of this river gives a copper like appearance due to the presence of dissolved suspended red soil. It originates from a peak in Pothigai hills on the Western Ghats above Papanasam in the Ambasamudram taluk. The origin of the river is associated with Sage Agasthiyar. It courses through the districts of Tirunelveli and Thoothukudi and finally flow into the Bay of Bangal near Punnaikayal in Thoothukudi district. Karaiyar, Servalar, Manimuthar, Gadananathi, Pachaiyar, Chittar and Ramanathi are its main tributaries. It is the only perennial river in South India. 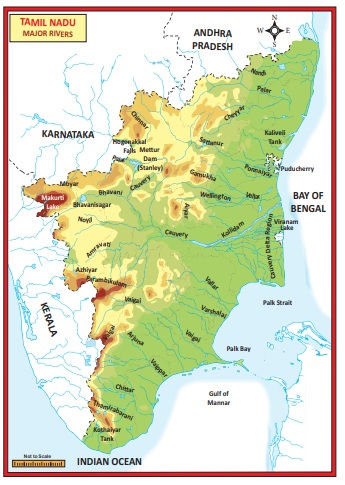 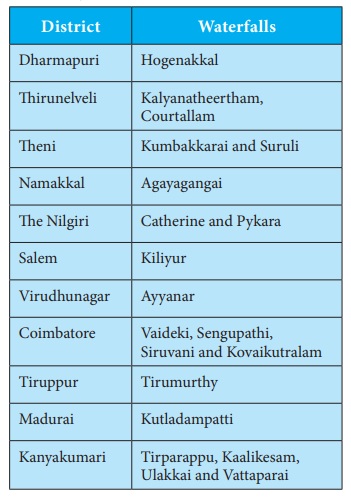 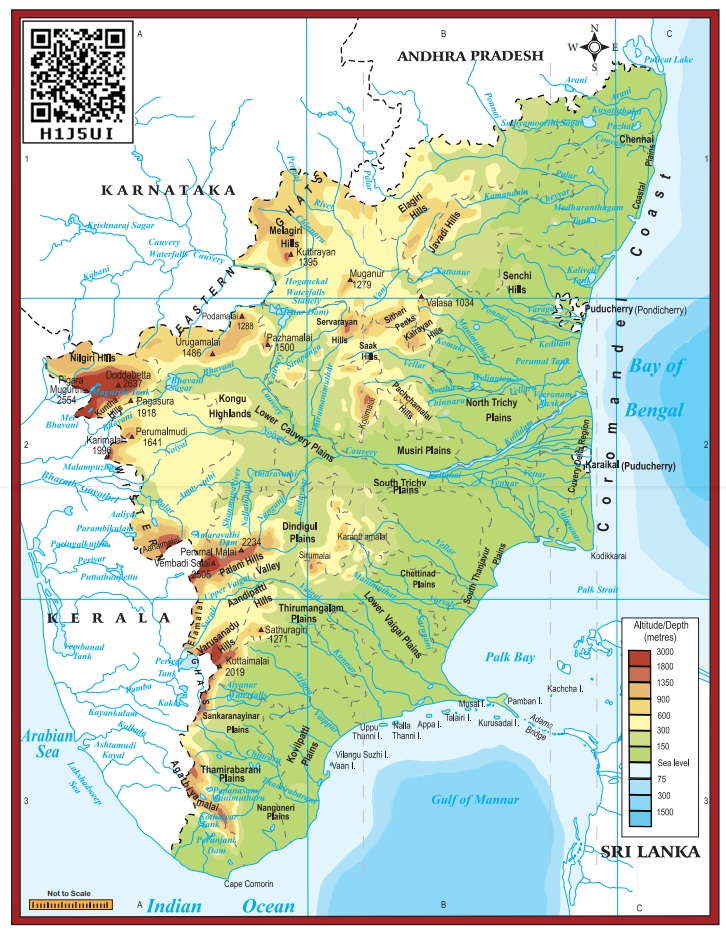