Tropic of Cancer divides India roughly into two equal parts and the state Tamil Nadu lies to the south of Tropic of Cancer, which is near the Equator.

You have already learnt that the Tropic of Cancer divides India roughly into two equal parts and the state Tamil Nadu lies to the south of Tropic of Cancer, which is near the Equator. As it receives vertical sunrays, the temperature of the state is relatively high throughout the year. Though the state falls within the hot climatic zone, the east coast of Tamil Nadu enjoys tropical maritime climate. The Bay of Bengal and Indian Ocean influence the climate of the coastal regions.

While the east coast experiences tropical maritime climate, the western region of the state enjoys the mountainous climate. Low altitude and distance from the sea are the reasons for high temperature and dry conditions in the central part of Tamil Nadu. The migration of vertical sun’s rays leads to the formation of different seasons in Tamil Nadu as follows. 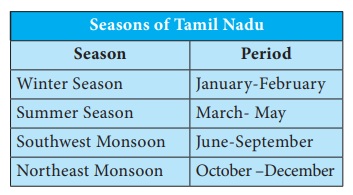 During January and February, the vertical rays of the sun fall between the Tropic of Capricorn and the Equator. Hence, Tamil Nadu and India on the whole receive slanting rays from the sun. So, the weather is slightly cooler during these months. Winter temperature in Tamil Nadu varies from 15°C to 25°C. However, in the hill stations, the winter temperature drops below 5°C occasionally. Some valleys in the Nilgiris record even 0°C. This drop in temperature leads to the formation of thick mist and frost. This season is practically dry.

The apparent migration of the sun towards north during March, April and May results in the reception of vertical sun’s rays by South India. Thus there is a steady rise in temperature from the equator. Hence, Tamil Nadu located to the south of Tropic of Cancer, experiences high temperature. Generally the temperature varies from 30°C to more than 40°C. During this season particularly in the month of May, southern part of the state receives some rainfall from pre- monsoon showers (Mango/ Blossom showers) and some parts experience convectional rainfall.

1. What is Agni Nakshatram?

2. Group the districts of Tamil Nadu into low, moderate and heavy rainfall regions.

The intense heating of the landmass of the north by the sun during March to May creates a well-developed low pressure in North India, which draws wind from the Indian Ocean. This results in the formation of southwest monsoon. During this season, Tamil Nadu is located in the rain shadow region for the wind, which blows from the Arabian Sea. As a result, Tamil Nadu receives only a meagre rainfall from this monsoon. Rainfall during this season decreases from west to east. Coimbatore plateau receives an average of 50 cm rainfall. However, the southern districts like Kanyakumari, Tirunelveli and The Nilgiris record 50–100 cm rainfall during this period. The rainfall is scanty in the eastern part of the state.

Tropical cyclones are common during this season. Cyclone originating from the Bay of Bengal bring heavy rainfall to the east coastal regions of Tamil Nadu. More than 50% of the state’s rainfall is received from tropical cyclones during this period and east coastal region receives 100 to 200 cm of rainfall. The rainfall received by the central and northwestern parts is 50–100 cm. The cyclones sometimes disturb the cultivation of crops and cause severe damage to life and property.