In unit 4, we studied Faraday’s law of electromagnetic induction which states that the change in magnetic field produces an electric field. Mathematically 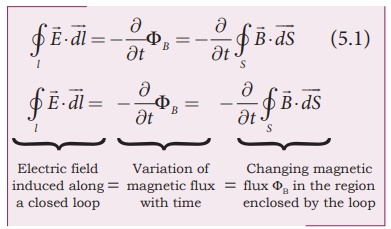 where Φ is the magnetic flux and ∂/∂t is the partial derivative with respect to time. Equation (5.1) means that the electric field

is induced along a closed loop by the changing magnetic flux ΦB in the region encircled by the loop. Now the question asked by James Clerk Maxwell is ‘Is converse of this statement true?’ Answer is ‘yes’. He showed that the change in electric field also produces magnetic field which is 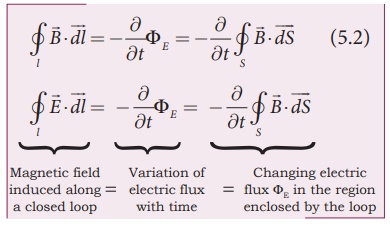 where ΦB is the electric flux. This is known as Maxwell’s law of induction, which explains that the magnetic field

induced along a closed loop by the changing electric flux ΦE in the region encircled by that loop. This in turn, explains the existence of radio waves, gamma rays, infrared rays, etc.

In order to understand how the changing electric field produces magnetic field, let us consider a situation of ‘charging a parallel plate capacitor’ shown in Figure 5.3 Assume that the medium in between the capacitor plates is a non-conducting medium. 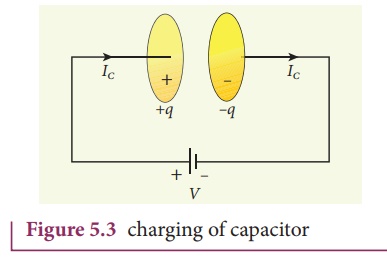 The electric current passing through the wire is the conduction current IC. This current generates magnetic field around the wire (refer Unit 3) connected across the capacitor. Therefore, when a magnetic needle is kept near the wire, deflection is observed. In order to compute the strength of magnetic field at a point, we use Ampere's circuital law (from Unit 3) which states that ‘the line integral of the magnetic field

around any closed loop is equal to µo times the net current I threading through the area enclosed by the loop’. Ampere's law in equation form is 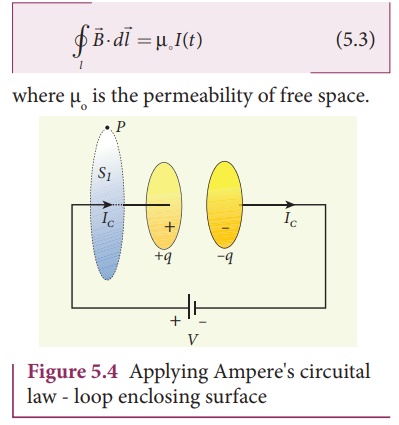 where µo is the permeability of free space.

To calculate the magnetic field at a point P near the wire as shown in Figure 5.4, let us draw an amperian loop (circular loop) which encloses the surface S1 (circular surface). Therefore, using Ampere's circuital law (equation 5.3), we get

where Ic is the conduction current.

Suppose the same loop is enclosed by balloon shaped surface S2 as shown in Figure 5.5. This means that the boundaries of two surfaces S1 and S2 are same but shape of the enclosing surfaces are different (first surface (S1) is circular in shape and second one is balloon shaped surface (S2)). As the Ampere’s law applied for a given closed loop does not depend on shape of the enclosing surface, the integrals will give the same answer. But by applying Ampere’s circuital law (equation 5.3), we get 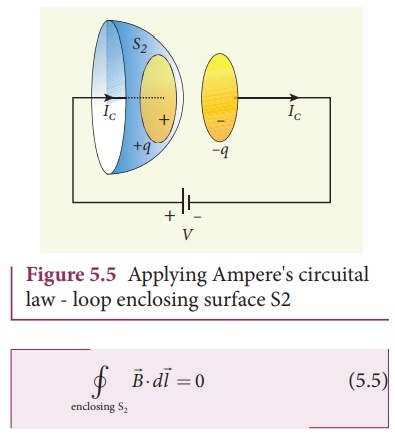 The right hand side of equation is zero because the surface S2 no where touches the wire carrying conduction current and further, there is no current in between the plates of the capacitor (there is a discontinuity). So the magnetic field at a point P is zero. Hence there is an inconsistency between equation (5.4) and equation (5.5). J. C.Maxwell resolved this inconsistency as follows: 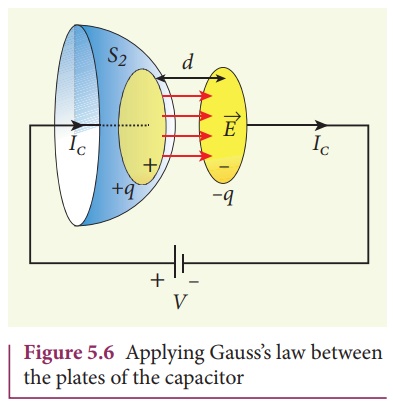 From Gauss’s law (refer Unit 1), the electric flux between the plates of the capacitor (Figure 5.6) is

where A is the area of the plates of capacitor.

The change in electric flux is

Consider a parallel plate capacitor which is maintained at potential of 200 V. If the separation distance between the plates of the capacitor and area of the plates are 1 and 20 cm2. Calculate the displacement current for the time in µs.

Potential difference between the plates of the capacitor, V = 200 V

The distance between the plates,

Area of the plates of the capacitor,