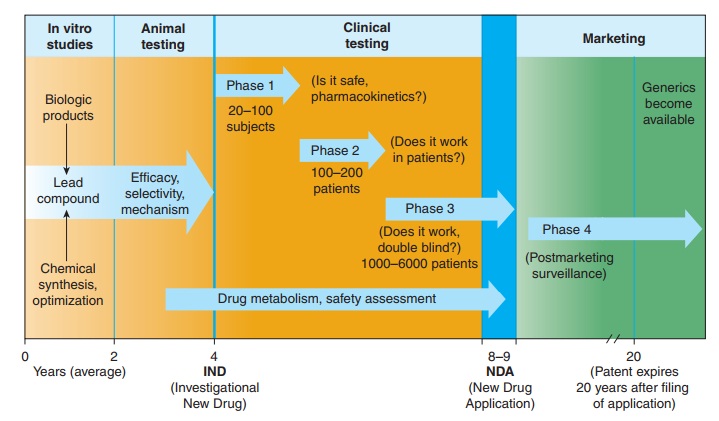 A few useful drugs have been known since humans first began ingesting or injecting substances and recording the results.

A few useful drugs have been known since humans first began ingesting or injecting substances and recording the results (see The History of Pharmacology), but the majority of agents in current use have been developed during the last 100 years using a variety of pharmacologic and toxicologic techniques. These new chemicals and the efforts to market them have in turn led to a variety of methods of legal regulation. The most common first steps in the development of a new drug are the discovery or synthesis of a potential new drug com-pound or the elucidation of a new drug target. When a new drug molecule is synthesized or discovered, subsequent steps seek an understanding of the drug’s interactions with its biologic targets. Repeated application of this approach leads to compounds with increased efficacy, potency, and selectivity (Figure 5–1). In the United States, the safety and efficacy of drugs must be defined before marketing can be legally carried out. In addition to in vitro studies, relevant biologic effects, drug metabolism, pharmacoki-netic profiles, and particularly an assessment of the relative safety of the drug must be characterized in vivo in animals before human drug trials can be started. With regulatory approval, human test-ing may then go forward (usually in three phases) before the drug is considered for approval for general use. A fourth phase of data gathering and safety monitoring is becoming increasingly impor-tant and follows after approval for marketing. Once approved, the great majority of drugs become available for use by any appropri-ately licensed practitioner. Highly toxic drugs that are nevertheless considered valuable in lethal diseases may be approved for restricted use by practitioners who have undergone special train-ing in their use and who maintain detailed records. 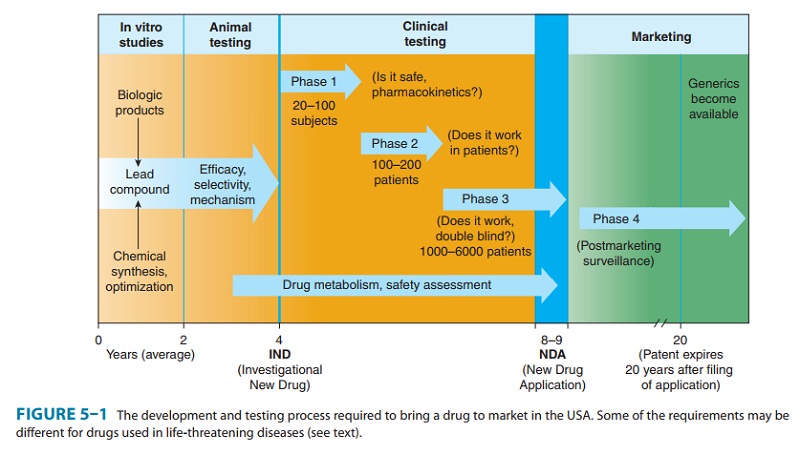